Perdue said to sense 'call of God' to Trump cabinet 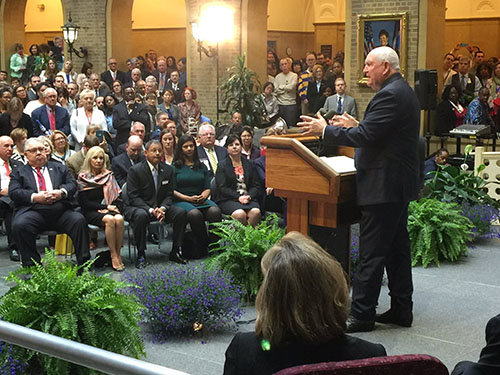 "Happy to be on the job @USDA and meet employees for 1st time. Want to leave our nation, fields & farms in better shape than we found them," new Secretary of Agriculture Sonny Perdue posted on Twitter shortly after being officially announced at the position. TWITTER/@SecretarySonny
Posted Monday, May 1, 2017 10:43 am
Baptist Press

Sonny Perdue, who was sworn in as secretary of agriculture April 25, is a member of Second Baptist Church in Warner Robins. The pastor, his son Jim Perdue, told Baptist Press the congregation plans to hold a worship service commissioning the former Georgia governor and his wife Mary to their new field of service.

A date for the commissioning service has yet to be determined.

Sonny Perdue's "faith in the Lord guides his decisions about where to go and what to do," Jim Perdue said. "When people ask him, 'How can we pray for you?' one of his first responses is, 'Pray for my obedience.' He wants to be obedient, and I believe that was part of" his decision to accept President Trump's nomination.

Since Trump announced his intention to nominate Perdue as secretary of agriculture Jan. 18, Second Baptist members have had numerous occasions to pray for him. Shortly following the announcement, Jim Perdue called his parents to come forward at the end of a worship service, and pastors, deacons, and members of the Sunday School class the Perdues teach gathered around them for prayer.

Over the next three months, Sonny and Mary Perdue "have had phone calls and cards and an abundance of people reaching out to them and just letting them know that 'we're praying for you; we're here for you,'" Jim Perdue said.

Sonny Perdue told BP in a statement the U.S. Department of Agriculture's motto of "do right and feed everyone" comprises "fundamentally biblical principles."

"At my inaugural prayer service in 2003 I was challenged by Micah 6:8, 'Do justice; love mercy, and walk humbly with your God,'" Sonny Perdue said. "I have endeavored to live by these words as a husband, father and leader. I'm grateful for the opportunity the Lord has given me and recognize the stewardship of my new role. My father taught me something very simple, and the Bible backs this up: leave it better than you found it. If we do that, we'll be doing our jobs."

Sonny and Mary Perdue have been members of Second Baptist since the late 1980s, said Jim Perdue, who became the church's pastor in 2012. When Perdue served as governor from 2003-11, he and Mary transferred their membership to Atlanta-area First Baptist Church in Woodstock,  which was nearer to the state capitol. After he left office, they returned to Warner Robins, some 100 miles south of Atlanta.

At Second Baptist, Sonny Perdue has served as a deacon and Sunday School teacher.

His faith garnered national headlines in 2007, when he held a lunch-hour prayer meeting on the state capitol steps to ask God for rain in the midst of a historic drought. Then-Gov. Perdue prayed at the gathering, "God, we need you. We need rain," according to The Atlanta Journal Constitution.

The prayer gathering of some 250 Georgia residents also drew approximately 20 protestors, according to a BP report at the time. Among the protestors' signs was one that read "20% chance of rain today, 100% chance of church-state violation."

The month following the prayer gathering was "wetter than normal," the AJC reported, and most lakes and rivers had returned to normal levels two years later.

Following Perdue's 87-11 U.S. Senate confirmation as secretary of agriculture, Index editor Gerald Harris wrote, "One of the best things about Secretary Sonny Perdue is that he knows the source of our strength and power. 'Our greatness does not come from our government,' he admits. His life is a witness that our source of power comes from God."

Jim Perdue said his father's faith "is not for the sake of political expedience."

Perdue is at least the third member of Trump's cabinet with Southern Baptist ties. Environmental Protection Agency administrator Scott Pruitt is a member of First Baptist Church in Broken Arrow, OK and Health and Human Services secretary Tom Price is a regular attendee at Johnson Ferry Baptist Church in Marietta.