Picking up the pieces in El Paso

Law enforcement personnel move in to engage a shooter Aug. 3. Southern Baptists David and Beverly Engle, members of Cross Church in Arkansas on the way home after ministry at the border, had entered the store moments before the shooting began. SCREEN GRAB/CNN
Posted Monday, August 12, 2019 8:52 am
Baptist Press

EL PASO, Texas (BP) — Beverly Engle snapped a photo of the El Paso Walmart as she and her husband David walked in Aug. 3 to grab some vitamin water.

She meant to post it on Facebook to say it was the Southern Baptist couple's last stop on the way home to Arkansas after ministering to migrants at a center near the Mexican border. But minutes later the couple was caught up in tragedy as a shooter opened fire in the store. The Engles and other customers, some injured, were ushered out a back door and to a nearby Sam's Club by Walmart employees.

"You all know the rest," Beverly Engle wrote when she finally posted the photo of Walmart hours later. "We were inside but we are OK."

The Engles – who attend Cross Church of Northwest Arkansas and serve as executive directors of Restoration Village, an organization that helps women and children leave abusive homes – are among many who have the emotional effects of the day to deal with in the coming months. The shooting left 22 dead, dozens injured, and a lot of family and friends to pick up the pieces. See related Baptist Press story of how Southern Baptists have responded to the tragedy.

David Engle said he has a picture emblazoned in his mind of the soccer coach he talked to as he entered the store that day. The coach and some children – whose table can be seen in Beverly Engle's photo of Walmart – were raising money for their soccer team, and David Engle had struck up a conversation with him and planned to make a donation as they left. The coach was killed minutes later.

"If I was an artist, I could draw a picture of the coach and others," David Engle told the Arkansas Democrat-Gazette. "They are still in my mind."

Needs for prayer and counseling

Jorge Diaz, pastor of Congregación Hispana Internacional Semilla de Mostaza (Mustard Seed), said the greatest needs in the El Paso community right now are to help those in need of prayer and counseling – those who lost loved ones or are otherwise traumatized by the crisis. 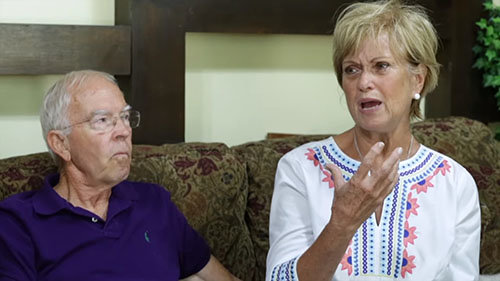 David and Beverly Engle – who attend Cross Church of Northwest Arkansas and serve as executive directors of Restoration Village, an organization that helps women and children leave abusive homes – share their story of the Aug. 3 shooting at an El Paso, Texas, Walmart. Screen capture from Arkansas Online

Volunteers set up immediately to meet the physical needs of victims Aug. 3, handing out water near the site of the shooting. The Engles themselves joined the effort that day when they recognized some of the volunteers from their work at the border.

Diaz also noted that local businesses had stepped up to offer help such as free funeral services.

"The physical needs are more or less resolved," he said, noting that he had reached out immediately to the 20 pastors in his network to see if any of their congregations were directly affected. No one was.

"For us, the most important thing is to meet spiritual and emotional needs, to go now and share consolation and hope from the Lord," Diaz said. "We are in the process of providing materials and brochures and also providing pastors with some sermons they can preach to their congregation in this time of healing."

A group of about 20 local Hispanic pastors plus area Christian students met this weekend to train in crisis counseling so that they can go out and visit affected families and others in the community. They also plan to set up stations in the area where people can come up to them and get prayer and talk if needed.

Chaplains with the Southern Baptists of Texas Convention (SBTC) Disaster Relief arrived in El Paso on Wednesday, Aug. 7 to comfort mourners. Volunteers with Texas Baptist Men also set up at a local shopping center this week to serve first responders and families affected.

Chuy Avila, a church planter strategist in the area for the SBTC, said it is a "big crisis, but also the crisis brings some opportunity to share the hope of Jesus Christ."

The community "is ready now for harvest," he said.

Grace Thornton is a writer based in Birmingham, Alabama.