FORSYTH — Camp Kaleo Director Mike Flowers knew it wasn’t going to be a normal week when one camper walked around with a light bulb protruding from the top of his black hat. It occasionally turned itself on.

Then campers got into a pie fight, slinging pies at each other and coating themselves with fluffy white cream topping. Another walked around on stilts.

But perhaps the most unusual sight was when another camper ate a half-dozen napkins and then pulled them out of his mouth in a continuous chain. Flowers caught that one on video, should anyone ever doubt him. 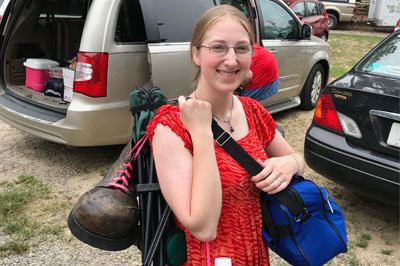 Naomi Walsh, one of the youngest clowns at Kaleo, drove 17 hours from Wisconsin with her 7-member clown family. JOE WESTBURY/Index

The camp has hosted hundreds of groups through Flowers’ 17 years of service at the Middle Georgia facility, but he had to admit it. This group beat them all.

For the past week 110 clowns made the camp their home, adding new antics to their repertoire and learning new  ways to apply clown paint – also known as makeup – that would transform them into totally unrecognizable personalities.

It’s easy to say that there was plenty of smiles and laughs to last a lifetime packed into those five days under the gently swaying pines. The group will leave later today for their homes, better equipped to bring riotous laughter into the lives of their audiences.

Clowns from around the nation and as far away as Canada descended on the Georgia Baptist camp to make new friends and renew old acquaintances. Summer camp has a way of doing that to those who attend and return again and again. It’s a peaceful setting, quiet at times as the wind blows through the pines.

But this week the members of American Clown Academy 2.0 had the camp to themselves as more traditional campers headed back to school. The campers names were different this week, for sure. 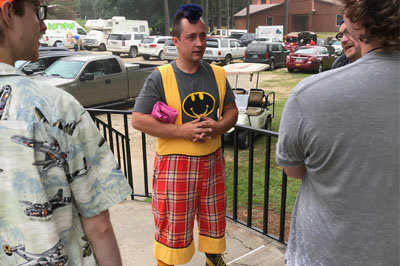 Charles Lauder came from Canada for insight on how to be a better clown entertainer. JOE WESTBURY/Index

“Shorty” and “Sprinkles” made a relatively short drive up from Jacksonville, FL in their clown car, a small vehicle covered with bright circular spots with a wind-up key on the back. The Walsh Family of clowns – all seven of them – drove nearly 18 hours from Wisconsin. Kornpop, who legally changed his first name to that unusual moniker, came in from Tyler, TX.

And Lew-e, organizer of the group who lives nearby in Forsyth, drove 17 hours straight from a performance in Coldwater, MI and a performance at the state fair.

One thing all the clowns had in common was their desire to make people laugh and forget their problems. Several said without that goal they have little reason to get out of bed each morning.

Kornpop took a breather from inflating 1,500 balloons – some with a mechanical air pump, others with assistance of his own lungs – that would be dropped on an audience in the Forsyth Performing Arts center later that night. The clowns were presenting the event as a community fundraiser.

The Texan legally changed his name to honor his mentor – by the name of Popcorn – who taught him how to move from simply being mischievous to being a quality entertainer. When the judge asked him why he wanted to change his name, he had the answer the judge couldn’t refuse. 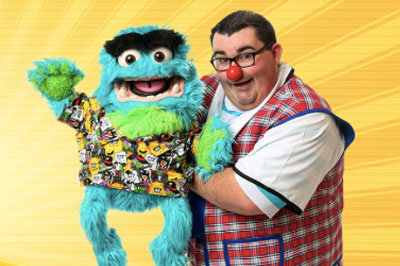 Lew-e, aka Lee Andrews from Forsyth, has been clowning for 23 of his 26 years. He is a member of Garen Hill Baptist Church. ANDREW PRODUCTIONS.ORG/Special

“I clown to make people smile. I don’t get out of bed if I can’t make someone smile that day, so I don’t spend much time in bed. My wife Julie travels with me and we make a great team,” he said, reflecting back on 30 years of wearing outrageous colorful clothes and traditional white face makeup.

Lee Andrews, aka Lew-e, has been clowning since he was 3 years old and is in his 23rdyear in the joyous profession.

“I’m not talking about just wanting to be a clown but actually having the rubber nose, big shoes … the real deal. The fact that you can make people happy, distract them for a while from their problems, is a powerful gift.”

Lew-e was first attracted to clowning as a child, watching the Super Sunday Bozo Show out of Chicago, which was carried on the local Forsyth television station. Bozo was perhaps the nation’s most cherished clown for children and the character was eventually franchised nationwide. He was eventually as common as Santa Claus.

“One day after watching the show I turned to my Dad and told him I wanted to be a clown. He decided to humor me and rather than saying ‘no,’ he replied with “OK, let’s make this happen.’ I’m sure he thought it was going to be another childhood phase I would grow out of,” he explains. 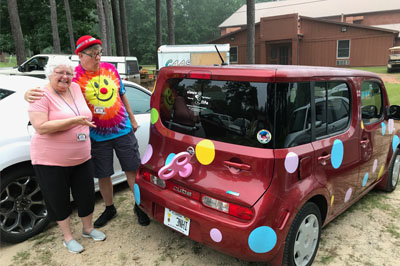 Shorty and Sprinkles drove from Jacksonville, FL for the clown training event. It will be repeated next year at Kaleo. JOE WESTBURY/Index

After about a decade of showing unrelenting interest his father realized it was not just a fad. He was actually raising a clown.

In 2009 Lew-e joined Garden Hill Baptist Church in Forsyth to be closer to Rebecca, his high school sweetheart. Three years later her father, Mike McMullen and pastor of the church, married the couple.

“I never had a real job, I just love this calling to entertaining and bringing laughter to the world. I perform 525 shows each year at more than 325 venues. Rebecca is a tremendous help to me with that … we make a great team,” he boasts. We travel with a 40-foot drop down stage trailer and perform at libraries, school educational programs, state fairs and all kinds of festivals.

Lew-e, who organized the Kaleo event, said clowns have their own subculture. They have introverts as well as extroverts among their ranks, but there is something about putting on the wild and crazy clothes and the face paint that puts all of their own personal problems in the background. They are empowered by the joy they bring to others and feed on that sense of satisfaction of making the world a happier place. 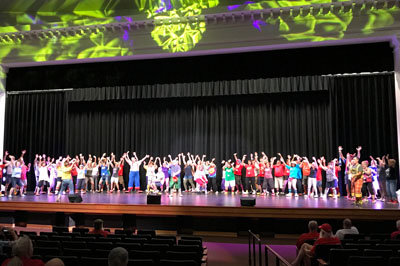 One-hundred-ten clowns sing and dance on the stage in rehearsal at the new Performing Arts Center in Forsyth. JOE WESTBURY/Index

Clowns like Lew-e also have a deeper spiritual purpose.

“I’m not a Christian clown because that would negate some of the message I try to convey. I see myself as a Christian who is a clown. I don’t see that as being ‘bait-and-switch’ but as a more important way to convey biblical to my audience, whether that is children or their parents who are watching as well.”

And now at age 26 with Rebecca at this side, he is looking forward to his own ministry of sharing Christ along with a hearty dose of antics that appeal to the very young as well as the young at heart.