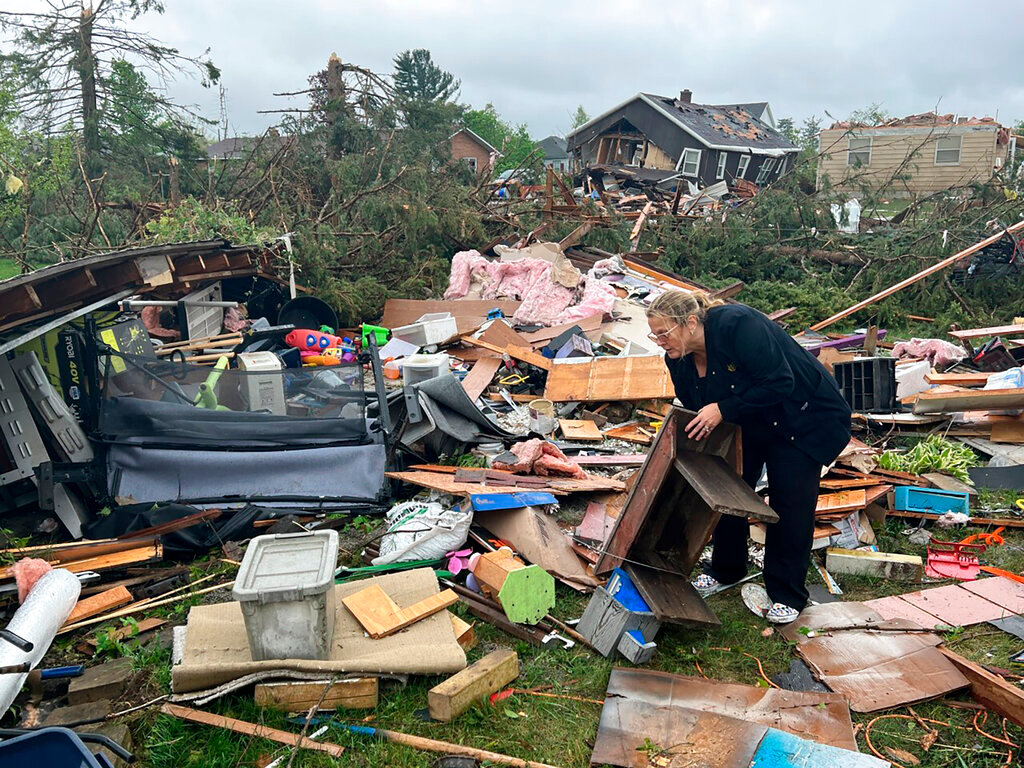 Theresa Haske sorts through debris from what was her garage, after a tornado tore through Gaylord, Mich., Friday, May 20, 2022 A tornado that hammered a northern Michigan town has injured at least 23 people and killed at least one other. Munson Healthcare spokesman Brian Lawson said Friday that he had no details about the person who was killed or the conditions of those who were hurt by the tornado that rushed through Gaylord, a city of about 4,200, at about 3:45 p.m. (John Russell/The Detroit News via AP)
John Russell
Posted Saturday, May 21, 2022 5:36 pm

GAYLORD, Mich. (AP) — A second person died in a tornado that hit northern Michigan, authorities reported Saturday, as crews searched a mobile home park that was virtually destroyed by a rare twister in an area with no weather sirens.

The person, who was in their 70s, lived in the Nottingham Forest mobile home park in Gaylord, which was among the first sites hit by the tornado Friday afternoon, said state police Lt. Derrick Carroll.

The first reported death, another person in their 70s, also lived there, Carroll said.

“There have been trailers picked up and turned over on top of each other. Just a very large debris field,” said Chris Martin, Otsego County fire chief. “Crews are in there right now doing a secondary search with heavy equipment.”

He said there's “probably 95% destruction in there.”

More than 40 people were injured. Carroll said at least one person was not accounted for by Saturday morning, though that person didn't live in the mobile home park.

Gov. Gretchen Whitmer declared a state of emergency, making further state resources available. Electricity was out for thousands of people in the area, and some roads still were clogged with downed poles and other wreckage.

“We have a lot of debris to clear,” Carroll said.

Indeed, roofs and walls at some businesses in the tornado's path were shredded. Cars and trucks were turned on their sides or completely flipped over. Video posted online showed a dark funnel cloud approaching as anxious drivers looked on or slowly drove away.

The National Weather Service pegged the tornado as EF3, on a scale of 0-5, with maximum winds of 140 mph.

Betty Wisniewski, 87, avoided injury even though the tornado significantly damaged her house, said son Steve Wisniewski, who lives next door.

“Luckily she was OK — rosary in hand,” he said from a ladder while attaching plastic to his windows. “She was praying. Pretty amazing.”

“We were searching in places where we knew the occupants. We were calling them out by name,” Claeys said. “It's a lot more personal when our officers know the people who live in those homes.”

Gaylord doesn’t have tornado sirens. Carroll said anyone with a mobile phone got a “code red” warning from the weather service about 10 minutes before the tornado struck.

John Boris of the weather service post in Gaylord said the tornado passed through the community in about three minutes but was on the ground in the region for 26 minutes — a “fairly long” time.

“We don’t get a whole lot of tornadoes,” said Boris, science and operations officer. “In the state of Michigan, in general, we typically average about 15 or so (a year) and more of those are downstate than they are up to the north. It’s pretty unusual.”

A link to climate change probably doesn't fit, he said.

“It's very difficult to attribute something very specific like this to a large-scale signal like that,” Boris said. “If we had these more frequently, that may be a signal.”