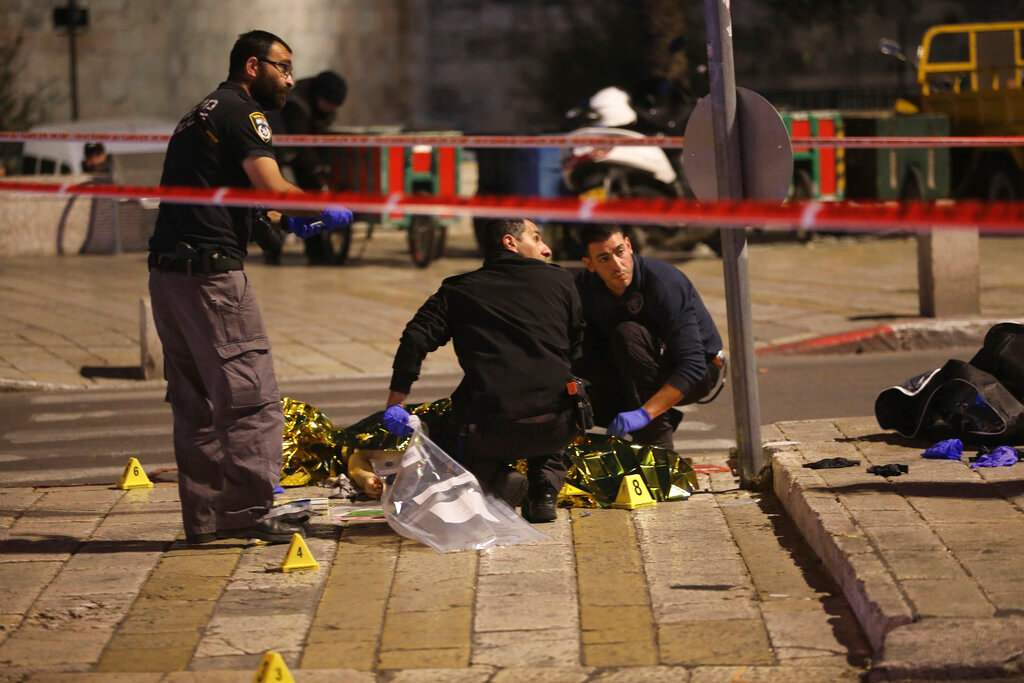 Israeli police examine the body of a man shot near Damascus Gate to the Old City of Jerusalem, Saturday, Dec. 4, 2021. Israeli police shot a Palestinian on Saturday after an ultra-Orthodox Jewish man was stabbed and wounded near Damascus Gate in Jerusalem's Old City, a crowded area that is often the scene of demonstrations and clashes.(AP Photo/Mahmoud Illean)
Mahmoud Illean
Posted Saturday, December 4, 2021 11:15 am

JERUSALEM (AP) — Israeli police shot a suspected Palestinian attacker after an ultra-Orthodox Jewish man was stabbed and wounded Saturday near Damascus Gate just outside Jerusalem's Old City, a crowded area that is often the scene of demonstrations and clashes.

The Magen David Adom emergency service said it treated an ultra-Orthodox man in his 20s who was stabbed in the area, saying he was in moderate to severe condition. It said the attacker “was shot down.”

Israeli police said they “neutralized” the attacker, and did not immediately respond to a request for clarification.

Video circulated online appeared to show an Israeli Border Police officer shooting a Palestinian man who was lying on the ground. Another video appeared to show police with guns drawn keeping medics from reaching the man. The videos appeared authentic.

Hamas, the militant Islamic group ruling the Gaza Strip, said the youth was an attacker and praised the attack as a “new heroism,” but stopped short of claiming responsibility for it.

Damascus Gate was the epicenter of protests and clashes between Palestinians and Israeli police last spring, during the Muslim holy month of Ramadan. The unrest spread to other parts of the city, including a nearby holy site sacred to Jews and Muslims, eventually helping to ignite the 11-day Gaza war.