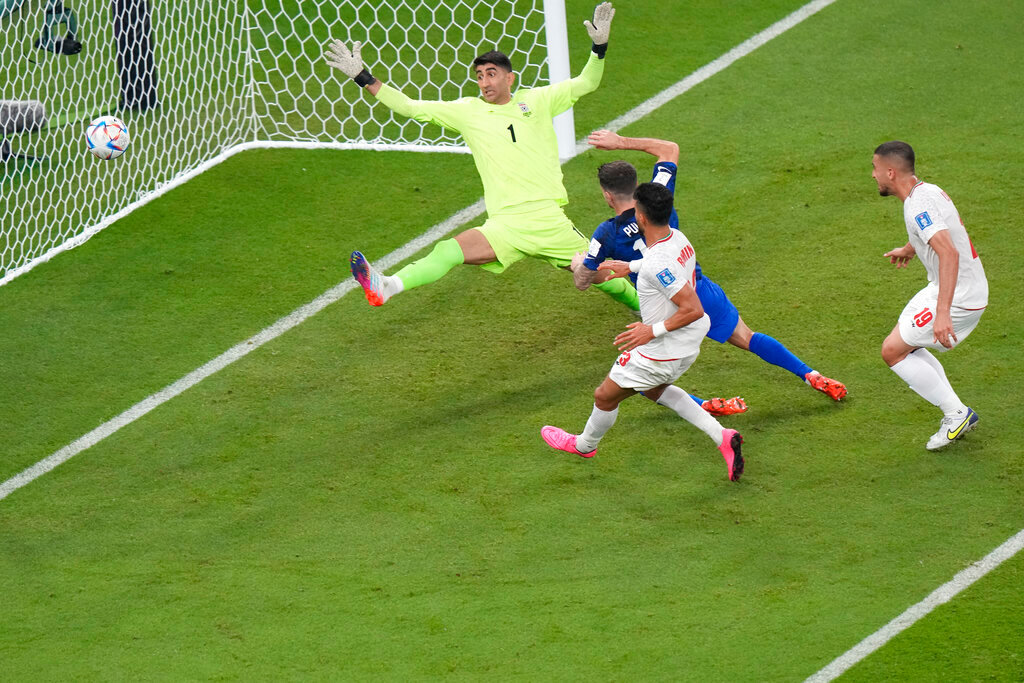 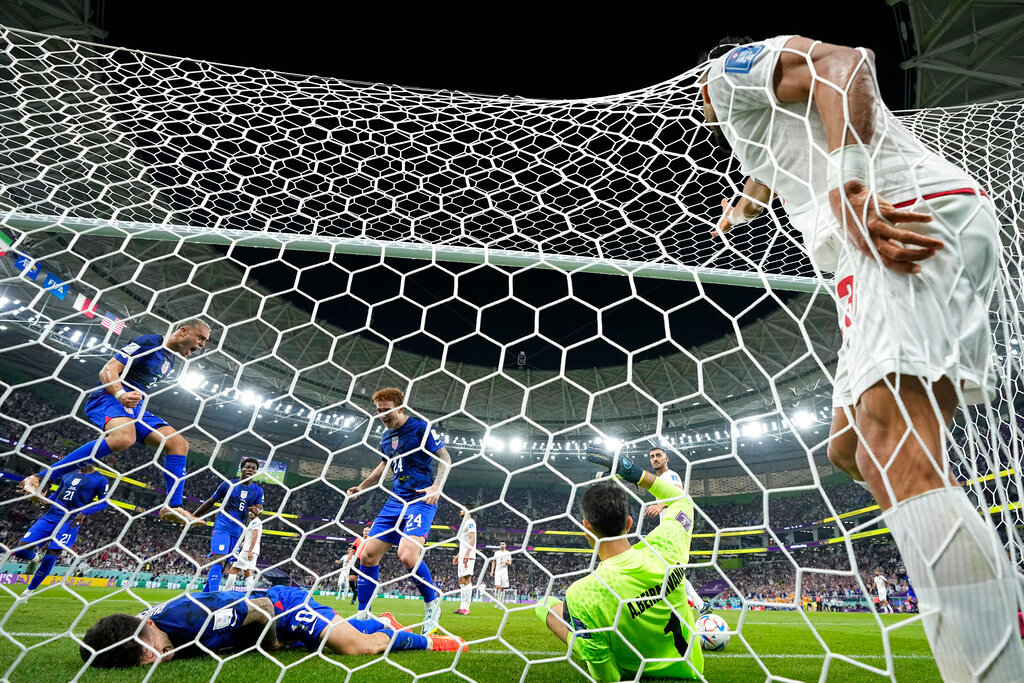 Christian Pulisic of the United States lies on the pitch after scoring, as teammates Sergino Dest, left, and Josh Sargent celebrate during their World Cup group B match against Iran in Doha, Qatar, Tuesday, Nov. 29, 2022. (AP Photo/Manu Fernandez)
Manu Fernandez 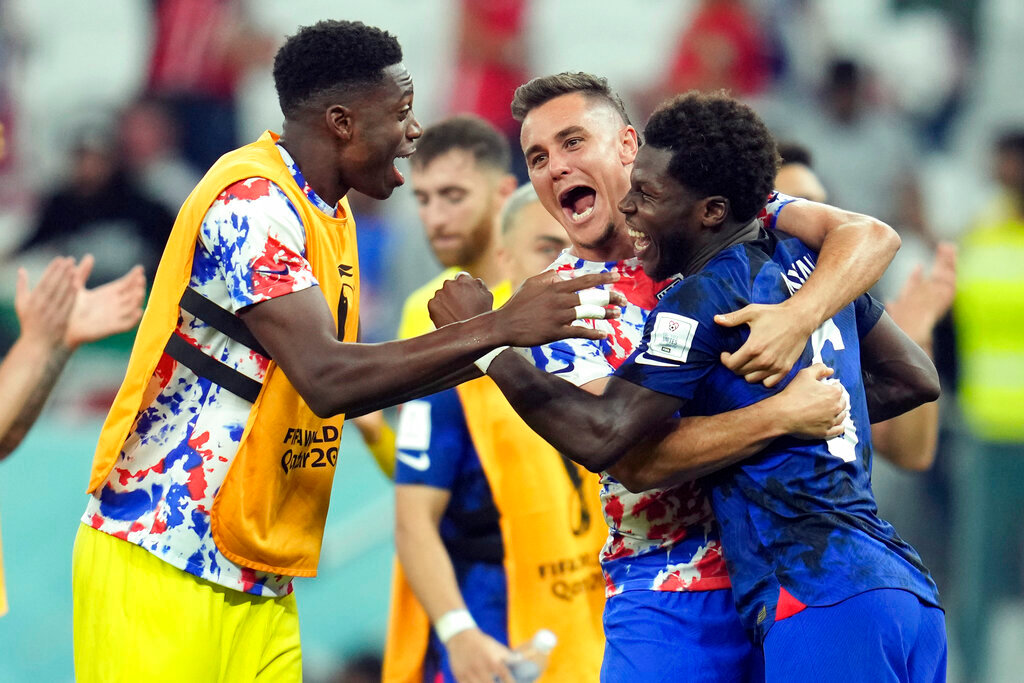 DOHA, Qatar (AP) — Christian Pulisic scored while crashing headfirst into the goalkeeper in the 38th minute and the United States advanced to the knockout round of the World Cup with a 1-0 win over Iran on Tuesday in a politically charged rematch of their famous meeting a quarter-century ago.

Pulisic sprawled on the field and was lying in the goal for about three minutes as he received treatment from the U.S. staff. He re-entered the game but was replaced at the start of the second half.

Back in the World Cup after missing the 2018 tournament, the U.S. opened with draws against Wales and England and needed a victory to move on to the round of 16.

The Americans finished second in Group B with five points, two behind England, and will play the Netherlands on Saturday with the chance to reach the quarterfinals for the first time since 2002.

“I always say it’s us against the world,” forward Tim Weah said. “No one believed the U.S. could play good football.”

Iran finished third with three points. The team has failed to advance in all six of its World Cup appearances.

There was heightened tension surrounding the match because of the strained relations between the United States and Iran’s Islamic government. Iran had famously upset the U.S. 2-1 in the 1998 tournament in France, eliminating the Americans.

Pregame protocols were normal, unlike the 1998 game, when Iranians presented the Americans with white flowers and the teams posed for a joint photo.

Raucous Iranian fans with horns and drums in the crowd of 42,127 filled the lower bowl behind one goal at Al Thumama Stadium and were far louder than the red-white-and-blue U.S. supporters at the other end and behind the American bench.

The U.S. outshot Iran 9-0 in the first half but didn’t break through until Pulisic came up with the big moment that a growing and increasingly demanding fan base back home had been pining for.

Weston McKennie lofted a pass from just past the center circle to Sergiño Dest at the edge of the 6-yard box. Dest headed the ball in front of the net on a bounce as Pulisic charged up the center of the field past Ramin Rezaeian and Majid Hosseiniand.

Turning his body to let the ball hit his right foot, Pulisic knocked the ball for his 22nd international goal and first in World Cup play. His momentum carried him into goalkeeper Alireza Beiranvand, and Pulisic needed to be helped to his feet before going back in.

“Obviously we’re very thankful that he threw his body there,” McKennie said. “At the end it was a heart-drop sinking moment, but we got it done and we’re excited to still be here.”

Weah, who scored the Americans’ goal in the opening 1-1 draw with Wales, nearly doubled the lead in the seventh minute of first-half stoppage time but was ruled offside.

Brenden Aaronson replaced Pulisic at the start of the second half.

With England ahead of Wales, Iran knew it needed only a draw to advance and finally got its first shot at goalkeeper Matt Turner when Saman Ghoddos put a header over the crossbar in the 52nd minute. Saeid Ezatolahi put an open shot high and wide in the 70th and Morteza Pouraliganji’s diving header in the third minute of nine minutes of stoppage time went just wide and Walker Zimmerman cleared a loose ball in front of the open net in the ninth minute after Cameron Carter-Vickers got a slight hand on Mehdi Taremi.

“I hope that our fans and our people in Iran forgive us. I am just sorry," Taremi said.