Idong Ekandem, a North American Mission Board missionary serving in Clarkston, taught how Georgia Baptists are working to share Christ with those who are resettled in the Atlanta suburb which is called the most diverse square mile in the nation. JOE WESTBURY/Index
Posted Monday, July 16, 2018 12:15 am
Joe Westbury

Idong Ekandem, a North American Mission Board missionary serving in Clarkston, taught how Georgia Baptists are working to share Christ with those who are resettled in the Atlanta suburb which is called the most diverse square mile in the nation. JOE WESTBURY/Index

CLAYTON — Girls spending a week at Camp Pinnacle this summer came one step closer to understanding the plight of the world’s refugees and … more importantly … the biblical admonition to minister to them regardless of political posturing.

Refugees worldwide have become pawns among regimes that view refugees as those to be ministered to or those to be blamed for their economic problems. The reality is the planet is experiencing one of its largest mass migrations in history across all continents and solutions remain evasive.

However, the campers left with a fresh appreciation for the plight of those who leave their homes to avoid persecution or economic hardship – including death or starvation – and are forced to throw themselves on the mercy of strangers.

Idong Ekandem, a North American Mission Board missionary serving in Clarkston, told how Georgia Baptists are working to share Christ with those who are resettled in the Atlanta suburb which is called the most diverse square mile in the nation. Buddy and Nancy Brock, retired from the International Mission Board who served in Central Asia, shared their experiences from the other side of the world. 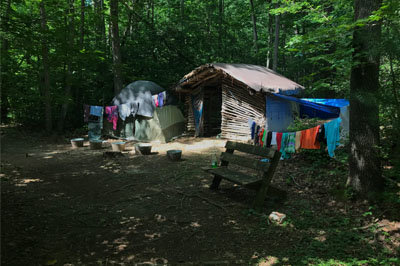 In the Pinnacle woods, girls experienced a refugee "camp" and, through role playing, learned how hard it would be to pack a suitcase in a matter of minutes with life's barest belongings and to flee for their life. JOE WESTBURY/Index

The girls learned that life in refugee camps is no picnic. They were taught that the average stay in that setting averages 15 to 17 years before a family is resettled. That means for many children their age, their entire childhood memory is that of living in tents without water or electricity or minimal education … waiting for acceptance into another nation.

Only a few are fortunate to eventually be resettled in places like Georgia or Texas, and even then, many are treated with disdain. But they find acceptance through Christian agencies such as NAMB and other denominations who help resettle their families, provide job training, English as a Second Language classes, and an opportunity to hear the gospel for the first time.

The girls were taught to identify with others their ages and to see the world through their eyes. They learned about what they have in common … yet how different their lives really are. For example, one response was “I am a kid, but I do not have to work to help feed my family.” Other was “I like to learn but there is no room in the school for me.”

For their mission project, campers also brought back to school supplies to fill backpacks being collected by Clarkston International Bible Church. 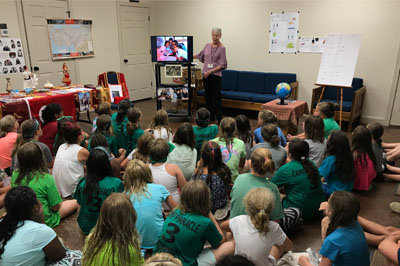 Retired Central Asia missionaries Nancy Brock, with husband Buddy (not pictured), shared their experiences from the other side of the world. JOE WESTBURY/Index

This year’s theme brought a biblical worldview to 639 girls from kindergarten/age 5 through those is the 12thgrade, said Camp Director Tabitha Ferrell. A total of 27 staffers, many of them former campers themselves, guided them in Bible studies, nature hikes, and for the adventurous the 90-minute one-way hike to the breathtaking summit of Mount Pinnacle.

During an after lunch Bible study in the shade of trees overlooking the camp lake, staffer Morgan Benefield teaches the story of Jesus and the fish nets and the Sea of Galilee. As the story ends she asks the campers what they learned from the teaching of Jesus.

“Even when you are doubtful you need to trust Jesus,” one camper replies with raised hand.

When asked who they know who need to hear about Jesus, several others raise their hands.

“My sister and her baby.” 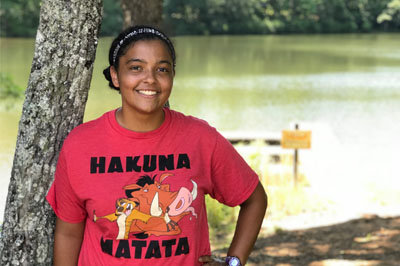 Keyanna Imgrund, who served as a camp staffer this summer, said "missions has always been a big part of my life." JOE WESTBURY/Index

One after the other the girls raise their hands in what become prayer requests for loved ones.

Benefield is one of those previous campers who has returned to “pay back” the Pinnacle blessings in her life. She spent 8 years as a camper and the past 2 on the staff, serving as counselor and spiritual guide for her wards.

“This is such a missions-focused experience. It is amazing how you come to this little place in the mountains and learn about how God is working in missions all around the world.

Not only did I accept Christ here but a few years later received my call to international missions on a February retreat. It happened right over there in the chapel where I was also saved."

She is the only believer in her family and is grateful she was brought to Pinnacle by the GAs leader at the church she was attending. Today she serves on the leadership staff at the University of North Georgia BCM. 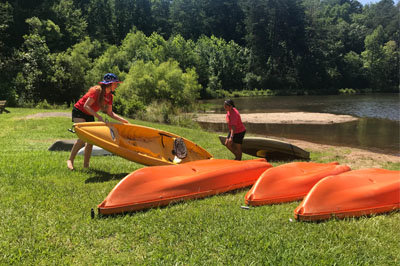 Elizabeth Glass, left, and Keyanna Imgrund pull kayaks out of the lake to dry in the summer sun. Campers enjoy paddling around the lake in their free time. JOE WESTBURY/Index

Elizabeth Glass takes a minute to rest after pulling kayaks out of the lake with fellow staffer Keyanna Imgrund. The morning free time is over and the lake surface settles into a natural calm after being beaten by numerous paddles with campers with energy to spare.

Glass is a Georgia Tech sophomore who hails from Sherwood Baptist Church in Albany. This is her first year on staff after a decade as a camper.

It doesn’t take long for her to think through why she is giving this summer to Camp Pinnacle.

“I wanted to give back to the next generation what had been poured into me through all those years. Camp Pinnacle has played a huge role in developing my relationship with Jesus, and I will be forever grateful for that. It was in the Vespers Garden that Jesus called me to be His Friend and follow him.

“I was already saved but that was a moment of spiritual renewal for me … a realization of how much I needed to be totally surrendered to Him and not just see my faith as a weekend experience.” 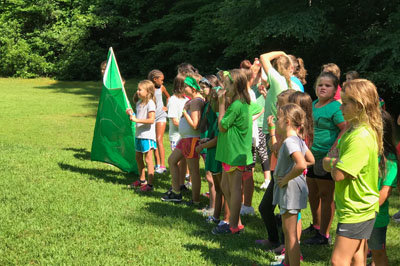 Campers enjoy a variety of activities when they are not participating in Bible studies or learning about missions. JOE WESTBURY/Index

Campers like Vanessa Ventura from Thomaston benefit from the week by learning from Southern Baptist missionaries who tell of their lives far from family and friends but who are responding to God's call on their lives. Campers learn that missionaries are flesh-and-blood people just like themselves who took the time to be quiet and listen to God's still, small voice.