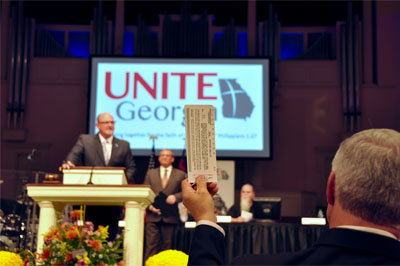 One of the 1,083 messengers raises a ballot to vote during the convention annual session. JOE WESTBURY/Index
Posted Friday, September 29, 2017 4:39 pm
The Christian Index

The 196th Annual Meeting of the Executive Committee to the Georgia Baptist Convention will be held at North Metro First Baptist Church, 1026 Old Peachtree Road, NE, Lawrenceville, GA 30043 on November 13-14, 2017.  The office of Dr. John Bryan will accept resolutions for the 2017 annual convention until November 7, 2017. Please mail them to the address below or send via e-mail to jbryan@gabaptist.org  and copy to pcollins@gabaptist.org .