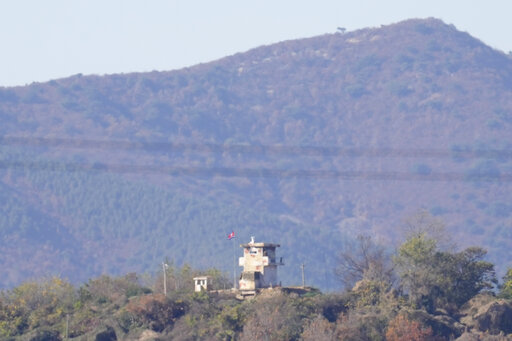 A North Korean soldier stands at a military guard post as a North Korean flag flutters, seen from in Paju, South Korea, Friday, Nov. 4, 2022. North Korea fired at least six missiles into the sea on Thursday, including an intercontinental ballistic missile that triggered evacuation warnings and halted trains in northern Japan, adding to a recent barrage of weapons tests that has escalated tensions in the region. (AP Photo/Lee Jin-man)
Posted Friday, November 4, 2022 8:54 am
By KIM TONG-HYUNG, Associated Press

North Korea’s aerial exercises on Friday came after the North test-fired around 30 ballistic missiles during the two previous days, including an intercontinental ballistic missile on Thursday that triggered evacuation warnings in Japan, in an angry response to U.S.-South Korea joint air force drills involving hundreds of their warplanes.

South Korea’s Joint Chiefs of Staff said the North Korean warplanes were detected in various areas inland and along the country’s eastern and western coasts, but they did not come particularly close to the inter-Korean border.

None of those planes breached the South Korean military’s virtual “tactical action” line, which is designated 20 to 50 kilometers (12 to 31 miles) north of the Koreas’ land and sea boundaries for monitoring purposes to give the South enough time to respond to provocations or attacks.

The South still scrambled 80 of its own warplanes, including an unspecified number of F35 fighters, but there weren’t any immediate reports of clashes.

U.S. and South Korean forces were also separately conducting their “Vigilant Storm” combined aerial exercise, which involved some 240 warplanes, including F35s. The training had been scheduled through Friday, but the allies extended it to Saturday in response to North Korea’s intensified testing activity this week.

The extension of the drills was announced on Thursday after the North test-fired an ICBM, which triggered evacuation alerts in northern Japan, and followed the event with two short-range ballistic missile launches into sea.

A senior North Korean military official issued a statement threatening retaliation over the extension of the drills, and the North about an hour later fired three additional missiles into the sea.

On Wednesday, North Korea fired more than 20 missiles, the most it has launched in a single day.

After already setting an annual record with dozens of ballistic missile launches in 2022, North Korea has further dialed up its testing activity since late September, including what it described as simulated nuclear attacks on South Korean and U.S. targets. It has said its tests are meant as a warning against the United States’ military drills with allies South Korea and Japan which it portrays as rehearsals for a potential invasion.

Experts say North Korea is escalating brinkmanship aimed at forcing the United States to accept it as a nuclear power and at negotiating economic and security concessions from a position of strength.