SBC allocates $500,000 for investigation into handling of sex abuse allegations 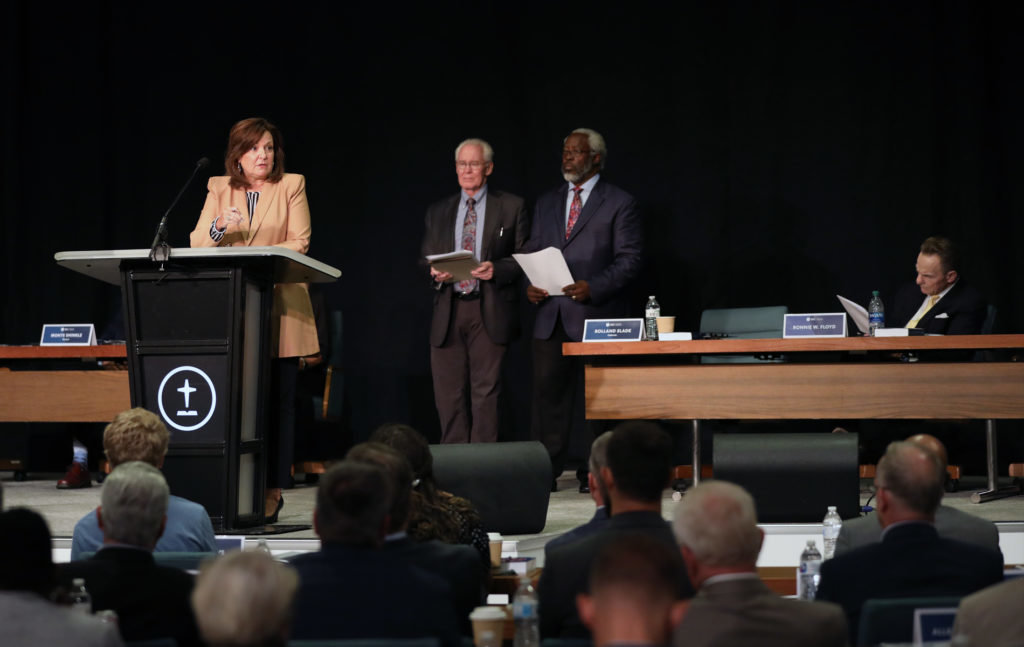 Robyn Hari, chair of the Executive Committee’s Finance and Stewardship Development Committee, speaks during a meeting on Tuesday in Nashville.

Among the actions taken were the approval of the EC’s 2021-2022 operating budget and approving a preliminary financial allocation for the EC’s legal services connected to the upcoming investigation of the Sexual Abuse Task Force established by the messengers at the 2021 SBC Annual Meeting.

The Committee on Convention Finances and Stewardship

The Committee on Convention Finances and Stewardship, chaired by Robyn Hari (Tennessee) recommended an $8.6 million 2021-2022 operating budget for the Executive Committee. The recommendation was approved by the full committee in the morning session.

The committee also recommended an allocation of an initial $500,000 for the EC’s legal fees related to the independent investigation by the Guidepost Solutions, the company retained by the Sex Abuse Task Force to conduct the review. The motion stipulated that the EC must be notified when half of the funds have been expended. The recommendation was approved by the full committee in the morning session.

Rob Collingsworth, 2021 SBC messenger from Texas, joined the committee to speak to a motion to request SBC entities examine the use of non-disclosure agreements. The committee voted to explore potential processes for the examination and report on it at the next full board meeting in February 2022.

The committee did not act on a motion to require a review of audited financials every five years, citing Article XIII of the SBC Business and Financial Plan which already requires each entity to conduct an independent audit every year and provide the report in the Book of Reports which is presented at the annual meeting.

The Committee on Convention Missions and Ministry

The Committee on Convention Missions and Ministry, led by Rob Showers (Virginia) took up three items, but acted on only one.

Messengers to the annual meeting asked the Executive Committee to study conflicts of interest in relation to the role of the Convention’s legal counsel, Guenther, Price & Jordan. The committee decided to contact an independent firm, Friday, Eldridge & Clark, with knowledge of Southern Baptist polity and experience in non-profit case law to conduct the review.

The committee also heard information – but took no action – on motions related to the Resolutions Committee and referring to the SBC as the Great Commission Baptist Convention.

The Committee on Convention Events and Strategic Planning

The Committee on Convention Events and Strategic Planning, chaired by Erik Cummings (Florida), considered two referrals from messengers to the annual meeting. The first was a request to make Nashville the permanent site of the annual meeting.

The committee decided not to take action on the request, but said it “will continue the concentrated effort to choose locations that will allow Southern Baptists from across the country to participate in the Annual Meeting.”

The group also considered a request to allow IMB missionaries to vote by proxy at the annual meeting. The committee cited several logistical and polity hurdles that prevented it from moving forward with the request.

Among them were “there being no known model for web-based constituent participation in any similarly sized, deliberative body, nor even in any state Baptist convention,” as well as it being “an inappropriate prioritization to divert missions offerings to fund and undertake the study and implementation of such technology.”

The Committee on Southern Baptist Relations

The Committee on Southern Baptist Relations, led by Jim Gregory (Idaho) moved to consider developing nominating speech guidelines for those nominating some for SBC officer posts. The group added the item to its February 2022 meeting for consideration.

The committee considered requiring the inclusion of Cooperative Program information in nomination speeches, but declined to do so. However, it did affirm that baptisms and Cooperative Program giving by the churches of announced candidates “will continue to be provided prior to each annual meeting through Baptist Press.”

The group also declined requests to add a Fellowship Meal Sunday and Sunday of Repentance to the SBC annual calendar.