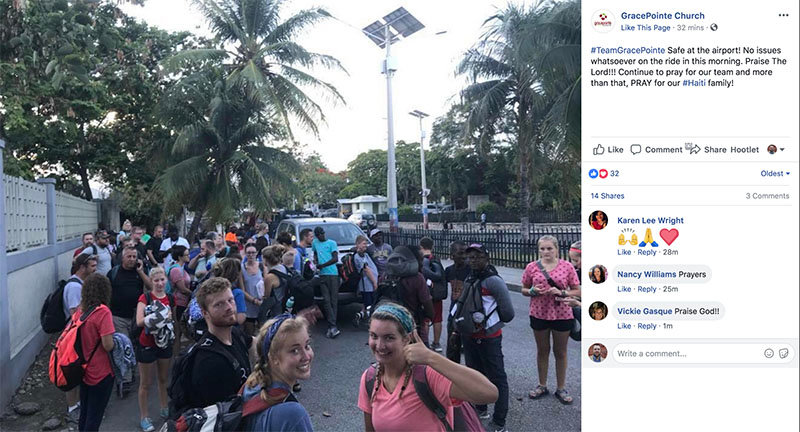 Family and friends give their prayers on GracePointe Church's Facebook page after the announcement of the group's leaving Haiti for Georgia is posted. GRACEPOINTE/Facebook

UPDATE: The team landed in Ft. Lauderdale around 12:30 p.m. and are making their way back home.

DOUGLAS — GracePoint Church in Douglas confirmed on its Facebook page this morning that its 36-member team had arrived at the airport in Port-au-Prince, Haiti and would be returning soon after departure delays caused by civil unrest.

The group from Douglas joined other Southern Baptists and mission groups caught amid protests due to fuel price increases that made travel unsafe. Like a team from Mt. Olivet Baptist Church in Hartwell, the group from GracePointe were originally scheduled to leave Saturday after a week of ministering among orphans, extending evangelism, and providing medical care.

“They’re doing well," Senior Pastor Chris Watson told Baptist Press. “"They are in the city of Léogâne, which is about an hour away from Port-au-Prince. …They have been in good spirits and have had adequate resources."

Other Southern Baptist churches with teams in the country include The Woodland Community Church in Bradenton, Fla.; The Glade Church in Mt. Juliet, Tenn.; First Baptist in Russellville, Ala.; and Istrouma Baptist Church in Baton Rouge, La.

"We were packing our bags Friday night when we learned we wouldn't be flying out the next morning," team leader Archie Rish, the church's discipleship pastor, told The Index over the phone from the Toussaint Louverture International Airport in Port-au-Prince. "There were mixed emotions, but we knew we were safe. Fear never overtook anyone in our group." 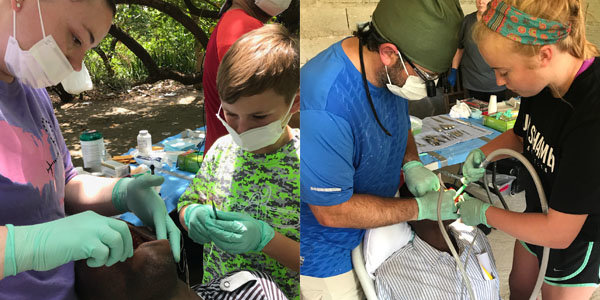 From that point, the team remained on the grounds at their complex in Léogâne. The unexpected delay, Rish emphasized, didn't diminish the group's focus.

The GracePointe team had been working with Baptists 4 Haiti, which came together as a long-term response to Georgia Baptist Disaster Relief work in the nation following a devastating 2010 earthquake that claimed 100,000-160,000 lives. Since arriving June 30, the group conducted dental clinics both inside buildings our outside under trees.

"This was the culmination of a three-year process of our team providing dental care for nine churches," said Rish. "We gave everything from hygiene tips to tooth extraction to fillings."

In addition, they conducted a Vacation Bible School for an orphanage and built a kitchen for a pastor and his wife. The kitchen, constructed onto the couple's house near the church and a school, would in effect serve as a community kitchen.

"There were so many mixed emotions on this trip," Rish testified as his group prepared to board a plane. "God has given us a love for the Haitian people and there was never a time we felt He'd left us.

"His promises remain true. During the time we were at our place, the team continued to witness and love on the staff staying with us. Our hearts break for the people of Haiti. They're so beautiful and we knew that if our safety had been in danger they would have taken us into their own homes."

They didn't arrive with the team, but Roland and Mary Norris joined the group this morning. Living in the country for the past six-and-a-half years, Roland Norris felt the unrest was fueled not only by rising gas prices but a World Cup elimination by the Brazilian soccer team, a favorite among Haitians.

"Those two events really sparked things," he said, "but not all citizens were protesting. My understanding is there is political opposition to the president and that opposition saw an opportunity [to create discord].

The Norrises began Baptists 4 Haiti as members of First Baptist Church in St. Marys in January 2012. 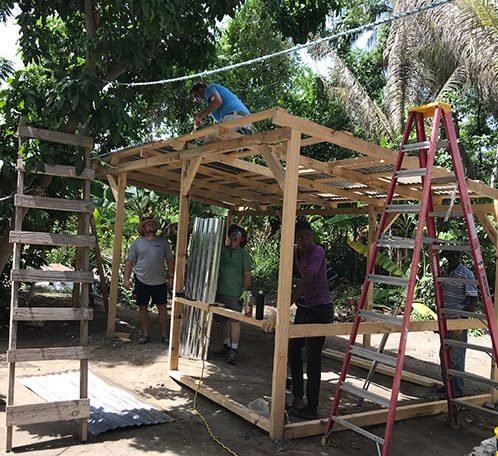 Members of GracePointe Church help build a kitchen. The group partnered with Baptists 4 Haiti, a ministry that grew out of the desire for a long-term Georgia Baptist presence in the country following Disaster Relief work after the 2010 earthquake that devastated the country. ARCHIE RISH/Special

"After Georgia Baptist Disaster Relief teams helped in the immediate needs following the 2010 earthquake, I prayed with my pastor, Steve Kegley, about establishing a long-term effort to the country," Norris said over Rish's phone. " Stuart Lang and Dr. [J. Robert] White had been praying for a church to step up and keep the ministry going. So, I called people to create a board of directors and collectively Georgia Baptist churches gave $1.6 million to start the ministry."

"Since the work started with Georgia Baptist Disaster Relief through now, we have nine churches growing with their physical presence and spiritual awareness. Leadership from the Georgia Baptist Mission Board have come and trained pastors.

"Those pastors are very grateful for what Georgia Baptists have started."