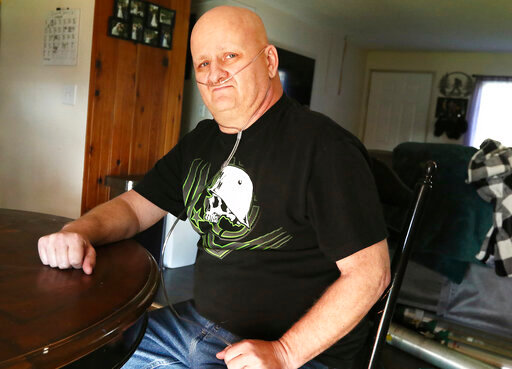 MYRTLE CREEK, Ore. (AP) — Howard Breidenbach thought it was all a big conspiracy.

The government using a so-called “coronavirus” to control the people. Feeding drama. Making up numbers.

Until he forgot his own name.

The 47-year-old independent trucker from Myrtle Creek thumbed his nose at COVID-19. On July 14, something was wrong.

“We thought for sure it was pneumonia,” Breidenbach’s wife of 29 years, Tonja, said Monday. “I didn’t feel very good either. When he got sick, I started feeling sick, too.”

Howard’s condition took a drastic turn. After spending a few days at CHI Mercy Medical Center, he was transferred to the intensive care unit, but there was only so much hospital staff could do for him. He needed specialized help, and he needed it fast.

One doctor called every hospital in the Pacific Northwest trying to find an extracorporeal membrane oxygenation machine — better known as ECMO — to help serve as an artificial lung for the 47-year-old, whose condition was continuing to deteriorate.

“That was very traumatic, very upsetting,” Tonja said of the phone call she received in late July. “He might actually die.”

No such machines were available in Oregon, but the doctor at Mercy was able to locate one in Seattle at the University of Washington Medical Center’s Montlake facility. Howard, in a medically induced coma, was transported to Roseburg Regional Airport and flown to Seattle.

“I had no idea,” Howard said of the transfer. “I went to sleep in Roseburg and woke up in Seattle.”

For nearly 100 days, Howard was receiving a medical treatment that temporarily draws blood from the body, provides artificial oxygenation of the blood and returns it to the cardiovascular system.

On average, the survival rate of patients on such a treatment is estimated at 30%.

Quite simply, it was Howard’s last chance.

Meanwhile, his wife was in quarantine in Myrtle Creek until Aug. 16, at which time she could travel to Seattle to try and see her husband.

“It was horrible to see him like that,” Tonja said. “His chest wasn’t moving, he had a tube down his throat. They said it was very important to talk to him and he was trying to communicate back, but it was awful.

“They could wake him up, but it was more of a surface awakening to make sure he still had brain activity,” she said.

Howard and Tonja Breidenbach had big plans. They were in the process of launching their own trucking company with the goal of retiring within the next five to seven years. They had already bought the truck to get their dream off the ground and were eyeing more equipment. Now, the couple who had met in Heppner in 1990 was praying for the simple gift of another day together.

“I spent a lot of time on my knees praying,” Tonja said. “You sure find out what’s important.”

Hooty B LLC, the Breidenbach’s trucking company, is on permanent hold. The truck has been sold, as well as the couple’s home, a sale which was finalized by a “thumbs-up” from Howard via video call.

Howard Breidenbach is now recuperating at his Myrtle Creek home with help from his wife Tonja Breidenbach.

During his 102 days in the hospital, Howard missed his 29th wedding anniversary. He was discharged from the hospital on Oct. 27 and had his 48th birthday on Nov. 11.

He credits pulmonary specialist Dr. Luana Petre Nedita for helping save his life.

“I owe her everything, and I want her to know it,” Howard said.

Following Howard’s ordeal, he and Tonja both agreed to get the COVID-19 vaccine.

“My idea was that we all get the shot and all die of cancer 10 years later,” Howard said. “I was wrong, and now I’ve got myself to blame and am reaping my rewards.

“I’m 48 years old and have to have somebody take care of me. Every mental image you hold of yourself is lost.

“I kept having this dream we were at the coast, and it was so real. The picture we took, it wasn’t there. I just kept waking up in the same nightmare,” he said.

Today, both Howard and Tonja are encouraging those who are on the fence to vaccinate or not vaccinate to get the shot.