Mount Pisgah Baptist Church in Chatsworth is turning heads from North Georgia residents with its fully submersible submarine. The water-going craft has been on loan to nearly a dozen churches to build visibility of their Vacation Bible School events. MOUNT PISGAH/Special

CHATSWORTH — Chris Ray was ready for just about anything as a young pastor when he accepted his first church five years ago in this North Georgia town.

Of course, he had heard stories of how deacons could be rather “free” with their opinions when it came to giving advice. But he was not prepared for the creative juices that would flow from the minds of the deacons at small Mount Pisgah Baptist Church.

In his second year Lifeway announced that its Vacation Bible School product would have an aviation theme. 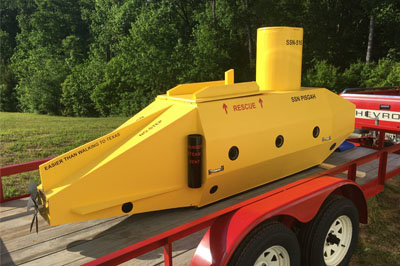 The submarine makes guest appearances around North Georgia on its own trailer. MOUNT PISGAH/Special

“Within days I got a call from deacon and retired naval officer Kevin Henry who told me, matter-of-factly, that he was going to build an airplane for our program. I thought that was rather odd but I said ‘OK’ and wondered just what he planned to do,” Ray says.

It turned out that Henry was true to his word and built a small airplane that children could sit in and would generate excitement about that year’s Vacation Bible School.

OK, Ray thought, that is nice but that’s about as far as this venture will go. But he was wrong. 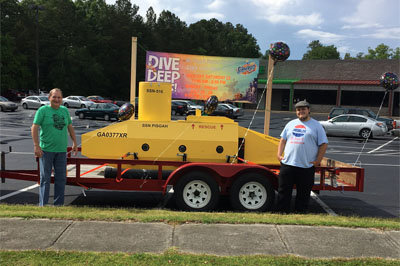 Deacon Steve Phillips, left, and Matthew Henry, right, have displayed the submarine at local businesses who not only benefit from the oddity but allow the church to promote Vacation Bible School as well. Henry is son of sub builder and retired naval officer Kevin Henry. MOUNT PISGAH/Special

From airplane to submarine

Last year when Lifeway announced its “submerged” theme playing off the idea of submarines, Henry contacted Ray again and said he planned to build a submarine.

“This time he really took me off guard because he mentioned that, unlike the unpowered airplane, the submarine would hold four people. And come with its own small nuclear reactor. And be able to dive and re-emerge from the murky depths of a local lake or pond,” Ray continues.

True to his word, Henry – with the help of other deacons and laymen in the church – built a 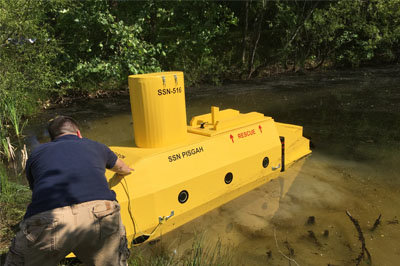 Church member Brad Gladson gently edges the submarine into a pond on his property near Chatsworth for its initial launch. MOUNT PISGAH/Special

real submarine that is taking sister Baptist churches by storm as they share  the submersible to promote their own VBS week.

Throughout the summer the yellow submarine has drawn crowds at restaurants and grocery store parking lots as well as nearly a dozen churches when it pulls up on its own trailer. At 4-feet wide and 15-feet long, the object is not easy to miss.

At this point the submarine does not have power to propel it through the water but it does have propeller blades in place, possibly hinting that Henry will add a motor after its summer tour and when he takes possession of it once again. 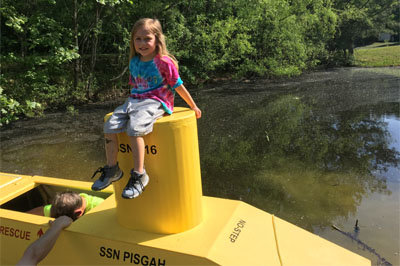 Channing Gladson, daughter of Brad Gladson who owns the pond where the submarine is being tested, sits atop the hatch while Steve Phillips, in green shirt, checks out the interior. MOUNT PISGAH/Special

“Our people are very generous with their time to help with the construction and a few donors provided all the funds at no expense to the church,” Ray says.

Submersible comes with its own nuclear reactor

Henry, the genius behind the project, knows a thing or two about watercraft, having served most of his life on the ocean and, prior to retirement, service in the Gulf War. And he has seen to it that the submarine and its nuclear component – about the size of a small microwave oven – is fully approved by the U.S. Coard Guard. 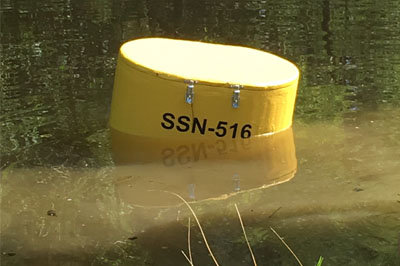 Showing its full functionality to submerge and return to the surface, the four-man submarine slips beneath the surface. At this point it is going ... MOUNT PISGAH/Special

Regardless of where it appears children are allowed to go inside and peer out through the portholes and have their photos taken.

“In addition to building visibility for our church’s Vacation Bible School, it helps us build goodwill in our communities. People see that our churches are united and are not fighting each other and we want to be a part of their lives,” Ray adds.

Mount Pisgah Baptist Church will not begin their Vacation Bible School until this Saturday (July 23) when it sponsors its kick-off with a block party from 11 a.m. to 2 p.m. The 4-hour event, which includes free lunch, will also serve as an opportunity for parents to pre-register their children for the event that begins Sunday evening. 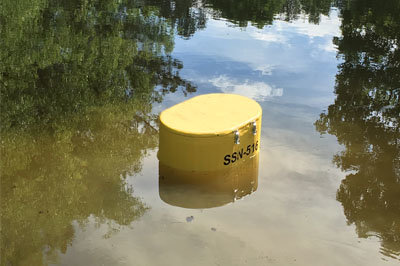 But even though this year’s event is still days away, Henry is not letting any grass grow under his feet.

“I already received a text from Kevin who saw the announcement of Lifeway’s 2017 focus on outer space with its “Galactic Starveyors” theme.

“I have no idea what he’s going to do but I’m leaving all the details up to him. Maybe he will build a spaceship.” 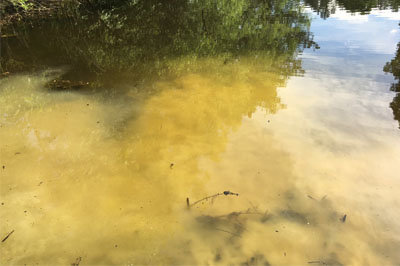 Mount Pisgah Baptist Church is a member of North Georgia/Murray County Baptist Association, which has its office in Dalton. Bob Bagley is director of missions. The church averages between 80 and 90 in Sunday morning attendance with about 100 enrolled in VBS. Its launch and pre-registration will be held this Saturday, July 23 (see story) and will hold classes July 24-29. The church is located at 2309 Old Highway 411 in Chatsworth. The Mount Pisgah website, with more information on VBS, is located at www.mtpisgahchatsworth.org. Chris Ray is pastor.

Deacon Steve Phillips, left, and Matthew Henry, right, have displayed the submarine at local businesses who not only benefit from the oddity but allow the church to promote Vacation Bible School as well. Henry is son of sub builder and retired naval officer Kevin Henry. MOUNT PISGAH/Special