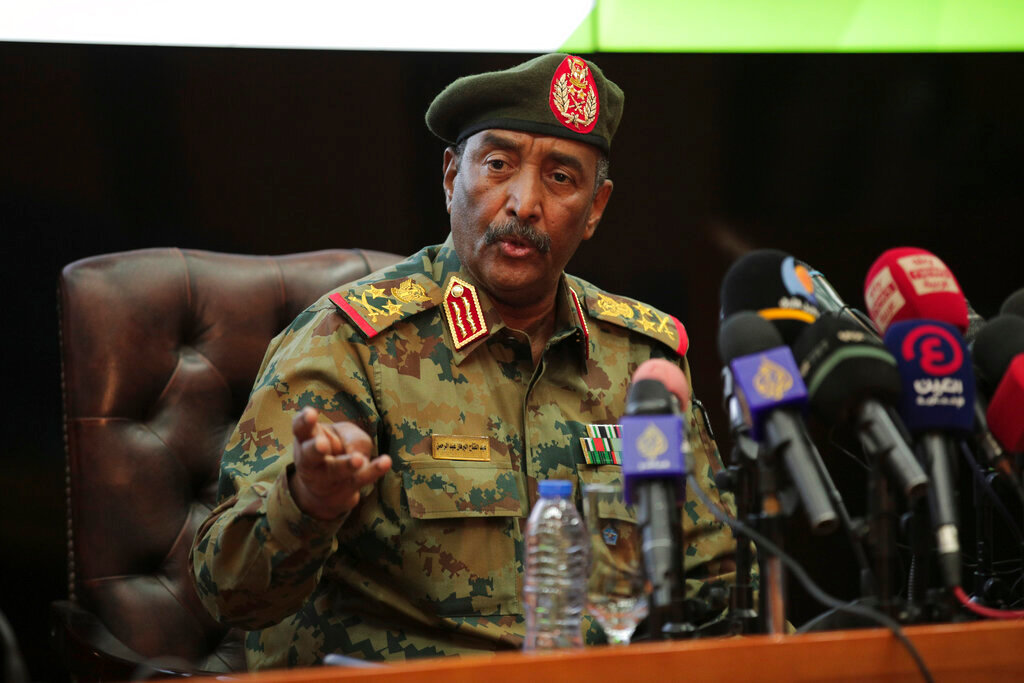 Sudan's head of the military, Gen. Abdel-Fattah Burhan, speaks during a press conference at the General Command of the Armed Forces in Khartoum, Sudan, Tuesday, Oct. 26, 2021. The U.N.’s top human rights body is holding an urgent session about Sudan on Friday, Nov. 5, 2021, after a military coup there nearly two weeks ago, with Britain, the United States, Germany and Norway leading a push to commission an expert to monitor the situation. The push for a human rights expert comes amid mounting pressure on Gen. Abdel-Fattah Burhan, and the forces loyal to him who dissolved Sudan’s transitional government and detained other government officials and political leaders in the Oct. 25 coup. (AP Photo/Marwan Ali, file)
Marwan Ali
Posted Thursday, November 11, 2021 12:22 pm
By FAY ABUELGASIM and NOHA ELHENNAWY, Associated Press

KHARTOUM, Sudan (AP) — Sudan’s top general has reappointed himself as head of the army-run interim governing body, a sign that he's tightening his grip on the country two weeks after he led a coup against civilian leaders.

There was no immediate reaction by pro-democracy groups to the move by Gen. Abdel-Fattah Burhan, which was announced by Sudan's state television.

The development comes amid repeated promises from the military that they will hand over power to civilian authorities. Since the Oct. 25 coup, more than 100 government officials and political leaders have been detained, along with a large number of protesters and activists. At least 14 anti-coup protesters have been killed due to excessive force used by the country’s security forces, according to Sudanese doctors and the United Nations.

Sudan has been in the midst of a fragile transition since a 2019 pro-democracy uprising led to the removal of longtime autocrat Omar al-Bashir. The 11-member Sovereign Council was first formed in the summer of 2019, after the military signed a power-sharing deal with pro-democracy forces.

A number of other members of the body have also sat on the previous council that Burhan headed before he dissolved it in last month’s coup. Also reappointed to the body Thursday was the powerful paramilitary leader Mohammed Hamdan Dagalo, as vice-president. Burhan also reappointed as council members another three generals who had served in the previous council, according to the state TV.

Eight civilians, including one from the previous council, were also appointed.

The agreement under which the council was formed after Bashir's ouster stipulated that the council should include five civilians chosen by activists, five military representatives chosen by the armed forces and one civilian member to be chosen in agreement between civilians and the generals.

The make-up of the new council falls short of the demands of key pro-democracy groups in the African county. The Forces for the Declaration of Freedom and Change, the main group that spearheaded the uprising that culminated in the overthrow of al-Bashir, has said that it will oppose the reappointment of Burhan to the top decision-making position.

Before the coup, the Sovereign Council held ultimate power while the government of the now deposed Prime Minister Abdalla Hamdok oversaw day-to-day matters. Since the coup, Hamdok has remained under house arrest in the capital, Khartoum, as Western powers and U.N. diplomats try to mediate a resolution to the crisis.

The coup in Sudan has been condemned by the United Nations, the United States and the European Union — all of which have urged the generals to restore a military-civilian transitional government. Mediation efforts are ongoing to resolve the crisis.

In the talks, the special representative urged for “a return to the transitional partnership” and appealed on the military “to exercise restraint and to take de-escalation measures, including freeing all those people who have been detained and the prime minister who remains under house detention,” said Dujarric.

According to a tweet by NetBlocks, the disruption is now in its eighteenth day and represents an “ongoing impediment” to democracy and human rights. A Sudanese court ruled on Wednesday, ordering the country’s three main telecommunications providers to restore internet access. However, authorities have not shown any sign yet of carrying out that order.