ATLANTA (BP) — About 150 volunteers from First Baptist Church in Atlanta packed 500 gift baskets on Jan. 30 that will be delivered to local children's hospitals as part of the Super Baskets of Hope initiative.

The project, sponsored by Basket of Hope, a charity based in St. Louis, Mo., enlists the help of current and former NFL players who deliver the gift baskets to children and their families. It Atlanta, the baskets are going to children at Egleston and Scottish Rite hospitals. 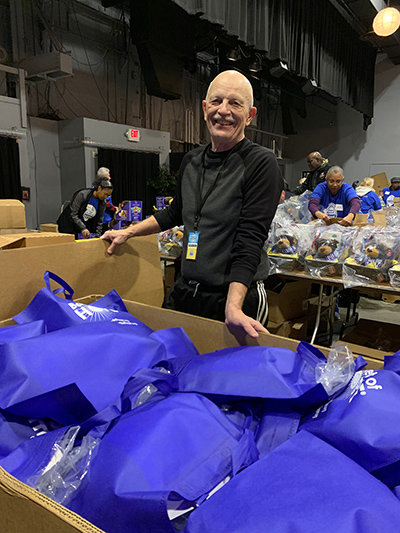 At First Baptist Church in Atlanta on Jan. 30, about 150 volunteers spent the day packing gift baskets that will be delivered to patients in two Atlanta children's hospitals. BASKET OF HOPE/Baptist Press

"We like Basket of Hope's philosophy, and we like what they were doing," said Mary Gellerstedt, director of global missions at Atlanta First Baptist Church. "Our folks enjoy doing something like this that's going to help somebody else."

Gellerstedt said when the church announced the project and asked for volunteers, they had responses from 150 people on the first day.

"It was a fun project, and everybody enjoyed it," she said. "It just worked out great."

Angela Brunette, the national executive director for Basket of Hope, began the organization in 1995 after her daughter Christina completed treatment for cancer. Christina was six when she was diagnosed with a tumor on her spine.

After treatment, the Brunettes were sometimes asked to return to the hospital to visit with and encourage current patients. After doing that for a while, Brunette realized they needed to start bringing gifts. That was the spark that began the Basket of Hope effort that has since grown into a national initiative providing gift baskets to thousands of hospitalized children.

The organization's Super Baskets of Hope project in conjunction with the Super Bowl began in Indianapolis in 2012. The NFL became involved in the organization in 1999 when former St. Louis Rams quarterback Kurt Warner and his wife Brenda delivered baskets to children in St. Louis. Warner introduced the program to former NFL coach Tony Dungy, who has since become the group's national spokesman.

Each year during the week preceding the Super Bowl, Super Baskets of Hope provides gift baskets to children in the Super Bowl host city. NFL alumni, players, coaches, mascots, and cheerleaders will participate in delivering the baskets to the two hospitals in Atlanta Jan. 31 and Feb. 1.

Brunette said she has encountered children who, years later, still remember the delivery and visit they received from an NFL player.

"When that player walks into their room, it's a lifelong memory," she said. "It just makes them feel like they're so special, that these players took time to come in and visit with them." 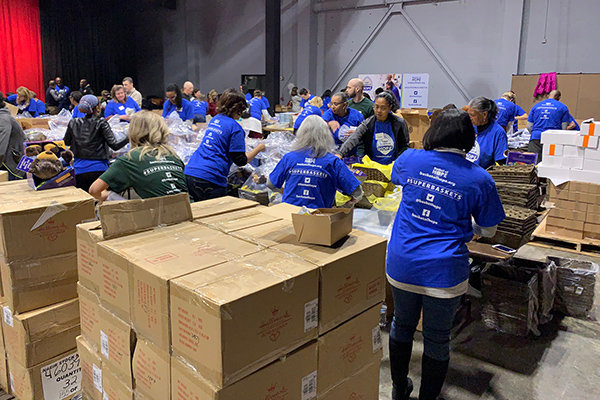 Volunteers at First Baptist Church in Atlanta packed 500 gift baskets for kids on Jan. 30, in addition to 500 tote bags for their parents. BASKET OF HOPE/Baptist Press

The gift baskets include toys, games, stuffed animals, puzzles, books, and other educational items. Super Baskets of Hope also provides tote bags for parents with snacks, a Bible, a journal, and a devotional book by Charles Stanley, pastor of Atlanta First Baptist Church.

This year's baskets also included a book by Lynda Young, "Hope for Families of Children in Hospitals," that Young wrote specifically for this year's Super Baskets of Hope project.

Young is a member of Annistown Road Baptist Church in Snellville, Ga. The book provides both information and inspiration, she said.

"Families feel so alone there and overwhelmed, no matter the situation," Young said. "You want them to have some helpful hints of what to do while you're there — making your hospital room home, how to deal with hospital staff."

The book also includes a section with Bible verses and quotes from different Christians, and at the end is the plan of salvation.

The gift basket concept is a simple one, Brunette said, but it's one that reminds children that they are loved by God and others, and that there's always hope, both now and eternally.