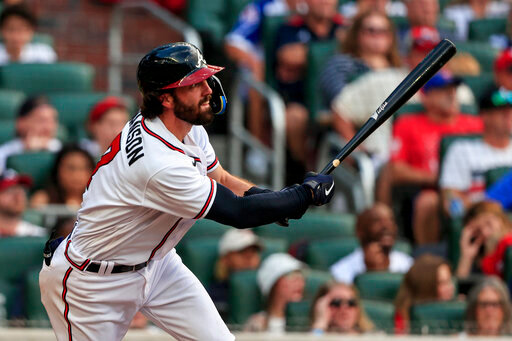 ATLANTA (AP) — Dansby Swanson hit a three-run double in a five-run second inning and the Atlanta Braves held off the St. Louis Cardinals 6-3 early Tuesday in a game delayed more than 2 1/2 hours by rain.

St. Louis loaded the bases for a couple of big hitters in the ninth, but Will Smith struck out Nolan Arenado and retired Albert Pujols on a grounder back to the mound for his fifth save.

Matt Olson had two RBI singles for the Braves, driving in Swanson both times.

There was a delay of 2 hours, 37 minutes, before the matchup of second-place teams resumed in the fifth inning at 11:29 p.m.

Smith, filling in for sidelined Braves closer Kenley Jansen, walked Austin Romine in the ninth and gave up a one-out single to Brendan Donovan before Paul Goldschmidt walked.

Following a mound visit from pitching coach Rick Kranitz, Smith fanned Arenado and got Pujols on a grounder.

Swanson's bases-loaded double was the big hit in the second against Dakota Hudson (6-5). Swanson also doubled and scored in the first.

The Braves remained 3 1/2 games behind the first-place New York Mets in the NL East. The Cardinals fell three games behind division-leading Milwaukee in the NL Central.

The long delay cost Braves right-hander Kyle Wright an opportunity for his 10th win. Wright allowed one unearned run on three hits in four innings. The Braves led 6-1 before the delay.

Atlanta right-hander Jesse Chavez (2-1) gave up homers to rookies Juan Yepez and Conner Capel in the sixth. Capel's homer to center field was the first of his career.

Swanson was hitting only .236 on May 23. Since then, he has the most hits in the majors while raising his batting average to .304. His 37 hits in June were the most by a Braves shortstop in a month since Omar Infante's 43 in August 2010.

The surge has come as Swanson is approaching possible free agency while being represented by the same Excel Sports Management, including agent Casey Close, used by former Braves first baseman Freddie Freeman.

Freeman signed with the Los Angeles Dodgers after he was unable to reach agreement on a deal with Atlanta.

Swanson, 28, hit only .248 but set career highs with 27 homers and 88 RBIs while helping Atlanta win the World Series last season.

After scoring one run in the first when Olson's single drove in Swanson, the Braves sent nine batters to the plate in the second. Ronald Acuña Jr. drove in a run with a bases-loaded walk after Hudson hit Harris with a pitch.

With three runners on the move on a full-count pitch, Swanson's double to left-center made it 5-0. Olson's second run-scoring single pushed it to 6-0.

Eddie Rosario, who had laser surgery to correct blurred vision and a swollen right retina, came off the injured list and had one hit while starting in left field for Atlanta.

Braves: OF Adam Duvall, hit by a pitch on his left hand Saturday in Cincinnati, was held out. “Still going to be a couple days before he can swing,” manager Brian Snitker said. ... RHP Mike Soroka threw live batting practice Saturday at the Braves' complex in North Port, Florida. Soroka, trying to return from his second Achilles tendon surgery, is moving closer to starting a minor league rehabilitation stint with the goal of returning in August.