"The Beginning of Baptist Ecclesiology" – a review 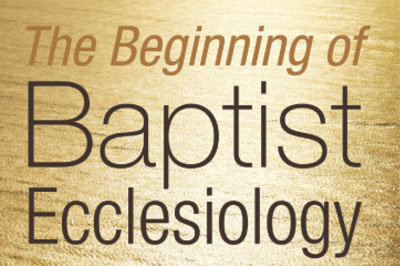 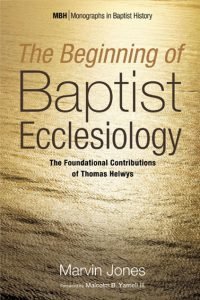 Marvin Jones, a former Georgia Baptist pastor and current professor of Theology at Louisiana College, has written a significant book entitled The Beginning of Baptist Ecclesiology: The Foundational Contributions of Thomas Helwys.

Helwys, born around 1550 and a contemporary of King James I, was raised in England on a Nottinghamshire estate and educated at the prestigious Gray’s Inn on the Westminster side of London. Helwys, his wife Joan, and their seven children were involved in the Puritan community of the day. Over time, Helwys became close friends with John Smyth and he and his family became members of Smyth’s congregation in Gainsborough.

Smyth, who was in a continual battle with the Church of England, finally broke away from them, became a “Separatist,” and formed the first “Baptist” church on English soil. He came to believe in believer’s baptism as opposed to infant baptism. Helwys agreed and maintained that a church cannot alter the mode or subject of baptism and hope to maintain a healthy church.

Helwys also believed that the local church should be responsible for selecting and ordaining their own pastors rather than some ecclesiastical hierarchy like the Church of England. Therefore, congregational authority became one of the principles embraced by the Baptist movement.

Helwys also believed in worship from the heart and promoted the concept of spontaneous worship rather than the rote recitations and mechanical readings of the Church of England.

Helwys had followed Smyth to Holland, but when Smyth began to move to toward Mennonite doctrine, Helwys and about a dozen others refused to go along. Helwys began writing what became some of the earliest of the modern Baptist confessions of faith declaring such things as ”no infants are condemned.” He became convinced that he was wrong to run from the persecution that awaited him in England and sailed across the North Sea with a recently composed manuscript on the Mystery of Iniquity in hand.

He found a publisher for the book and gave a dedicated copy to King James written in his own hand. The book’s title was taken from II Thessalonians 2:7, but Helwys exposed the Roman Catholic Church as the first beast in Revelation 13 and the second beast as the Church of England. He then turned to the importance of freedom of conscience and stated, “The king may rule over the people’s bodies and goods, but he has no right to give his power to be exercised over the spirits of his people.” In the book Helwys urged true believers to endure suffering and persecution rather than flee from it. The King’s response to the book was to imprison Helwys.

While Jones focuses his attention on Helwys’ view of ecclesiology – particularly contrasting the Baptist movement with the unhealthy churches of the English Reformation, the English Separatists, the European Reform movement, and the Roman Catholic Church – I gained a particular appreciation for his firm conviction about religious liberty. His book A Short Declaration of the Mystery of Iniquity stands out at a courageous treatise on religious liberty for all persons. That bold appeal for freedom of religion resonated with me because of what is happening in so many sectors of our nation today.

Jones probes deeply into the ecclesiology of 16th and 17th century England, exposing the deficiencies of the Church of England and highlighting the contributions of Helwys to the Baptist communion. The book is well researched, well written, and beautifully explains the price some of our Baptist forefathers have paid in order to preserve for us a healthy, biblical doctrine of ecclesiology.

Jones’ volume proves that as Baptists we can’t appreciate where we are; and we can’t stand firm to preserve what we have unless we understand the battles that were fought to give us the victories we now enjoy.