The Olympics: where faith gets a big stage 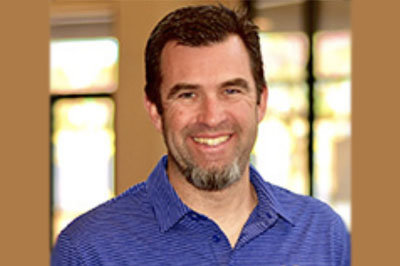 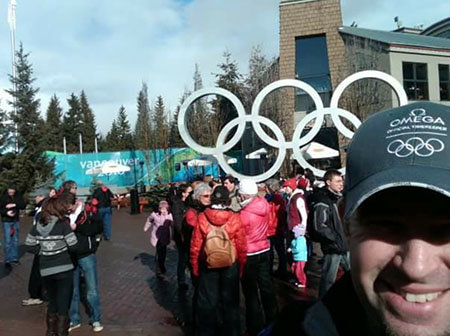 Derek Spain stands in Whistler Village, where he and other chaplains built relationships with Olympic athletes in Vancouver. DEREK SPAIN/Special

The Olympic Spirit brings out the best in everyone. Nations come together to compete in sport.

As we watch the 2018 Pyeonchang Winter Olympic Games, we witness the thrill of victory and the agony of defeat on display. Bobsled, skeleton, snowboarding, hockey, figure skating, curling, and freestyle ski jumping are just a few of the exciting sports on snow and ice.

Eight years ago, I had the honor to serve as a chaplain at the Vancouver Winter Olympic Games. I ministered alongside chaplains from Australia, the USA, Germany, Canada, Norway, and Great Britain, serving people and sharing Christ with athletes, coaches, and others from all over the world. Through the stories of the chaplains, I heard about some of the amazing things the Lord was doing through sports ministry all over the world.

Reflecting on that experience, here are some of the most powerful things I saw the Lord do during that time.

On the day of the Opening Ceremonies, tragically a luge athlete named Nodar from the Republic of Georgia died on a training run that went terribly wrong. His death shocked the Athletes Village and touched the world. God showed himself faithful to bring comfort and strength to athletes, coaches, and everyone affected by that tragedy. 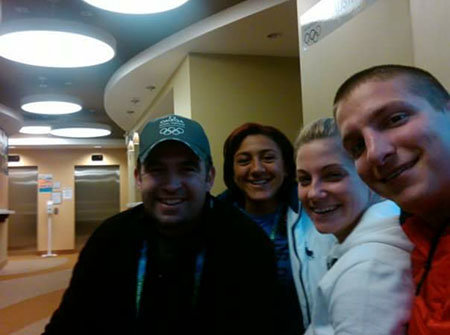 In Vancouver Spain and other chaplains built relationships with numerous athletes, such as American bobsledders (left to right) Elana Meyers Taylor, of Douglasville, Erin Pac, and John Napier. DEREK SPAIN/Special

I had the privilege to pray with one athlete from the Republic of Georgia who spoke English and was searching for answers during that difficult time. At the opening ceremonies that evening, there was a moment of silence for Nodar. The next day, one of our chaplains made the observation that almost one billion people worldwide watched the Opening Ceremonies broadcast. He asked this question, “When will there be another time that one life will impact one billion people, causing them to think about their own eternity?” Wow.

Each day inside the Athletes Village in Whistler, we led Bible studies for athletes, coaches, and others: one in the morning and one in the evening. Those who attended found their faith renewed, keeping their mind and heart focused on Christ during the Games. One athlete commented on how those Olympic Games felt a bit like a Christian retreat with all of the opportunities for fellowship, discipleship, evangelism, and prayer.

The number of gospel conversations that occurred during the Games will only be known in heaven. The 2010 Winter Olympics brought people together from all over the world, so the opportunities were literally everywhere. Through pin trading, serving coffee, Bible distribution, and in other ways, the Lord opened thousands of doors for sharing the good news.

“Rejoicing with those who rejoice and weeping with those who weep” was very obvious during the Games, as we ministered to athletes who won their competitions and other who did not. Helping the athletes to remember (win or lose) that medals are temporary but Jesus is eternal was important for us to share. 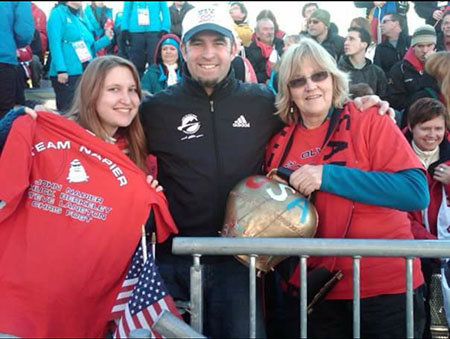 One story speaks powerfully of how disappointment can lead to a powerful statement of faith. USA 4-Man Bobsled driver John Napier was ranked #4 in the world heading into the Vancouver Games. An Olympic medal was definitely within his reach. but, the track in Whistler was particularly challenging, prone to dangerous crashes, as had already been tragically demonstrated by the death of the luge slider Nodar.

One crash meant elimination from the competition with no hope to medal.

Many of the top drivers had crashed during the race, and each time we had witnessed them slamming down their helmets, screaming profanities and looking totally destroyed. On his team’s second run, John Napier’s sled came through a tricky curve and crashed on its side. John later said that the mistake was his fault. The sled screeched down half of the track on its side, with the athletes’ helmets pounding the sled and the ice all down the track.

When their sled finally came to a stop, John jumped out first, making sure all of his teammates were OK. When he saw that they were, he looked directly into the camera and shrugged his shoulders as if to say, “What are you going do? Crashes happen. Life goes on.”

John had come to faith in Christ a few months earlier, and it was powerful to see that when his faith was put to the test in that moment, he proved himself to be a faithful follower of Jesus, win or lose. His light for Jesus was shining brightly on that day.

Where are the turkeys this year?