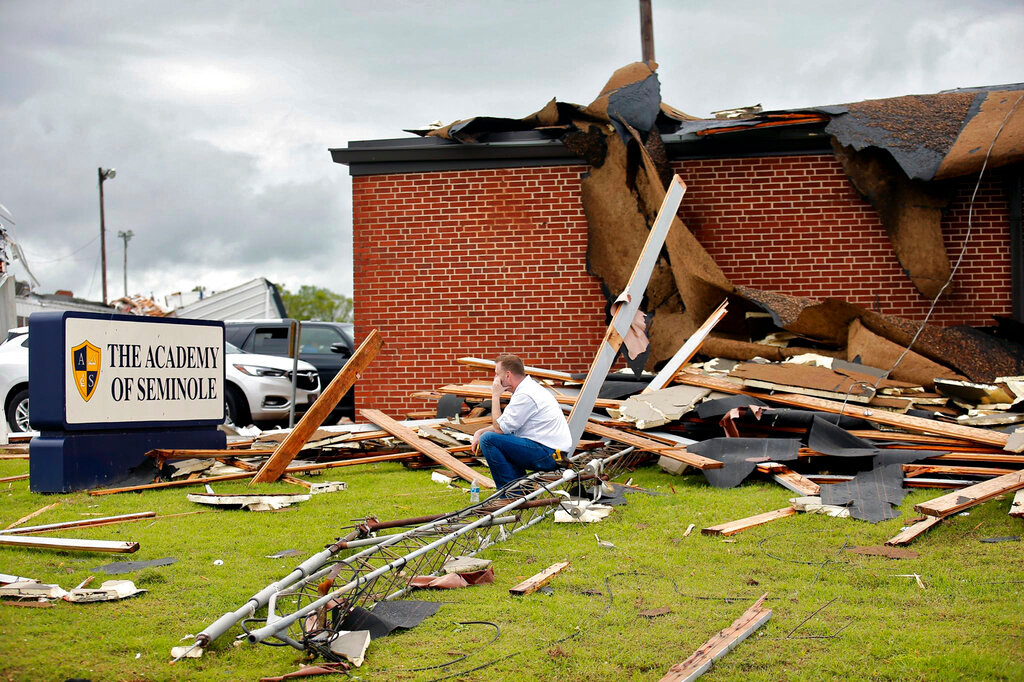 Paul Campbell, founder of the Academy of Seminole sits outside the tornado-damaged school in Seminole, Okla., Thursday, May, 5, 2022. A springtime storm system spawned several tornadoes that whipped through areas of Texas and Oklahoma, causing damage to a school, a marijuana farm and other structures. (Photo/Sarah Phipps, The Oklahoman via AP) 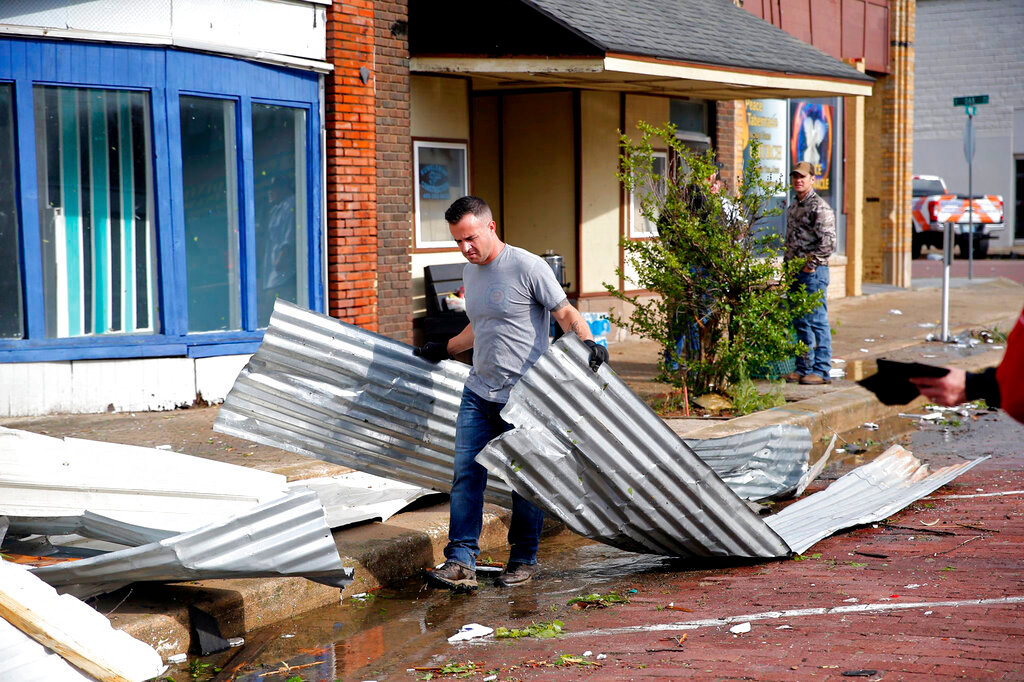 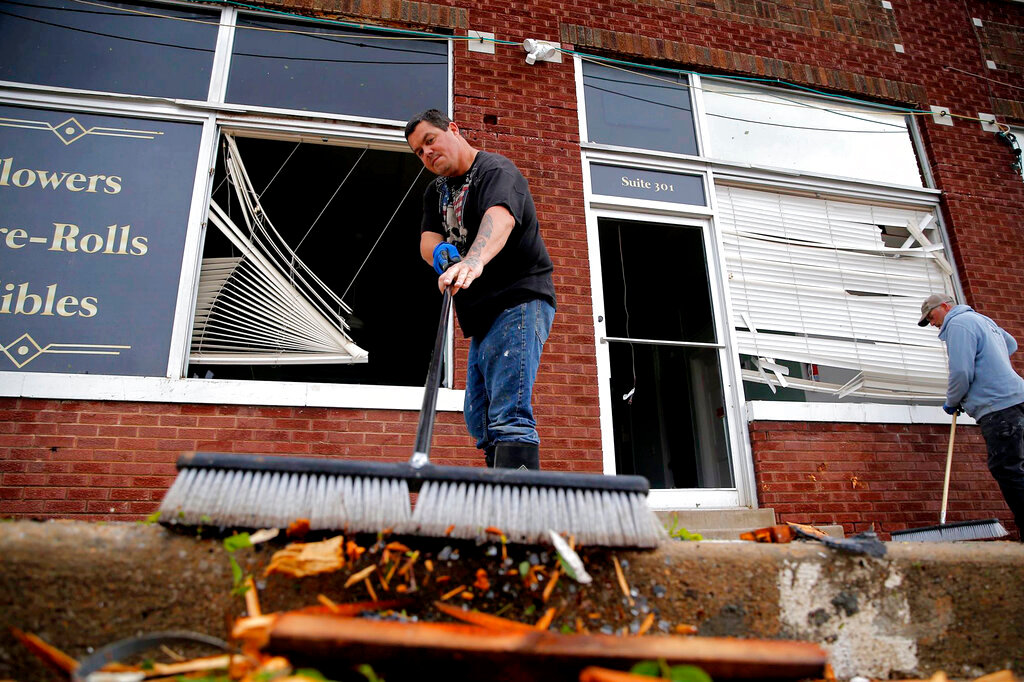 William Hawkins cleans up tornado damage in Seminole, Okla, Thursday, May, 5, 2022. The area was hit by strong storms Wednesday evening. (Photo/Sarah Phipps, The Oklahoman via AP) 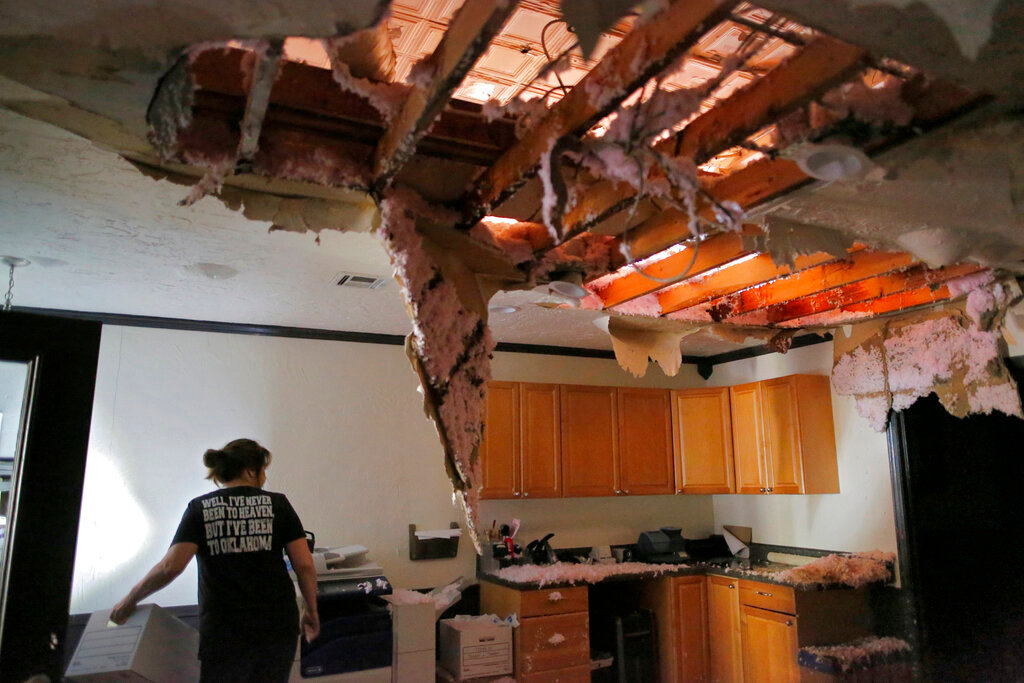 LeAnn Morgan cleans up tornado damage in Seminole, Okla., Thursday, May, 5, 2022. The area was hit by strong storms Wednesday evening. (Photo/Sarah Phipps, The Oklahoman via AP)
Previous Next
Posted Thursday, May 5, 2022 10:34 pm

SEMINOLE, Okla. (AP) — A storm system spawned several tornadoes that whipped through areas of Texas and Oklahoma, causing damage to a school, a marijuana farm and other structures.

There were no reports of serious injuries following the Wednesday night tornadoes, but the system caused flooding in parts of Oklahoma and Arkansas, and more stormy weather took place Thursday.

Significant damage was reported in the Oklahoma city of Seminole, about 60 miles (97 kilometers) southeast of Oklahoma City, where Gov. Kevin Stitt said damage assessments were underway after he toured the area Thursday.

“(We're) getting all the resources and supplies that the city wants and needs," including generators, Stitt said. “Thank the Lord that nobody was hurt” and no deaths have been reported.

More than 2,900 customers remained without power in Seminole late Thursday afternoon, according to Oklahoma Gas & Electric, more than 63% of the utility customers in the city.

The Academy of Seminole took a direct hit but no one was injured, the school said on Facebook.

Video footage from Oklahoma TV station KOCO showed a tornado hit a marijuana farm in the nearby town of Maud.

Several roads and highways were closed Thursday morning in parts of Oklahoma and Arkansas because of flash flooding.

In Bixby, Oklahoma, located south of Tulsa, officials opened a temporary shelter at a church after thunderstorms flooded some homes and streets in one neighborhood.

In East Texas, a tornado on Thursday damaged several campers and buildings at an RV park in Rusk County, Sheriff Johnwayne Valdez told KTRE-TV. Valdez said no injuries were reported.

On Wednesday, a “large and dangerous tornado” was spotted in the rural community of Lockett, about 170 miles (275 kilometers) northwest of Dallas, said the National Weather Service office in Norman, Oklahoma.

There were no significant injuries or deaths to residents in Wilbarger County, Sheriff Brian Fritze told KAUZ-TV. He said several homes and barns appeared to sustain extensive damage.

The storms on Wednesday and Thursday were the latest in several rounds of severe weather in the central United States. Last week, a tornado damaged more than 1,000 buildings in the Wichita suburb of Andover, Kansas. Three University of Oklahoma meteorology students died in a car crash while returning from storm chasing.

The storms, which were moving east into other southern U.S. states, could bring more tornadoes, large hail and damaging winds, and the threat of severe weather will continue Friday in parts of the South and over the weekend in the central Plains and Midwest, the weather service said.

Trump says he took the Fifth in NY civil investigation