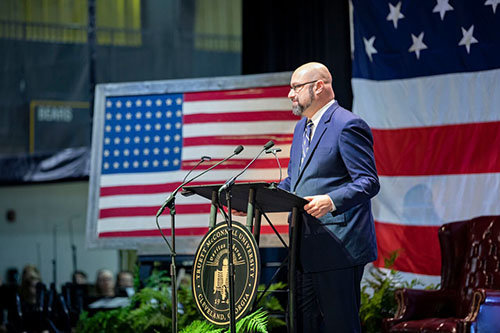 NOTE: An earlier version of this story indicated a business partnership between TMU and Nike had ended. That was incorrect. In actuality, TMU is taking the position of no longer offering Nike apparel being sold in its campus store. The Index regrets the error.

“America has sacrificially given my family the freedoms we enjoy today. My wife, who was raised under the oppression of socialistic communism, became a citizen five years ago, joyfully pledging allegiance to these United States and her flag,” Caner wrote in referencing his wife Hana’s life in Czechoslovakia.

“For Nike to then hire Colin Kaepernick, a person known for wearing pigs on his socks, mocking law enforcement, and kneeling against our flag, mocking our troops, is reprehensible to my family and to the Truett McConnell family.

“As such, TMU is discontinuing our relationship with Nike in athletics and our campus store. Any profits from remaining Nike gear sold through our campus store will be directly donated to Wounded Warriors and the Fraternal Order of Police.”

Though Nike is sold in the campus store, TMU's athletic teams are outfitted by Adidas.

Caner went on to say that TMU, the second college this week to sever ties with Nike, would reconsider its stance should the company choose to apologize to American troops and law enforcement officers.

In 2016 Kaepernick, then a quarterback from the San Francisco 49ers, began kneeling during the National Anthem, considering it a form of protest against oppression of people of color. Currently out of the league, Kaepernick narrated and appeared in a Nike ad during last night’s NFL opener between the Falcons and Eagles. The ad was a commemoration of the 30th anniversary of the shoe company’s “Just Do It” campaign.

Soon after learning of the ad, many took to social media in destroying or burning their Nike shoes and apparel. Nike stock fell from $82.18 to $79.01 per share, a four percent drop, between Friday, Aug. 31 and Tuesday, Sept. 4. On Thursday, prior to the ad's airing, the stock had climbed back to $80.40 per share.

TMU’s announcement comes two days after College of the Ozarks in Point Lookout, MO announced plans to remove all athletic uniforms purchased from Nike or that contain the Nike emblem.

“In their new ad campaign, we believe Nike executives are promoting an attitude of division and disrespect toward America,” said President Jerry C. Davis. “If Nike is ashamed of America, we are ashamed of them.”

Liberty University President Jerry Falwell Jr., said in a phone conversation with USA TODAY Sports that the ad could lead to the school also reconsidering its relationship with Nike. The company and Liberty signed a contract last year to suit the university’s teams through 2024.

“We’re exploring the situation,” Falwell said. “If Nike really does believe that law enforcement in this country is unfair and biased, I think we will look around. If we have a contract, we’ll honor it, but we strongly support law enforcement and strongly support our military and veterans who died to protect our freedoms and if the company really believes what Colin Kaepernick believes, it’s going to be hard for us to keep doing business with them.”

Falwell added that the relationship may remain should the ad be nothing more than a “publicity stunt.”

“We understand how marketing works. But they’re going to have to convince us that they’re not proactively attacking law enforcement officers and our military. If that’s the reason behind using this ad, we’re going to have a hard time staying.”