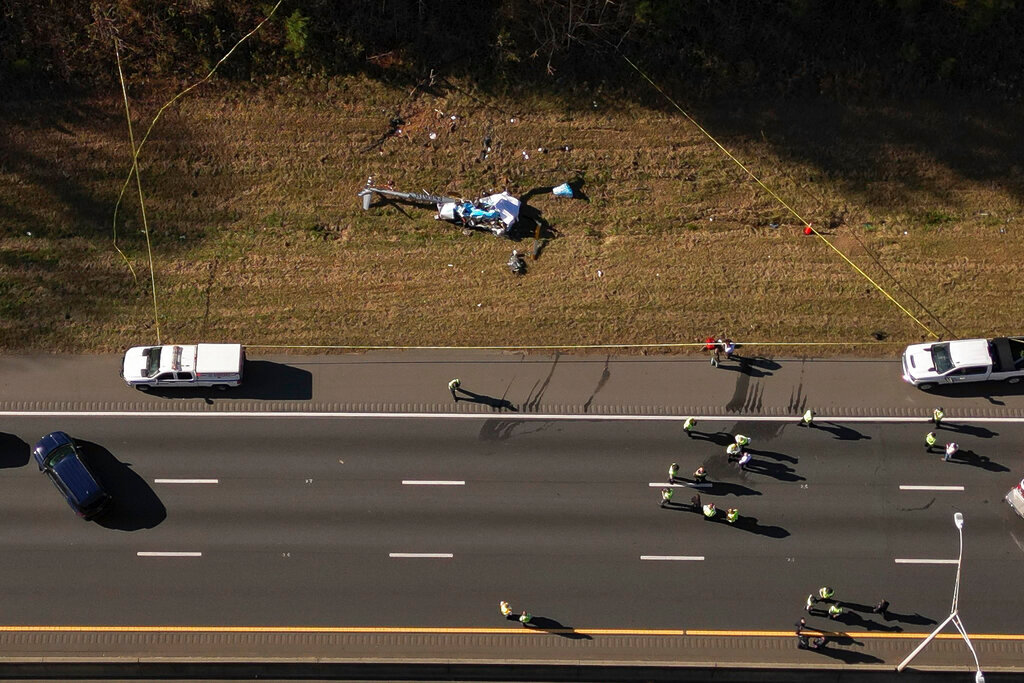 In this image take with a drone, emergency personnel work at the scene of a helicopter crash on the side of Interstate 77 South in Charlotte, N.C., Tuesday, Nov. 22, 2022. Authorities said two people died. ( (Alex Slitz/The Charlotte Observer via AP)
Alex Slitz
Posted Tuesday, November 22, 2022 6:51 pm
By BEN FINLEY and HANNAH SCHOENBAUM, Associated Press

RALEIGH, N.C. (AP) — A helicopter pilot and a meteorologist who worked for a North Carolina television station died Tuesday when a news helicopter crashed along a Charlotte-area interstate, with police praising the pilot for heroically avoiding the roadway in his final moments.

Meteorologist Jason Myers and pilot Chip Tayag were identified as the people killed in the crash in a statement by WBTV — and by coworkers who'd been reporting on the crash live from the station's studio.

Fighting back tears, anchors Jamie Boll and Molly Grantham mourned their colleagues while providing updates during a broadcast that carried on uninterrupted for hours. They included witness reports that Tayag prevented the helicopter from crashing onto Interstate-77 during a busy week of holiday travel.

“Jamie and I are learning it here as our newsroom is learning it and trying to figure it out while deeply grieving …,” Grantham said during the broadcast. “We’re giving the news and we’re all — all — of our WBTV family grieving Chip and Jason because we love them.”

The Robinson R44 helicopter crashed shortly after noon local time with two people on board, the Federal Aviation Administration said in a statement. The Mecklenburg County EMS Agency said the two were pronounced dead at the scene.

Police said that no vehicles on the ground were involved in the crash, which still snarled traffic on the major highway.

“The pilot is a hero in my eyes,” tweeted Johnny Jennings, chief of the Charlotte-Mecklenburg Police Department. “Witnesses indicated that the pilot made diversionary moves away from the highway to save lives. Because of his heroic acts, there were no further injuries or vehicles on the highway involved in the incident.”

The chief also told reporters: “We’re looking at going into the holiday season where we’re supposed to be spending time with our loved ones. And tragically, there are two people involved in this crash that will not be going home and will not be spending the holidays with their family.”

Anchors Boll and Grantham spent at least 90 minutes providing live coverage before halting to confirm the deaths of Myers and Tayag, having made sure their families were notified.

“The words are hard to come by folks, we’ve been holding on to this for a while,” Boll said, his voice wavering before he cleared his throat.

Boll had seen Tayag at 11 a.m. Tuesday morning as the pilot sat in the helicopter, preparing to pick up Myers, the meteorologist.

“Those smiles you see right there on your screen, those are those two people,” Boll said from the anchor desk.

“Every single day in this newsroom, Chip would wave at you say hello, ask you how you’re doing. He'd wave from behind the pilot's chair of the helicopter," Boll said. "Jason Myers — I could go on and on. He would bound through this newsroom with incredible energy and smiles and just cared about everybody here.”

Myers was raised in North Carolina's Union and Catawba counties and worked in the city of Raleigh, and in Texas and Virginia before returning to the Charlotte area where he grew up, WBTV said. He and his wife Jillian have four children.

Tayag had been a pilot for more than 20 years, the station said. He began working for WBTV in 2017 and celebrated his three-year wedding anniversary in August, according to his Instagram page.

Gov. Roy Cooper offered his condolences to the station and the North Carolina press corps at large.

“This is a terrible tragedy for the WBTV family and we are praying for them and all of those in the media who work so hard to keep the public informed,” Cooper wrote in a tweet.

The National Transportation Safety Board will lead an investigation into the crash along with the FAA.