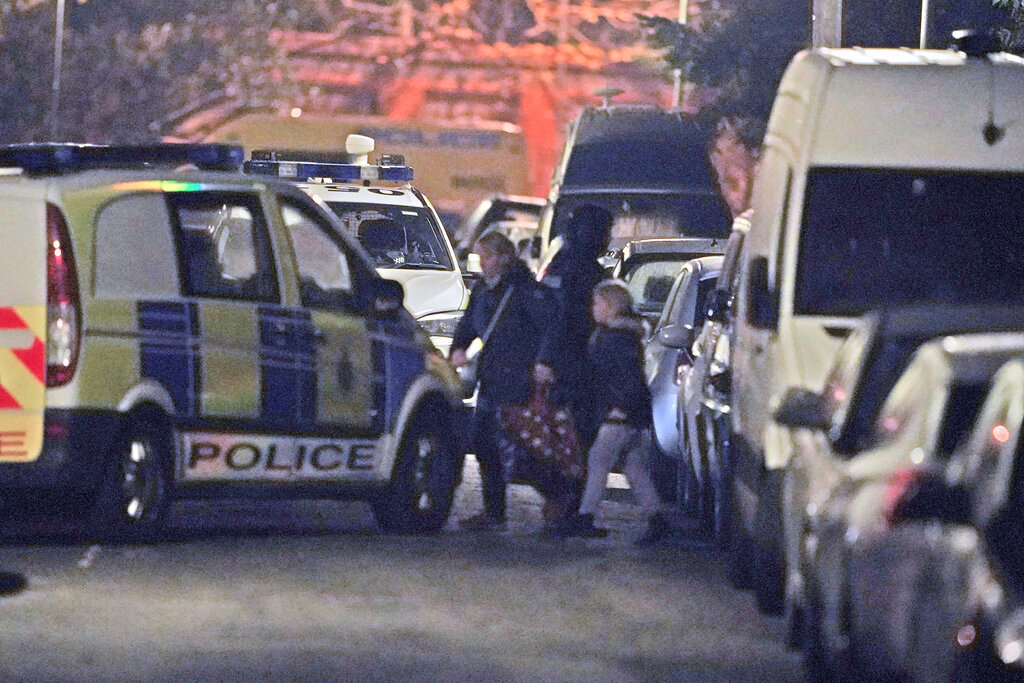 Armed police evacuate local residents during an incident an address in Rutland Avenue in Sefton Park, after an explosion at Liverpool Women's Hospital killed one person and injured another. Three men have been arrested under the Terrorism Act. Picture date: Sunday November 14, 2021. PA Photo. Merseyside Police were called to reports of a blast involving a vehicle, believed to be a taxi, at Liverpool Women's Hospital at 10.59am on Sunday. Counter Terrorism Police North West said three men, aged 29, 26, and 21 were detained in the Kensington area of the city and arrested under the Terrorism Act in connection with the incident. See PA story POLICE Hospital. Photo credit should read: Peter Byrne/PA Wire
Peter Byrne
Posted Monday, November 15, 2021 2:42 pm
By JILL LAWLESS and DANICA KIRKA, Associated Press

LONDON (AP) — British authorities raised the country's threat level to its second-highest rung on Monday, after police said a blast in a taxi outside a Liverpool hospital was caused by a homemade bomb.

Investigators said they were treating Sunday's explosion — which killed the suspected bombmaker and injured the cab driver — as a terrorist incident, but that the motive was unclear.

Counterterrorism police named the dead man as 32-year-old Emad Al Swealmeen. They did not give further details, though Britain’s Press Association news agency and other media reported that he had not been on the radar of the security services.

The Joint Terrorism Analysis Centre raised the U.K. threat level from substantial — meaning an attack is likely — to severe, meaning it is highly likely, following the U.K.'s second fatal incident in a month. Conservative lawmaker David Amess was stabbed to death in October in what police said was an act of terrorism.

Prime Minister Boris Johnson condemned the “sickening attack” at Liverpool Women's Hospital and told reporters that the British people “will never be cowed by terrorism.”

“We will never give in to those who seek to divide us with senseless acts of violence,” he said.

The male passenger in a taxi was killed and the driver injured when a blast ripped through the vehicle as it pulled up outside the hospital on Sunday morning. Russ Jackson, the head of Counterterrorism Policing in northwest England, said the explosion was caused by “the ignition of an explosive device” that was brought into the vehicle by the passenger.

Three men in their 20s were arrested elsewhere in the city Sunday under the Terrorism Act and a fourth was detained on Monday. All are believed to be “associates” of the dead passenger, police said.

Suspicions about a motive for the explosion have been aroused by the timing — just before 11 a.m. on Remembrance Sunday, the moment when people across Britain hold services in memory of those killed in wars.

Jackson said investigators had not found a link to remembrance events “but it is a line of inquiry we are pursuing.”

“Although the motivation for this incident is yet to be understood, given all the circumstances, it has been declared a terrorist incident," he said at a press briefing.

He said the passenger had been picked up by the cab a 10-minute drive away and asked to be taken to the hospital, where the explosion occurred. The driver, named by local media as David Perry, managed to escape from the car. He was treated in the hospital and released.

Police said officers had searched two addresses in the city linked to the passenger — one where he had lived and a second he had recently rented — and found “significant items” at the latter. Officers performed a controlled explosion “as a precaution" as part of the investigation.

Liverpool Mayor Joanne Anderson said the taxi driver had locked the doors of his cab so the passenger couldn’t leave. Police did not confirm that account.

“The taxi driver, in his heroic efforts, has managed to divert what could have been an absolutely awful disaster at the hospital,” Anderson told the BBC.

The prime minister also said the driver appeared to have behaved “with incredible presence of mind and bravery.”

Nick Aldworth, a former senior terrorism investigator in Britain, said the taxi appeared to have sustained “a lot of fire damage with very little blast damage.”

He said “whatever was in that vehicle was either a low yield, or didn’t work properly, or possibly an incendiary. So I think it’s very much open to debate at the moment about what has happened.”

Britain’s official terrorism threat level was lowered from “severe” to “substantial” in February. It has been at severe most of the time since 2014, briefly rising to “critical” amid a spate of violent attacks in 2017. The Joint Terrorism Analysis Centre sets the threat level based on intelligence about international terrorism at home and overseas.

Britain has experienced attacks by both Islamic and far-right extremists over the years, including a May 2017 suicide bombing at an Ariana Grande concert in Manchester that killed 22 people.

Amess was stabbed to death Oct. 15 while meeting with constituents, in what police said was an act of terrorism by a supporter of the Islamic State group. His slaying came five years after Labour Party lawmaker Jo Cox was shot and stabbed to death by a far-right extremist.