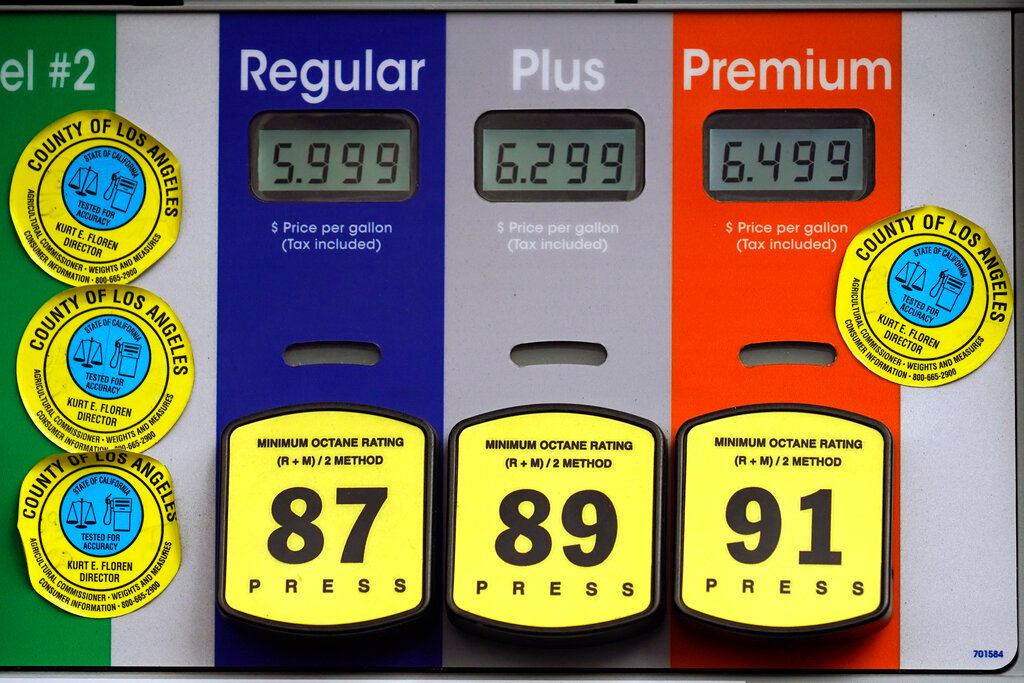 High gas prices are posted at a full service gas station in Beverly Hills, Calif. The average U.S. price of regular-grade gasoline jumped by 5 cents over the past two weeks, to $3.49 per gallon. The price at the pump is $1.30 higher than a year ago. Industry analyst Trilby Lundberg of the Lundberg Survey said Sunday the rise comes as the cost of crude oil and ethanol surges. Nationwide, the highest average price for regular-grade gas is in the San Francisco Bay Area, at $4.77 per gallon. The lowest average is in Houston, at $2.98 per gallon. (AP Photo/Damian Dovarganes)
Damian Dovarganes
Posted Wednesday, November 10, 2021 9:45 am
By CHRISTOPHER RUGABER, Associated Press

WASHINGTON (AP) — Prices for U.S. consumers jumped 6.2% in October compared with a year earlier as surging costs for food, gas and housing left Americans grappling with the highest inflation rate since 1990.

The year-over-year increase in the consumer price index exceeded the 5.4% rise in September, the Labor Department reported Wednesday. From September to October, prices jumped 0.9%, the highest month-over-month increase since June.

Inflation is eroding the strong gains in wages and salaries that have flowed to America's workers in recent months, creating political headaches for the Biden administration and congressional Democrats and intensifying pressure on the Federal Reserve as it considers how fast to withdraw its efforts to boost the economy.

Driving the price spikes are persistent supply shortages resulting from robust consumer demand and COVID-related factory shutdowns coming out of the pandemic recession. Ports across the world have become bottlenecked. America's employers, facing labor shortages, have also been handing out sizable pay increases, and many of them have raised prices to offset their higher labor costs, thereby contributing to inflation.

The result has been accelerating prices for a broad range of consumer goods, from food, heating oil and patio furniture to paints, chemicals and window blinds. After initially affecting mainly goods in pandemic-disrupted industries, surging inflation has broadened into the many services that Americans spend money on, notably for restaurant meals, rental apartments and medical services, which jumped 0.5% in October.

Job gains and pay raises have been much healthier during the pandemic recovery than they were after the Great Recession roughly a decade ago. But in contrast to the years that followed that downturn, when inflation was low, rising prices are diminishing Americans' confidence in the economy, surveys have found.

In October, excluding the volatile food and energy categories, so-called core prices rose 0.6% from September. Core prices are now up 4.6% compared with a year ago.

Energy costs soared 4.8% just from September to October, with gasoline, natural gas and heating oil surging for the same reason that many other commodities have grown more expensive: Demand has risen sharply as Americans are driving and flying more, but supplies haven’t kept up.

In the past year, energy costs have jumped a whopping 30%, with gasoline soaring nearly 50%. Natural gas prices are also soaring, and so is heating oil. The Energy Information Administration forecasts that these increases will bite hard this winter, with Americans expected to spend 30% more on natural gas and 43% more on heating oil.

Economists still expect inflation to slow once supply bottlenecks are cleared and Americans shift more of their consumption back to pre-pandemic norms. As COVID-19 fades, consumers should spend more on travel, entertainment and other services and less on goods such as cars, furniture, and appliances, which would reduce pressure on supply chains.

But no one knows how long that might take. Higher inflation has persisted much longer than most economists had expected. And inflation is spreading well beyond items like appliances and new and used vehicles that are directly affected by the pandemic.

“The inflation overshoot will likely get worse before it gets better,” said Goldman Sachs economists in a research note Sunday.

For months, Federal Reserve Chair Jerome Powell had described inflation as “transitory,” a short-term phenomenon linked to labor and supply shortages resulting from the speed with which the economy rebounded from the pandemic recession. But last week, Powell acknowledged that higher prices could last well into next summer.

The Fed chair announced that the central bank will start reducing the monthly bond purchases it began last year as an emergency measure to boost the economy. Investors now expect the Fed to raise its benchmark interest rate twice next year from its record-low level near zero — much earlier than they had predicted a few months ago.

Many large companies are passing on the cost of higher pay to their customers, and in some cases, consumers are paying up rather than cutting back.

Fast food prices soared 7.1% in October from a year earlier, the government said Wednesday. That was the largest such increase on record, reflecting higher costs for beef and other foods as well as rapidly rising labor costs.

To attract workers, for example, McDonald’s boosted hourly pay 10% to 15% over the past year. To help cover those higher labor costs as well as more expensive food and paper, the company said last month that it raised prices 6% in the July-September quarter from a year earlier. Yet even so, company sales leapt 14% as virus restrictions eased.

Other companies have been more cautious. One of them, Wayfair, an online furniture retailer, said last week that its costs are rising as factories in Asia have shut down amid COVID outbreaks, ports are jammed, and labor costs have surged. But the company isn’t necessarily passing along all those higher costs.

“We are in a mass-oriented business where the average customer does not have an unlimited discretionary budget,” said Michael Fleisher, Wayfair’s chief financial officer. “Inflation is rampant across the economy, and there are competing demands for their time and wallet share.”