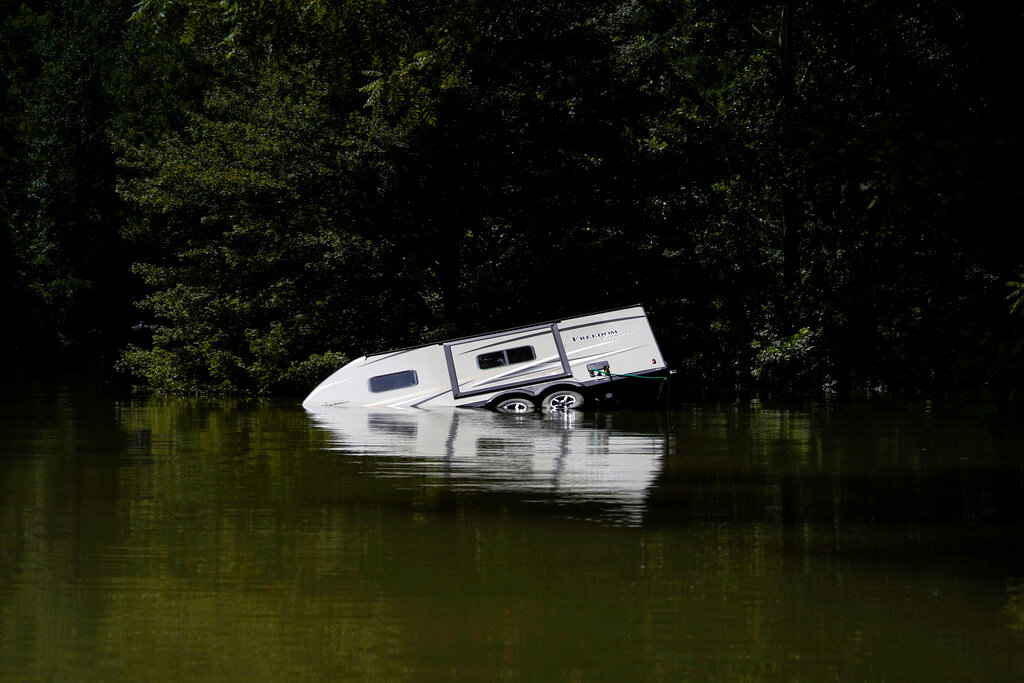 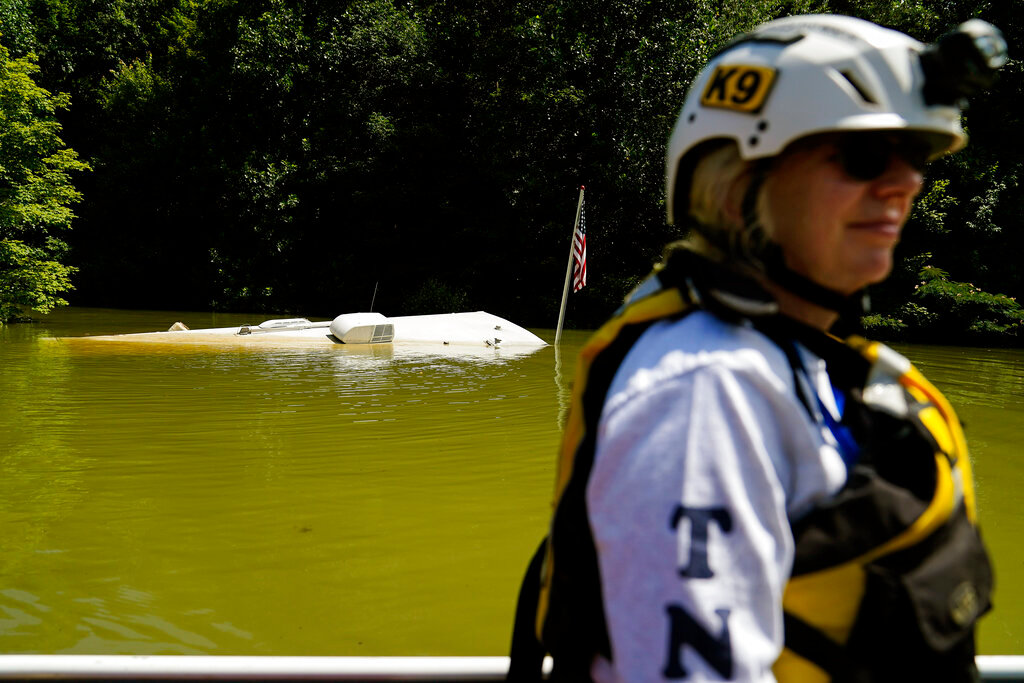 A submerged camper with an American flag attached is seen as Jackie Johnson rides by in a boat in Carr Creek Lake on Wednesday, Aug. 3, 2022, near Hazard, Ky. (AP Photo/Brynn Anderson) 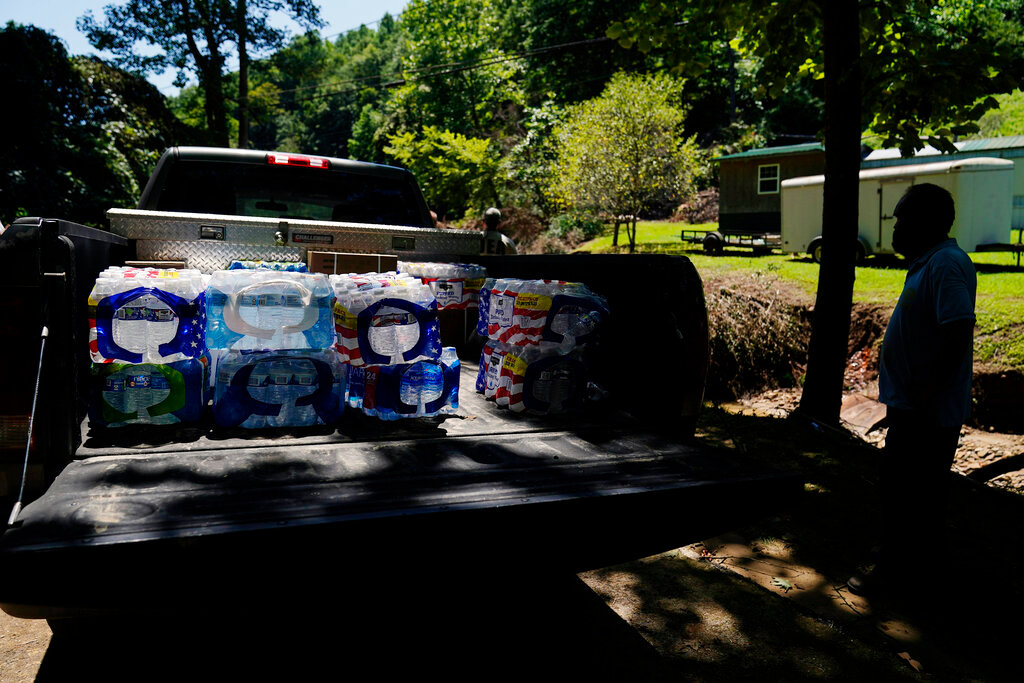 A local resident stands in the shade near a truck filled with water and supplies for people affected by flooding on Wednesday, Aug. 3, 2022, near Hazard, Ky. (AP Photo/Brynn Anderson)
Previous Next
Posted Thursday, August 4, 2022 12:03 pm
By BRUCE SCHREINER, Associated Press

In the days since historic flooding swamped the Appalachian region, the availability of water surfaced as a concern for victims after the floodwaters badly damaged water systems. As donations poured into the region, water was a top priority, along with cleaning supplies.

“We are moving water as fast as we can,” Kentucky Gov. Andy Beshear said Wednesday.

National Guard soldiers had distributed more than 2,400 cases of water by early Wednesday, the governor said, as intense heat and humidity added to the misery as people continued shoveling out from the immense wreckage left by flooding that struck in the middle of the night a week ago.

Water service has been restored to many people in the region, the governor said. But work is continuing on heavily damaged water systems. Other systems were “wiped out,” Beshear said. In some areas, it could take weeks or even months to repair water systems, he said.

“It’s going to take significant time and significant dollars to restore what was destroyed,” he said.

Water crews from across the state are assisting in the repairs, Beshear said.

Beshear said a special legislative session will likely be needed to devise a relief package for the flood-stricken region. The governor holds the power to reconvene lawmakers for a special session.

Beshear said a state relief package should include aid to repair water systems to spare the region’s ratepayers from footing the repair costs through higher water rates.

“Because otherwise, they’re going to go to ratepayers,” he said. “So people who just lost everything that are rebuilding would have their water rates just skyrocket in what it would cost.”

While the stifling heat and humidity continued to be a concern Thursday, the National Weather Service warned of more rain in the forecast for the region. Slow-moving thunderstorms could dump heavy rainfall and lead to more high water Thursday and Friday in areas still reeling from massive flooding a week ago, the weather service said.

Scattered thunderstorms with high winds were expected mainly Thursday afternoon and evening. Along with heavy rain, the storms could produce strong and damaging wind gusts.

The statewide death toll from the historic flooding is 37, the governor said. Amid the massive cleanup, families were preparing to bury loved ones killed in the flooding. Initial expenditures from a relief fund opened by Beshear were being distributed to pay funeral expenses of flood victims.

The outpouring of support was evident across the area. Volunteers helped remove debris from homes, while others served meals. Beshear said it’s a time for people to lean on each other and urged them to seek help in dealing with the trauma.

“Remember, it’s OK not to be OK,” the Democratic governor said. “I don’t think our brains or hearts are designed to deal with trauma and loss at this level.”

Teams searching streams in boats and combing debris-clogged creekbanks have rescued more than 1,300 people and crews were still trying to reach some people cut off by floods or mudslides. A few thousand customers still lacked electricity in eastern Kentucky. Emergency shelters and area state parks housed hundreds of residents who fled homes that were destroyed or badly damaged. Many more are staying with relatives and friends.

Cooling centers were opened after forecasters warned of the risk of heat-related illnesses.

President Joe Biden declared a federal disaster to direct relief money to counties flooded after 8 to 10 1/2 inches of rain fell in just 48 hours last week in the Appalachian mountain region.

The flooding also hit areas just across the state line in Virginia and West Virginia.