What a turtle has to do with guilt, forgiveness, and grace 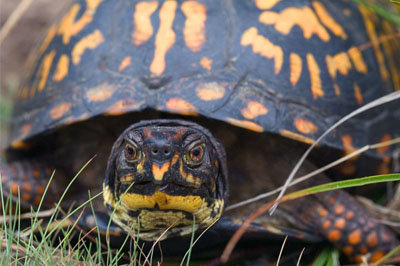 One of my favorite pastimes while living in Evans, GA was sitting on my front porch late in the afternoon and talking on the phone with some of my preacher friends while drinking iced coffee. One day I noticed a small turtle coming out of the yard next door and making his way into our yard. He went into the azaleas near some pine trees. A few days later I saw him again as he made his way to the same spot. His routine was so consistent that I started looking for him every day. The turtle became a “buddy” of mine and I wished him well.

I think that my attachment to that turtle was rooted in the fact that when I was eleven years old I had another unforgettable turtle experience. At that time we lived on the north side of Tifton. There was an unpaved road in front of our house, a peanut field on the other side.

I was in a Cub Scout Pack and had been given a Boy Scout knife with a leather sheath. I thought it was the coolest thing in the world to wear that Boy Scout knife on my hip. I got really good with that knife. I could throw it with great accuracy.

One day I was behind our house near a small Mimosa tree when I saw a little box turtle. I picked him up to play with him, but he pulled himself back into his shell and closed the door. Then a devilish thought entered my mind. I asked myself: “Why don’t you stick the point of your knife right in there where he closed his shell and kill him?” For some strange, diabolical reason I did it. I put the point of that Boy Scout knife right in that slight opening and shoved it to the hilt. He “hissed” when the knife found its mark. His legs spread straight out in all four directions and he was gone.

Suddenly, I was smitten with guilt. I ran from the yard toward the field behind our house and threw that turtle as far as I could throw him. I thought I had cast my sin out of sight and would never have to think of it again. How wrong I was. I will never forget going back up to our house and washing that turtle’s blood off of my Boy Scout knife. The event was over but it had lasting consequences.

He “hissed” when the knife found its mark. His legs spread straight out in all four directions and he was gone.

I experienced guilt and depression for years as I reflected upon my murder of the turtle. I was haunted by that memory and when it surfaced I would pray and beg God to take it away. My confession would provide a measure of peace, but it always surface again.

Through my teenage years and even after I was married I continued to be plagued by the memory of killing that turtle. Even after God called me into the ministry and I was preaching on repentance and forgiveness I would have an occasional bout with this troubling guilt.

When I was the pastor of Metter Baptist Church, I was walking to the church one Sunday morning with my sermon prepared and looking forward to the day. I had just gone through another bout with guilt and I couldn’t understand why I could not get any lasting peace about it.

As I walked to the church I said to the Lord: “I don’t understand this! Why won’t it go away? Why am I continually bothered with this guilt and depression? I am asking you to forgive me.”

God spoke very clearly back to me and said: “Forgive you for what, Bill?”

God very clearly said, “No, Bill, I don’t remember that.”

To which I replied, "God, you have GOT to remember. If I can remember it I know you can!”

Then He clearly impressed something upon my heart, saying, “Bill, that’s where you are wrong. I forgot something that you are still remembering. I remember it no more. I forgave it and forgot it long ago. You are suffering because you are remembering something I chose to forgive and the devil has convinced you that I am still holding you accountable.” All of a sudden, it was gone. God finally got through to me about forgiveness and cleansing.

Our enemy, Satan, knows something about human nature that we don’t seem to understand. He knows if he can get us to remember something that he can make us feel the guilt of it all over again and cripple our witness. But remember this: just because you can remember it does not mean that you are guilty of it.

"You are suffering because you are remembering something I chose to forgive and the devil has convinced you that I am still holding you accountable.”

The Bible says that God has thrown our sins behind his back, cast them into the deepest part of the sea, and flung them out into the furthermost edge of the universe. They are gone and people are not spiritually mature enough to realize that the Devil is causing us to remember something God has forgotten in order to keep us from being all that God wants us to be. Satan cannot get your soul if you are saved, but he can keep you miserable in your Christian life and your service to God.

Over the years, I have used this story about a little turtle to let people know that if God has forgotten something, then it is forgotten forever and if He forgets it then people should do the same. He is the one who will judge us and if the Judge has forgotten our sins covered by the Blood of Jesus then why should we let them continue to bother us?

If God is satisfied then we should be also. They are forgiven; forgotten forever.

Make the most of Holy Week

Prodigal daughter returns home, leads most of her family to Christ

A call for men and mentoring

What Happened to the Third Stanza?