With team delayed, Mt. Olivet turns to prayer and faith 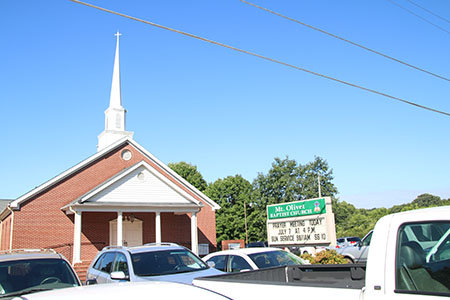 Cars packed the parking lot for the 9 a.m. worship service at Mt. Olivet Baptist Church near Hartwell this morning. Pastor Jason Webb addressed the congregation from Haiti via FaceTime at the beginning of the service. SCOTT BARKLEY/Index

HARTWELL — Around 10:30 this morning Alison Webb received the news from her husband, Jason, that she knew was possible but hoped wouldn’t be the case.

It probably wouldn’t be safe for the team from Mt. Olivet Baptist Church to make the two-hour trip to Port Au Prince to fly home today, she learned. Minutes later it would be confirmed. Demonstrators against the country’s recent gas price increase had blocked the road with two 18-wheel trucks and removed the tires.

Webb and 21 others from Mt. Olivet were supposed to be home today. They would report of the orphans to whom they ministered in the city of Montrouis through Vacation Bible School as well as the shoes and toys donated by the church. Their report would talk about the hundreds of Haitians receiving free medical care over the last week. 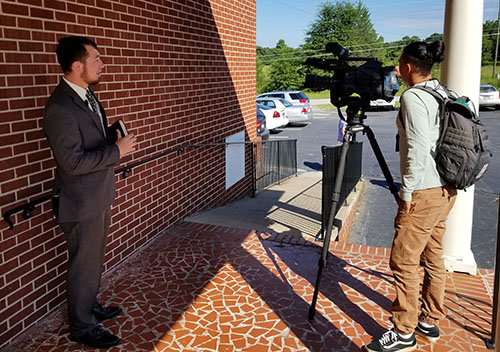 Associate Pastor Caleb Bond speaks to media out of South Carolina between worship services at Mt. Olivet Baptist Church. Other outlets in Atlanta are also covering the story of the group of Georgia Baptists currently stuck in Haiti. SCOTT BARKLEY/Index

News spread Friday night the group would be delayed at least a day, with hope of catching a 4:50 p.m. Delta flight Sunday. Communication has remained clear, with Jason Webb checking in through FaceTime to a community-wide prayer gathering Saturday and at the beginning of the 9 a.m. worship service today.

However, the distance and situation has led to some anxiety as well as a renewed prayer for the people of Haiti.

This afternoon the church received an update that protests were expected to continue Monday and Tuesday. With Tropical Storm Beryl expected to hit the Dominican Republic and Haiti Tuesday afternoon, the earliest flight the team could find back home is Friday.

“They are booked for that Friday flight, but are praying for and searching for an earlier one,” Alison Webb told The Index via text. “All prayers are appreciated.”

“He’s been on mission trips around the world,” said Alison, Webb’s wife of 17 years. “He’s been to Africa, Nicaragua – some things happened in Sri Lanka but nothing that delayed them from leaving like this. 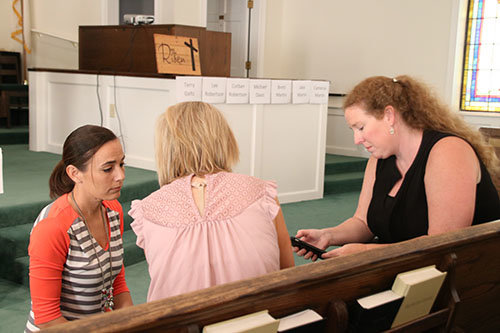 Left to right: Jamie McLain, Erica Robertson, and Alison Webb talk and check their phones for any updates on the mission team from Mt. Olivet Baptist Church near Hartwell. McLain's mother, Terry Goltz, is with the team waiting for a safe opportunity to leave as are Robertson's husband and son and Webb's husband Jason, who serves as pastor of the church. SCOTT BARKLEY/Index

“Jason always says ‘It’s fine’ to reassure us. The group is in a compound with security. That also have several wonderful Haitian nationals bringing information and checking on safety levels.”

While talking with The Index, Alison reiterated the love Mt. Olivet and her husband have for the Haitian people, present circumstance included.

The mission trip was hosted through Acts 1:8 Missions Ministry, which began at Mt. Olivet through church members Slate and Ginger Bauknight but has grown to include other churches in the area. The Bauknights and one of their children, Clay, are among the group in Haiti.

Between the 9:00 and 11:00 services at Mt. Olive this morning, Alison Webb received the news that the road to Port Au Prince had been blocked by trucks. The removed tires would probably be used to set more fires. The group floated the idea of taking another way to the airport through the mountains, but it would add another hour of travel and was soon scrapped.

Erica Robertson’s husband, Lee, is in Haiti along with their 12-year-old son, Corban. The couple’s other two children – Ian, 8, and Vera Kayte, 3 – are at home with Erica. 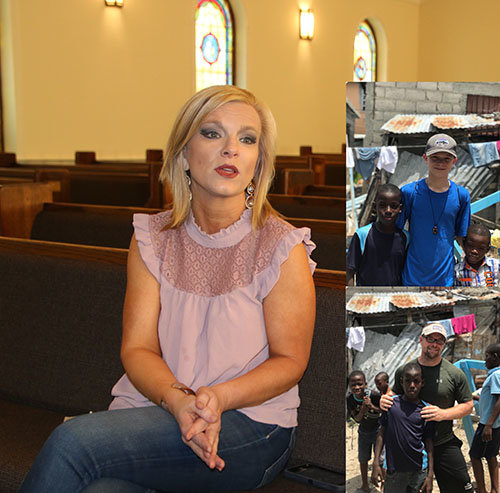 Erica Robertson's husband, Lee, and 12-year-old son, Corban, are among the group from Mt. Olivet still in Haiti. SCOTT BARKLEY/Index

In a span of ten minutes Friday night, everything changed, she said.

“I got a text from him that everything was alright and then he tried to call me, but I missed it. He called my mom then, and I knew something wasn’t right. I thought he was kidding when he said there were riots going on,” she said.

This is the second mission trip to Haiti for Lee, a captain in the Georgia Department of Public Safety. Corban, on his first mission trip, distributed several pairs of shoes, including his own he brought from home, to children over the last week.

“They’d also been working in the medical clinic for three or four days and checked the blood pressure of hundreds of people,” Erica added. “They don’t regret going and have enjoyed ministering. Lee got to meet up with some people he met last time.”

By the beginning of the 11 o’clock service, word had passed through the congregation that the group wouldn’t be returning as soon as hoped.

Bond, who hadn’t been scheduled to preach, spoke from Mark 4:37-41 in both services. He reminded those gathered that the storm comes, but it doesn’t conquer. Jesus, Bond noted, is all you need to pull through.

“There are mixed emotions right now,” he acknowledged to The Index prior to the 11 a.m. service. “They know God is in control, but anxious to see their friends and family. They’re ready for them to come home.”

While FaceTiming with the church earlier, Jason Webb got to see the full congregation as well as his children, ten-year-old Jacob and seven-year-old Nancy Beth, waving from the front row. He reassured everyone they were safe and the group appreciated the prayers. He also added again their love for the Haitian people.

Shortly after finishing the communiqué, Webb and the Mt. Olivet team gathered together for their own time of worship, separated by 1,235 miles and civil unrest, but held together by faith that they'll be home soon.