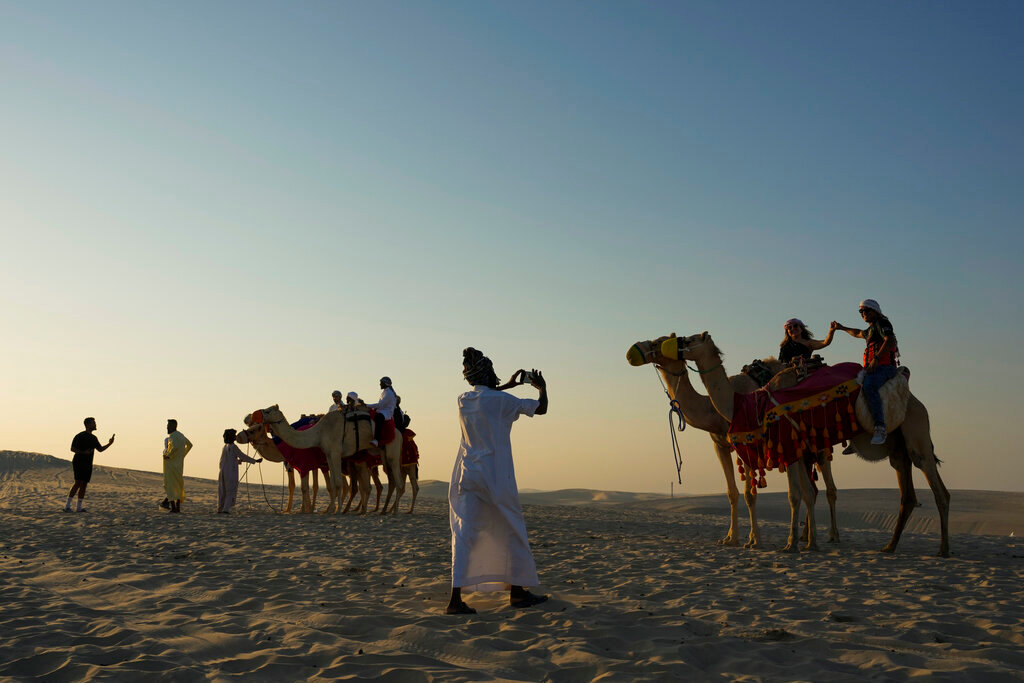 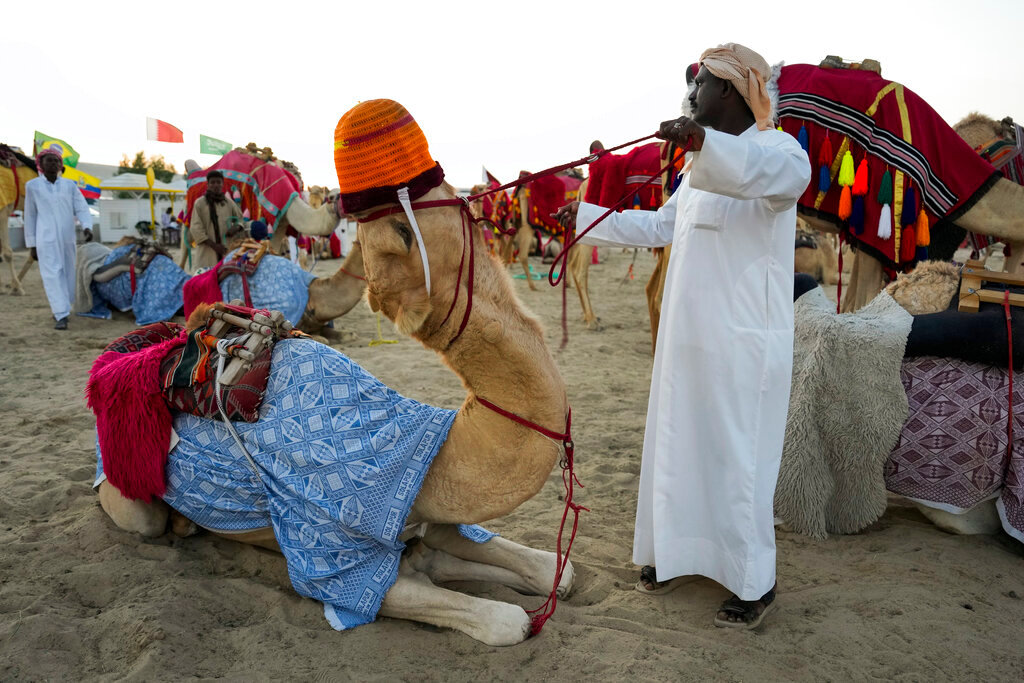 A camel pulls back as a guide tries to prepare it for a tour in Mesaieed, Qatar, Nov. 26, 2022. (AP Photo/Ashley Landis) 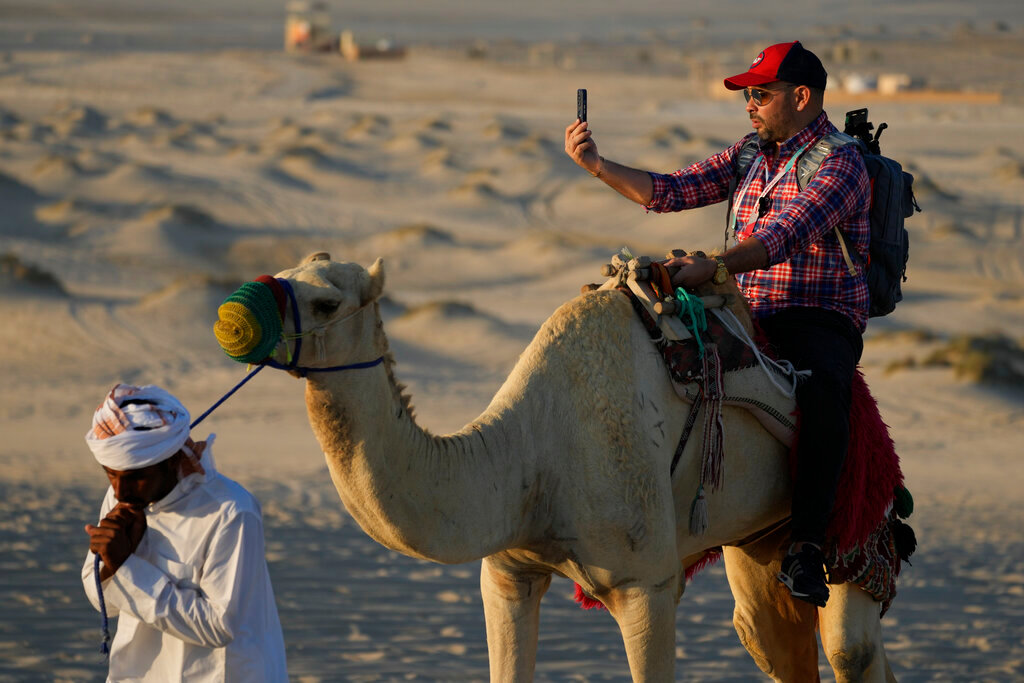 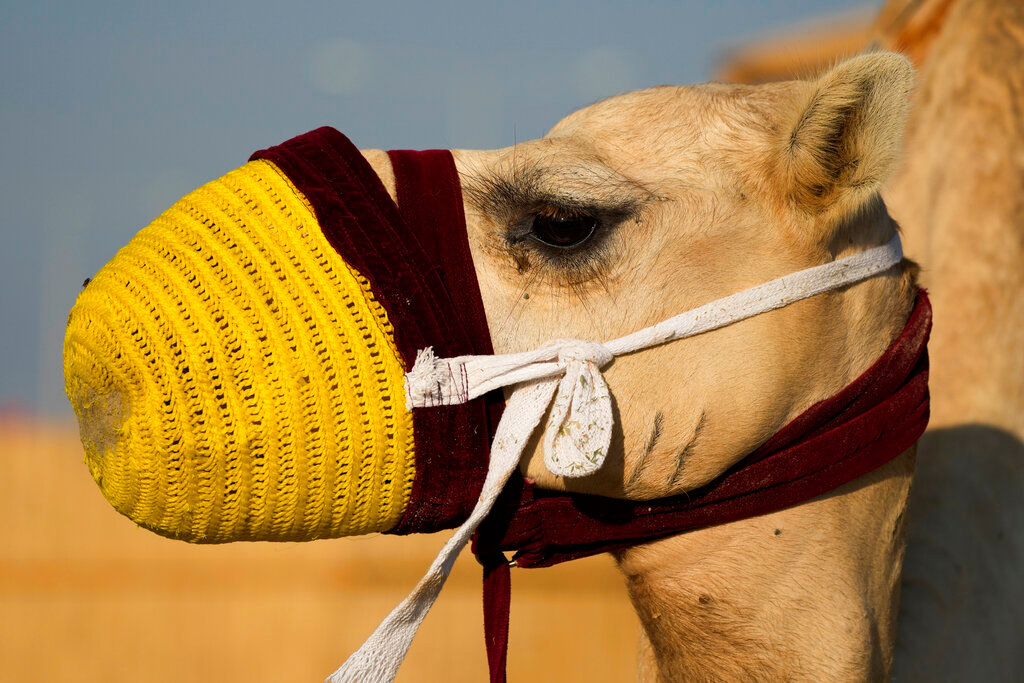 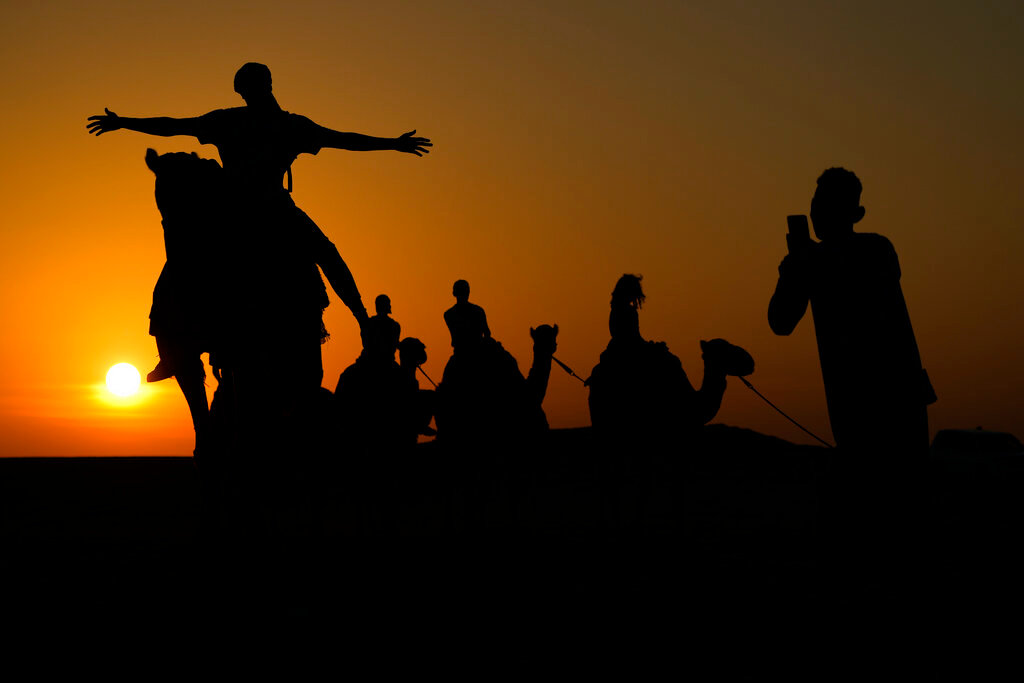 MESAIEED, Qatar (AP) — Shaheen stretched out on the sand and closed his eyes, but there was little time to rest for the camel. World Cup fans coming in droves to the desert outside Doha were ready for their perfect Instagram moment: riding a camel on the rolling dunes.

As Qatar welcomes more than a million fans for the monthlong World Cup, even its camels are working overtime. Visitors in numbers the tiny emirate has never before seen are rushing to finish a bucket list of Gulf tourist experiences between games: ride on a camel’s back, take pictures with falcons and wander through the alleyways of traditional markets.

On a recent Friday afternoon, hundreds of visitors in soccer uniforms or draped in flags waited for their turn to mount the humpbacked animals. Camels that did not rise were forced up by their handlers. Nearby, a group of men from Mexico dressed in white Qatari thobes and headdresses took selfies.

“It’s really an amazing feeling because you feel so tall,” 28-year-old Juan Gaul said after his ride. The Argentine fan was visiting Qatar for a week from Australia.

Cashing in on the opportunity are the animals’ handlers who, thanks to the World Cup, are making several times more than they normally would.

Al Ali came to Qatar 15 years ago but has worked with camels since he was a child. On an average weekday before the World Cup, Al Ali said his company would offer around 20 rides per day and 50 on weekends. Since the World Cup started, Al Ali and the men he works with are providing 500 rides in the morning and another 500 in the evening. The company went from having 15 camels to 60, he said.

“Tour guides want to move things fast,” Al Ali said, “so they add pressure on us.”

As crowds formed around them, many camels sat statue-like with cloth muzzles covering their mouths and bright saddles on their bodies. The smell of dung filled the air.

Like other Gulf cultures, camels once provided Qataris with a vital form of transport and helped in the exploration and development of trade routes. Today, the ungulates figure into cultural pastimes: camel racing is a popular sport that takes place on old-school tracks outside the city.

Al Ali said he knows when an animal is tired — usually if it refuses to get up or sits back down after rising to its feet. He can identify each camel by its facial features.

“I am a Bedouin. I come from a family of Bedouins who care for camels. I grew up loving them,” Al Ali said.

But the sudden rise in tourists means there’s less time to rest between rides, he said. A short ride lasts just 10 minutes while longer ones run 20 to 30 minutes long.

Normally, Al Ali said a camel can rest after five rides. “Now, people are saying we can’t wait ... because they have other plans they need to go to in the middle of the desert," he said.

Since the World Cup started, the animals are taken for 15 to 20 — sometimes even 40 rides — without a break.

Al Ali's day starts around 4:30 a.m., when he feeds the animals and gets them ready for customers. Some tourists have been arriving at dawn, he said, hoping to get the perfect sunrise shot, “so we have to work with them and take photos for them."

From midday until 2 p.m, both handlers and camels rest, he said. “Then we start getting ready for the afternoon battle."

But not every visitor has been taken by the experience.

Pablo Corigliano, a 47-year-old real estate agent from Buenos Aires, said he was hoping for something more authentic. The excursions start on a stretch of desert by the side of a highway, not far from the industrial city of Mesaieed and its vast oil refineries.

“I was expecting something more wild,” said Corigliano. “I thought I would be crossing the desert, but when I arrived, I saw a typical tourist point.”

Soon after, Corigliano and a group of friends looked for a dune buggy to race into the desert.