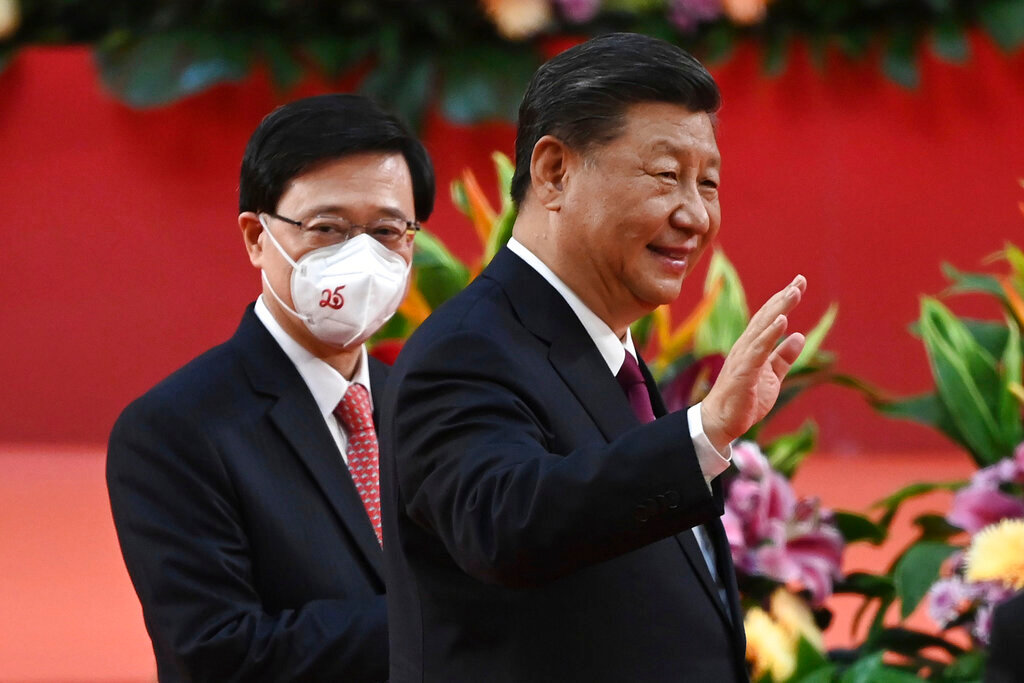 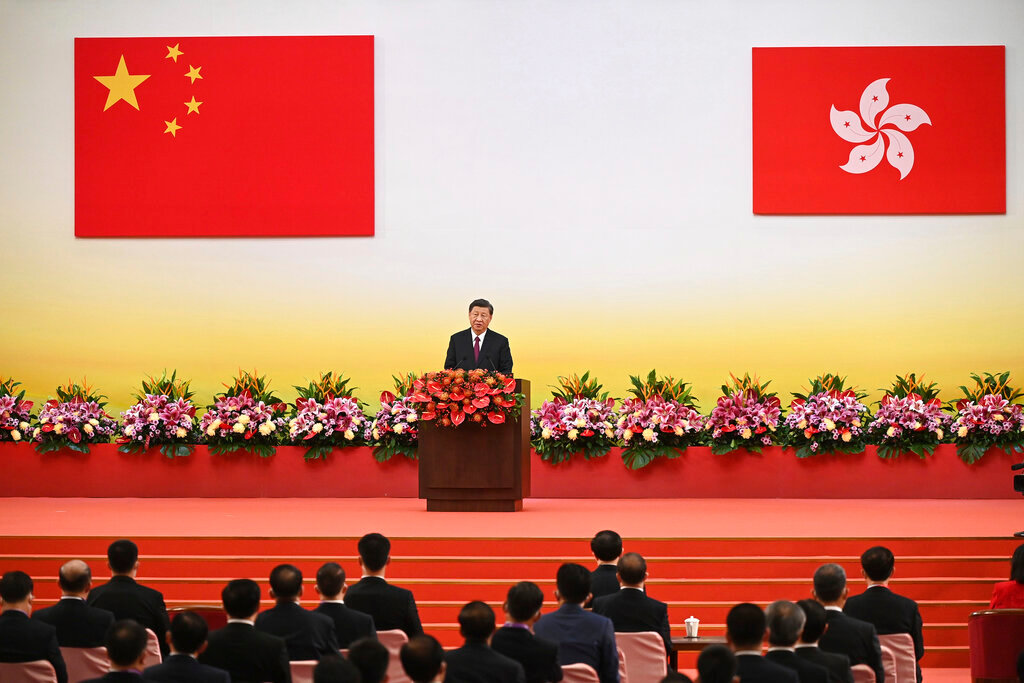 China's President Xi Jinping gives a speech following a swearing-in ceremony to inaugurate the city's new government in Hong Kong Friday, July 1, 2022, on the 25th anniversary of the city's handover from Britain to China. (Selim Chtayti/Pool Photo via AP) 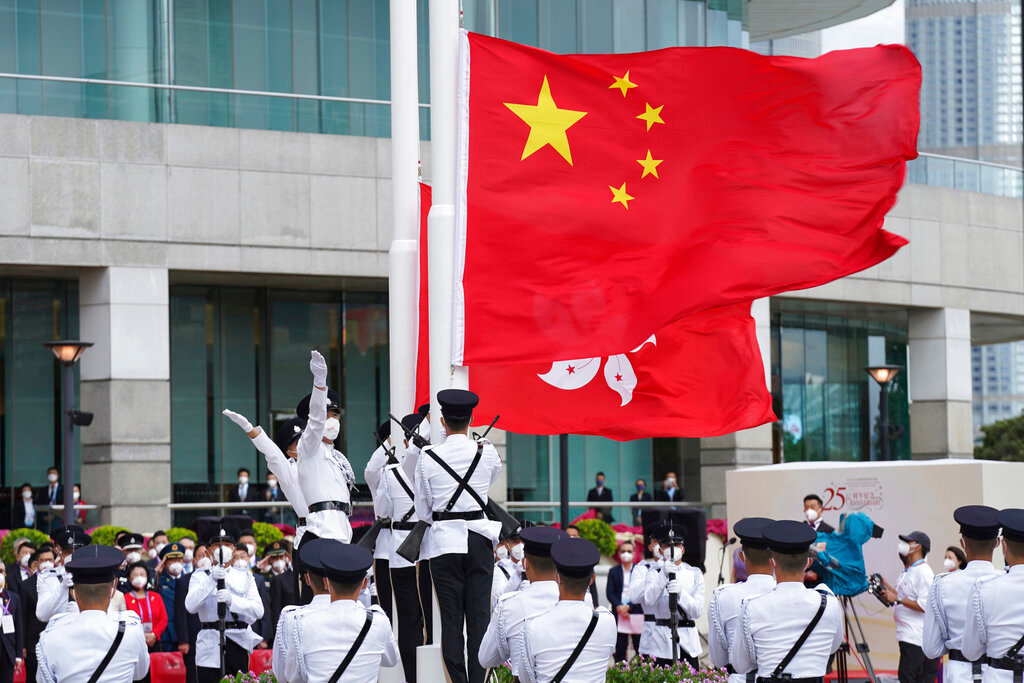 HONG KONG (AP) — China’s leader Xi Jinping marked the 25th anniversary of Hong Kong’s return with a speech Friday that emphasized Beijing’s control over the former British colony under its vision of “one country, two systems” – countering criticism that the political and civic freedoms promised for the next quarter-century have been largely erased under Chinese rule.

Xi praised the city for overcoming “violent social unrest” – a reference to massive pro-democracy protests in 2019 that were followed by a Beijing-driven crackdown that has snuffed out dissent and shut down independent media, aligning Hong Kong more closely with stricter controls under China's ruling Communist Party.

The shift shocked many in the city of 7.4 million people that Britain returned to China in 1997, after running it as a colony for more than a century. As part of the agreement, China agreed to allow Hong Kong to have its own government and legal system for 50 years.

In the ensuing years, Hong Kong activists pushed back against Chinese efforts to curtail freedoms and even made demands for fully democratic elections, drawing out hundreds of thousands of people for marches in the streets.

Under Xi, that pushback has been silenced. For years, the anniversary of the July 1 handover was marked by an official ceremony in the morning and a protest march in the afternoon. Now, protesters have been cowed into silence in what the Communist Party hails as restoring stability to the city.

Xi said that Beijing has “comprehensive jurisdiction” over Hong Kong, and that Hong Kong should respect Chinese leadership, even as Beijing allows regions like Hong Kong and neighboring Macao to maintain their capitalist system and a degree of autonomy.

“After the return to the motherland, Hong Kong has overcome all kinds of challenges and moved forwards steadily,” Xi said. “Regardless of whether it was the international financial crisis, the coronavirus pandemic or violent social unrest, nothing has stopped Hong Kong’s progress.”

His speech represented the culmination of what China scholar Jeff Wasserstrom has described as a push and pull between two competing visions of “one country, two systems."

Many in Hong Kong “fought for a more robust understanding of the two systems, to have an idea that there’s a very different lifestyle there," said Wasserstrom, a professor at the University of California, Irvine, and author of “Vigil: Hong Kong on the Brink.”

That view, at least for now, has lost out to the narrower one of the Communist Party, which is mainly interested in maintaining the economic advantages of Hong Kong's capitalist system, he said.

Hong Kong resident Grace Chan saw little reason to celebrate on Friday. “It’s been very difficult for Hong Kong people in recent years,” she said. "I just wanted to relax today and not to surround myself in a negative atmosphere for too long.”

Since the 2019 protests, authorities have used a sweeping national security law to arrest scores of activists, media figures and democracy supporters. They introduced a more patriotic curriculum in schools and revamped election laws to keep opposition politicians who are deemed not patriotic enough out of the city’s legislature.

In its view, China’s Communist Party has restored stability to a city that was wracked with demonstrations seen as a direct challenge to its rule. For Western democracies, Xi has undermined the freedoms and way of life that had distinguished the city from mainland China and made it into a global finance and trade hub.

U.S. National Security Council spokeswoman Adrienne Watson said in a statement that China’s policies toward Hong Kong, including the national security law, have “shaken the institutions, rules, and systems that had been the basis of international confidence in Hong Kong.”

British Foreign Secretary Liz Truss said: “We have seen a steady erosion of political and civil rights since the imposition of the National Security Law on June 30, 2020. Authorities have stifled opposition, criminalized dissent and driven out anyone who can speak truth to power.”

Xi warned that there would be no tolerance for foreign interference or traitors meddling in Hong Kong’s affairs. He said that “safeguarding national sovereignty, security and development interests” is of the highest priority.

“Nobody in any country or region in the world will allow foreign countries or even traitorous forces and figures to seize power,” he said, adding that only by having patriots governing Hong Kong can it ensure long-term stability.

He said that that “one country, two systems” was still a good system that "must be maintained for a long time.”

In the remote village of Tai O, where homes are built on stilts, fisherman Ng Koon-yau is fine with Beijing being in charge.

“Hong Kong is part of China, and I’ve never thought of moving anywhere else,” said Ng, who came from China’s neighboring Guangdong province in the 1950s. “I hope that China will make Hong Kong a better place, where everyone can prosper."

Xi also stressed the importance of caring for the youth of Hong Kong. Many of the protesters in pro-democracy movements in 2014 and 2019 were students, many disillusioned by not only the loss of promised political freedoms but also an increasingly competitive job market and rising housing costs.

“It is necessary to help the majority of young people solve the difficulties they face in their studies, employment, and in entrepreneurship and property ownership,” he said. “There must be more opportunities created for them to grow and become talents.”

Xi's trip to Hong Kong was his first outside of mainland China since the COVID-19 pandemic took hold in January 2020. He had last visited Hong Kong in 2017 for the 20th anniversary of the handover.

Thousands of guests were required to take daily coronavirus tests and check into quarantine hotels ahead of their attendance at events with Xi.

Xi officiated at the swearing-in of Hong Kong's new leader John Lee, a former security chief who oversaw the crackdown on dissent.

“The next five years will be a crucial time for Hong Kong to advance from governance to prosperity," Lee said.

He has previously indicated plans to follow through on a long unfulfilled requirement for the city to enact its own laws to protect the Chinese government against acts that threaten national security. An earlier initiative was abandoned after large protests in 2003.