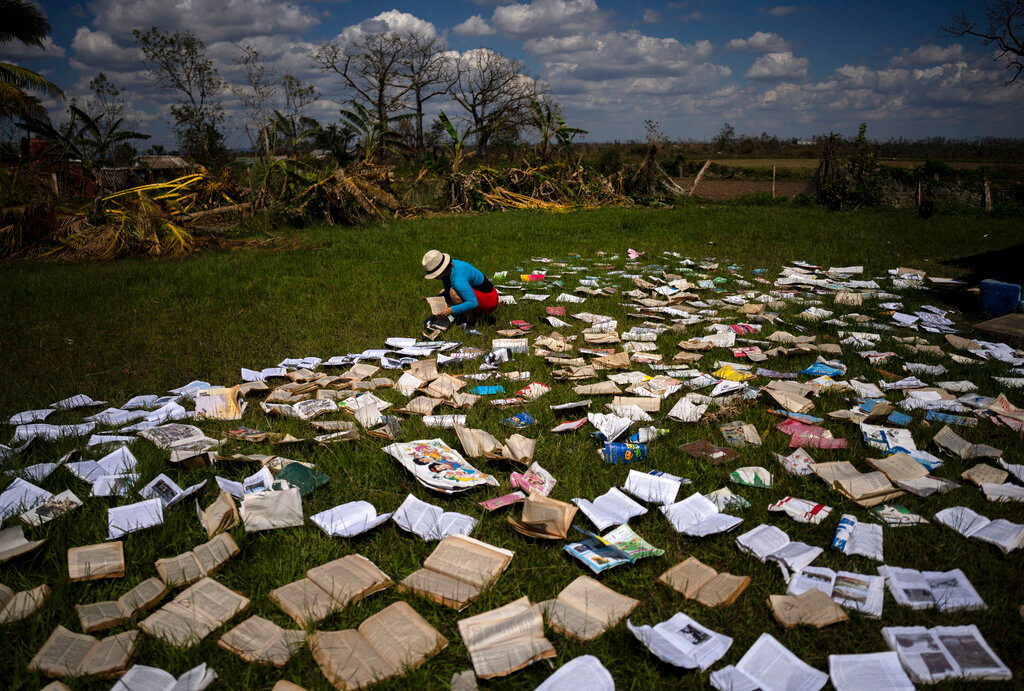 A teacher dries out books at a school that was heavily damaged by Hurricane Ian in La Coloma, in the province of Pinar del Rio, Cuba, Wednesday, Oct. 5, 2022. (AP Photo/Ramon Espinosa) 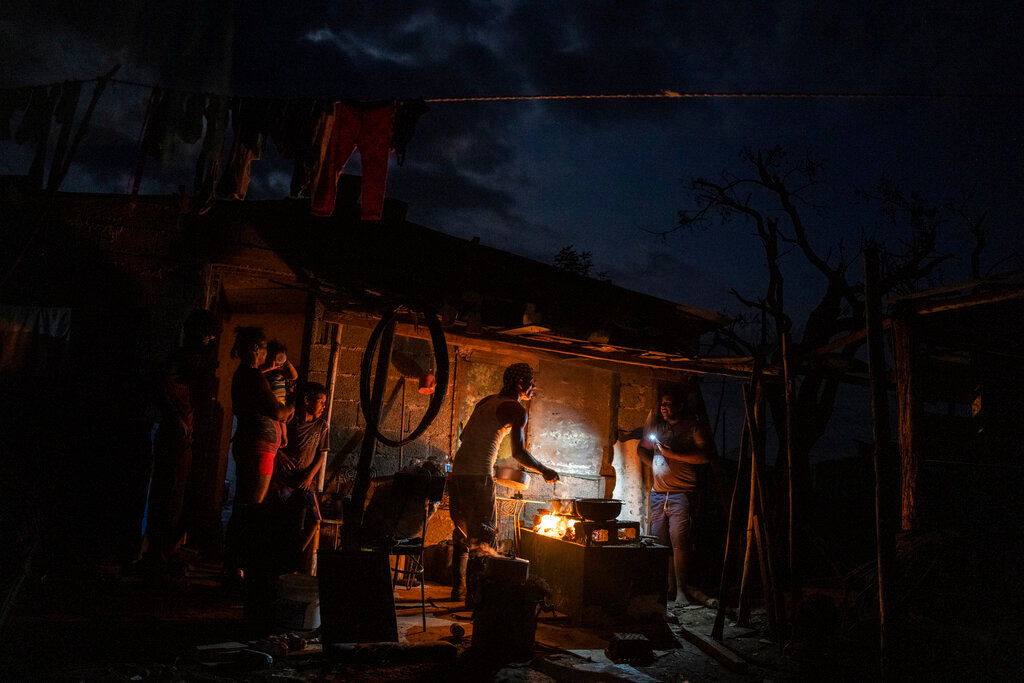 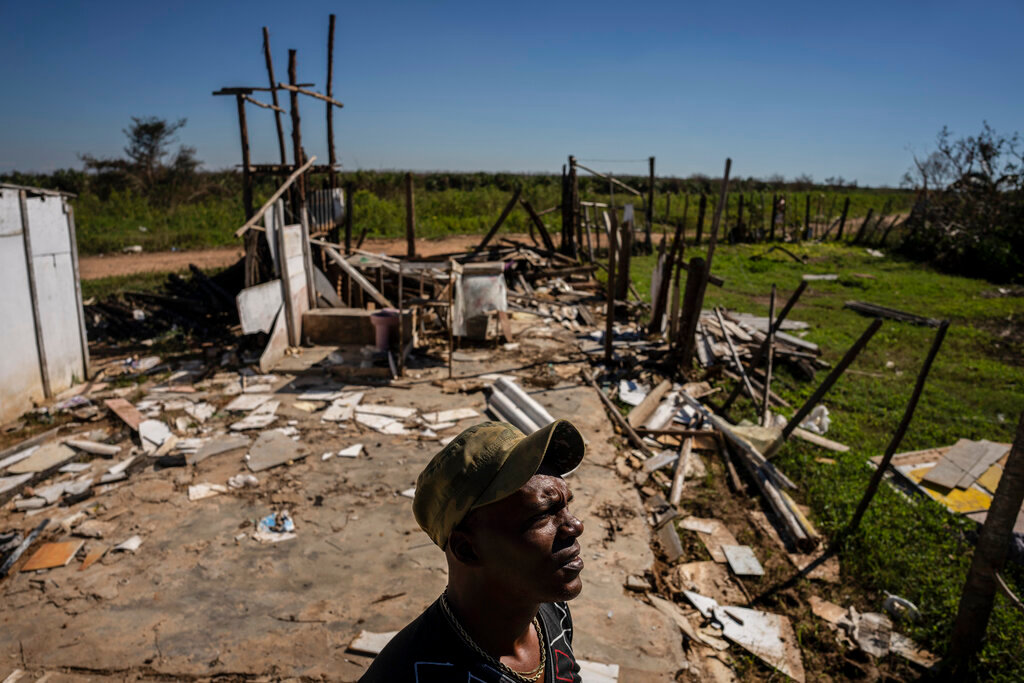 Javier Diaz poses for a photo next to his home that was destroyed by Hurricane Ian in La Coloma, in Pinar del Rio province, Cuba, Wednesday, Oct. 5, 2022. (AP Photo/Ramon Espinosa)
Previous Next
Posted Friday, October 7, 2022 9:42 am
By ANDREA RODRÍGUEZ, Associated Press

Ten days after the storm left still unquantified devastation across western Cuba, and knocked out the power grid nationwide, many Cubans are still without electricity, water or basic goods. The destruction from Ian has piled onto the hardship of people who had already been suffering through scarcity and shortages in recent years.

“The ceiling was damaged, the mattress got wet,” said homemaker Yaneysi Polier as she stirred a pot with pressed ham and lard cooking over coals on the floor of the patio of her house. Her still-wet mattress was in the sun drying.

“The refrigerator was found in the mud by our neighbor’s house. We set up something to sleep on. The water was up to our chests,” she said.

Only 15% of western Pinar del Río province has electricity and no one has their power back in La Coloma, a town of some 7,000 people 125 miles southwest of Havana.

Repeated blackouts on Cuba’s already fragile electric grid were among the causes of the island’s largest social protests in decades in July 2021. Thousands of people, weary of power failures and shortages of goods exacerbated by the pandemic and U.S. sanctions, turned out in cities across the island to vent their anger and some also lashed out at the government. Hundreds were arrested and prosecuted, prompting harsh criticism of the administration of President Miguel Diaz-Canel.

The recent arrival of Ian caused three deaths and in Pinar del Rio province damaged 63,000 homes, thousands of which were destroyed. Cuba had a deficit of about 800,000 houses even before the hurricane struck.

La Coloma is home to the state Industrial Fishing Combine, which processes 40% of the lobster caught on the island, most of which is exported. It also processes bonito and snapper fish, and residents say it was high season when Ian struck. Twelve fishing boats were damaged, some sunk.

Maribel Rodríguez is staying in an emergency shelter in a primary school along with her pregnant daughter-in-law, who is about to give birth. She said they will name the baby Ian.

“This hurricane took everything from me,” Rodríguez said. “My house was not good, but it had many things of value — a refrigerator, a television, living room furniture, beds and kitchenware — and I had earned those with my sacrifice. This is very painful.”

Both Rodríguez and her son work in the fishing plant complex and they worry about it shutting down in the middle of lobster season.

“Here, the only place to work is the combine and I have been there for many years. You have to make a living,” she said.

Ian hit Cuba with winds of more than 125 mph on Sept. 27. It not only affected Pinar de Rio, but also the provinces of Artemisa, Mayabeque and Havana More than 30,000 people were evacuated ahead of the hurricane’s arrival.

Besides the damage to houses, the power infrastructure and industry, the Ministry of Agriculture estimated that Ian damaged more than 21,000 acres of crops in the three provinces, especially bananas, cassava, sweet potatoes, corn, rice and tomatoes.

Cuba’s gross domestic product fell 11% in 2020 amid the pandemic and only rose 2% in 2021. Tourism has not recovered from the COVID-19 travel paralysis and U.S. sanctions pressing for political change in the island continue to squeeze its economy. Authorities expect the damage from Ian to further batter the economy.

Along with La Coloma, one of the hardest hit municipalities was nearby San Luis, a region that produces some of the best tobacco in the world.

Tobacco grower Hiroshi Robaina, looking at his devastated drying houses and seedbeds, thinks that this year he will have to plant his fields with beans.

“I doubt very much there can be any tobacco production this year because there is no infrastructure,” he said. “The damage to the nurseries was monstrous.”

Robaina, whose plantation is so important it has its own brand, said, “A miracle has to happen.”

He said at least 100 small tobacco farmers suffered losses of 100% and called for the government to subsidize reconstruction. Pinar del Río contributes 80% of the tobacco that Cuba produces.

“Tobacco, although it is not something that is going to save the Cuban economy, is an export item,” said Ricardo Torres, a Cuban economist and researcher at the Center for Latin American Studies at American University in Washington. “In Cuba, with what little there is, what is lost is very bad news.”

“This is a country that at this time does not have resources,” Torres said.