It's been a long road back to normal for Savannah resident Rosalind Seymour, right, as she walks toward her home with Harold Baynes, Dalton Disaster Relief director for Unit 8R. Georgia Baptist Disaster Relief teams had a strong ministry presence last October when Hurricane Matthew hit coastal Georgia with massive flooding. JOE WESTBURY/Index

As Hurricane Irma sets its sight on hammering its way through the heart of Florida and South Georgia this weekend, Georgia Baptists are hunkering down for a few days of tropical winds and flooding. Projections are for the weakened storm to be directly over Macon and Atlanta around 2 a.m. Tuesday A thus-far quiet year for Disaster Relief ministry has taken a sudden turn in the past 10 days with the emergence of two Category 5 hurricanes nearly back to back. Harvey slammed into coastal Texas on Aug. 25, flooding Houston and the environs and causing a mass exodus. Now Hurricane Irma is threatening the Southeast as the most powerful tropical Atlantic storm on record. Gov. Deal has issued a mandatory evacuation of Savannah and all coastal counties. On Thursday the Georgia Baptist Mission Board cancelled its Tuesday (Sept. 12) Executive Committee meeting where the 2018 budget would have been introduced. As of midnight Thursday (Sept. 7), Georgia Department of Transportation cameras showed inbound traffic on I-75 North slowing to a crawl through Valdosta as Floridians evacuated the state. Various news media were reporting that hotels as far north as Atlanta were nearly sold out. 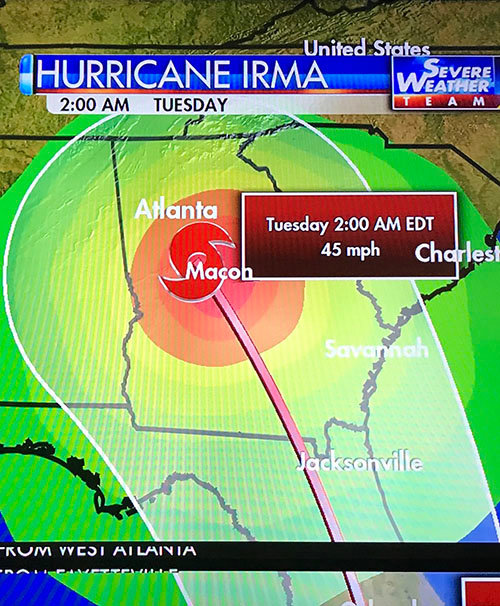 Atlanta television station Channel 2 is predicting Hurricane Irma, downgraded to about 45 miles per hour, will pass through Macon and Atlanta early Tuesday morning. JOE WESTBURY/Index
And with that background, this year’s blessedly lean Disaster Relief numbers will quickly catch up to, or easily surpass, the ministry that was delivered in 2016.

In the first eight months of this year – through August 31 – 121 gospel presentations were made that resulted in 10 professions of faith, nearly as many as the 13 who came to faith in all of 2016. Volunteers have served 949 volunteer days through which 306 assessments were completed to determine the ministry response, whether that included assigning chainsaw crews, dispatching feeding stations, or placing tarps on roofs. Many times in a disaster the power grid has been severely crippled or, in some cases, destroyed. That makes food preparation necessary to give survivors as well as first responders the necessary nutrition to deal with recovery efforts. To that end, 972 meals were prepared by Georgia Baptist volunteers from some of the state’s mobile kitchens. Once fortified with the energy from a hearty meal, the real work begins. Thus far volunteers completed 17 mudout/tearout jobs, 144 chainsaw jobs, and placed tarps on 78 roofs. Three children were cared for through the mobile nursery. This important service provides time for parents or caregivers to deal with the paperwork to request government funding to rebuild their residences and to deal with the emotional setback of the disaster. They rest assured that their children are being fed and looked after in a safe, playful environment. Chaplains made 538 contacts, comforting survivors as well as first responders from other agencies dealing with the sometimes life-changing tragedy. A total of 674 ministry contacts were also provided while 27 decisions other than professions of faith were recorded.

Aftermath of a hurricane

While the year is still young in services provided – fall hurricanes can wreak havoc for the next several months ­– 2016 proved to be a very hard hit year. A total of 278 gospel presentations were made with 13 professions of faith. A total 2,700 volunteer days were recorded … 1,751 more than this year with only four months to go. A whopping 23,063 meals were served up, an increase of 22,091 from the 972  provided this year. 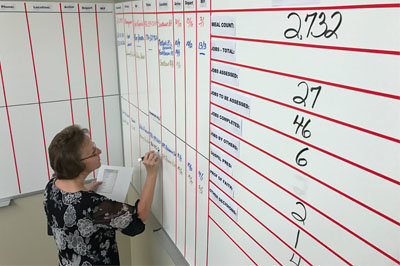 Georgia Baptist chainsaw crews were assigned to 235 chainsaw jobs while volunteers responded to 11 tearout/repair jobs. Two roofs were tarped. A total 921 contacts were made by chaplains and 32 decisions other than professions of faith were noted. In total, 1,152 ministry contacts were reported. Much of that end-of-the-year ministry occurred on October 7 as Hurricane Matthew pounded coastal Georgia barely five weeks before the annual convention meeting at Savannah’s Calvary Baptist Temple. Georgia Baptists are already donating online to the state's Disaster Relief fund and are assembling Buckets of Care for eventual distribution to affected residents, whether that be in Texas, Florida, or Georgia. See instructional video below. The next disaster relief training is set for Sept. 16 at New Providence Baptist Church in Forsyth with a registration (register here) deadline as of the end of today, Sept. 8. BUCKETS of CARE LONG FORM explainer VIDEO 2017 from Georgia Baptist Mission Board on Vimeo.