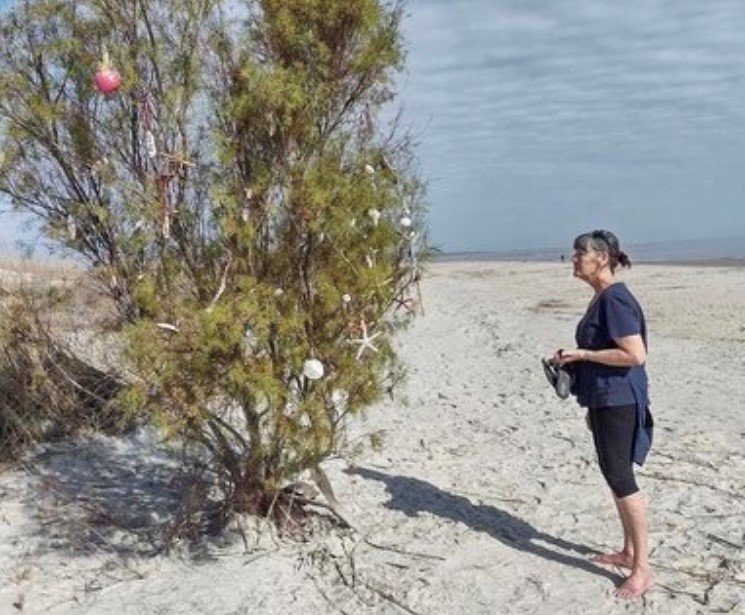 ST. SIMONS ISLAND, Ga. (AP) — When Ron Binkney and Lucky found a pretty seashell near a lone cedar tree while walking the beaches of St. Simons Island, the spirit of Christmas was still a distant afterthought.

But that pretty shell had a hole in it, perfect for hanging from a limb of the 8-foot-tall tree. As Binkney and his golden retriever continued their daily walks along the island’s East Beach, he made it a point to add additional pretty shells that caught his eye.

“Lucky and I decided to put on more seashells,” said Binkney, recalling early November when it started. “I would find the shells that had holes in them and add them to the tree.”

But Binkney had nothing to do with the starfish that appeared on the tree one day. Likewise, he did not hang the dog bone cutout with a pet’s name on it. And he certainly did not add the jingling bells or the handmade bamboo cross.

“We just began to notice other ornaments had been added,” Binkney said. “It was an assortment of things, homemade and store bought items alike.”

The additions continued. Suddenly, the cedar three growing where the beach meets the dune was beginning to look a lot like a Christmas tree just as the holiday season was getting into swing.

Most are homemade decorations, but some store bought Christmas ornaments have been added as well. There are also several ornaments of nature, including a garland of seashells strung together.

“It’s probably a hundred ornaments or more on there by now,” said Binkney, an English professor at Troy University in Brunswick. “It’s become a community project. Simple acts that generate caring and sharing. And it’s amazing to see the new additions every day.”

In fact, the holiday beach tree’s popularity is so widespread, it is even playing in Peoria.

“Every time I walk by here, I take another picture to send to friends back home in Peoria,” Nyla Wendle, a snowbird from Illinois, said Dec. 17. “They love it. More gets added all the time. We love that someone had the foresight to come and start decorating this tree.”

Binkney and his wife, Alex, live near the St. Simons Lighthouse. But he enjoys taking the golf cart up to the Sixth Street Beach Access, where Lucky can stretch his four legs in the field along the beaten path leading to the beach.

On recent trips, the two have met some of the other contributors to the beach tree’s adorned beauty. Grandparents and kids, islanders and tourists, retirees and twenty-somethings all have either added to the tree or stopped to admire its Christmas incarnation.

“The fun is in seeing what other people do,” he said. “The spontaneity of it is joyous. It’s out there in the open and it’s here for the community to enjoy.”

This is Wendle and husband Mike’s first winter on the Georgia coast. But the quirky mirth displayed in the decorated beach tree embodies the sense of community that has endeared them to the Golden Isles.

“I’ve seen different people come out and hang ornaments,” she said. “All kinds of people. So it’s not just the same people. And every day it’s something different. It’s just a wonderful present. It’s what Christmas is about. There’s nothing commercial about it. Just people coming together to enjoy.”