Georgia Baptist Convention President Thomas Hammond challenges messengers during his Monday evening report. JOE WESTBURY/Index
SAVANNAH – On Monday evening of the Georgia Baptist Convention Thomas Hammond gave the president’s address and it was obvious he was a man on a mission. His message was clear, powerful, challenging, and accented with relevant videos, the appearance of a war hero, and the singing of a young cowgirl that brought the house down. Throughout the president’s sermon/presentation the more than 1,100 messengers and guests alternately laughed in hilarity, wept in joy, shouted in approval, and stood in gratitude for what God did in a memorable opening session of the Convention. Hammond’s text was Acts 3:1-10 and his title “Making a Difference – Together." He related the story of Peter and John going to the Temple in Jerusalem at the hour of prayer. They saw a man who had been lame from birth. So, the president’s first point was (1) “See the Need”.

See the need, but get involved

To underscore the need in Georgia, Hammond declared, “There are seven million lost people in Georgia. Divorce rates are rising. Drug addiction is rampant. Pornography is riddling our society with lewdness and obscenity. The number of student dropouts is alarming. The sex trafficking is frightening. The fact that there are 15,000 children in foster care in our state is disturbing. We must see the needs all around us.” Then Hammond focused on verse 4 of his text where Peter said to the lame man, “Look on us.” He emphasized how Georgia Baptists need to get involved and stated, “It is not enough to see the needs. We must get involved.” He talked about his church, First Baptist Church in Alpharetta, getting involved with a community of Hispanic families less than two blocks from the church. The community of 17 families was almost hidden from view, but the church has begun to minister to those families and God is beginning to work among those almost -orgotten people in a remarkable way.

The GBC president rolled out his vision for Georgia Baptist to blitz the state with loving visits to a million homes before Easter to get people to church on Easter Sunday. He explained that only two out of every 100 church members invite someone to church in the course of a year. He then explained that statistics show that 82 percent of people said they would likely attend church if they were invited.  Hammond explained, “I was interim pastor of a church several years ago and the church averaged about 350 in worship on Sundays, but I challenged the people to visit 2,200 homes before Easter Sunday, and they did. If the people were not at home they left a brochure about the church and an invitation for them to come on Easter Sunday." He said on Easter the church had 800 first time visitors and eleven of them were saved on that special day. Then Hammond urged his audience to “step out on faith." He cited verses 5-10 of his text, indicating that Peter stepped out on faith when he told the lame man to “rise up and walk.” At this point Hammond interviewed Alan Morris, North Central Area missionary, about the Cowboy Church in Jerusalem, GA. Morris admitted that he saw a need for a church to reach out to ranchers and cowboys, saw that a woman, Rebecca Hampton, was willing to help him get the church started. Along with the church, Alan and His wife Rebecca started a school for children who were disadvantaged and came from troubled backgrounds.

When children are given a chance 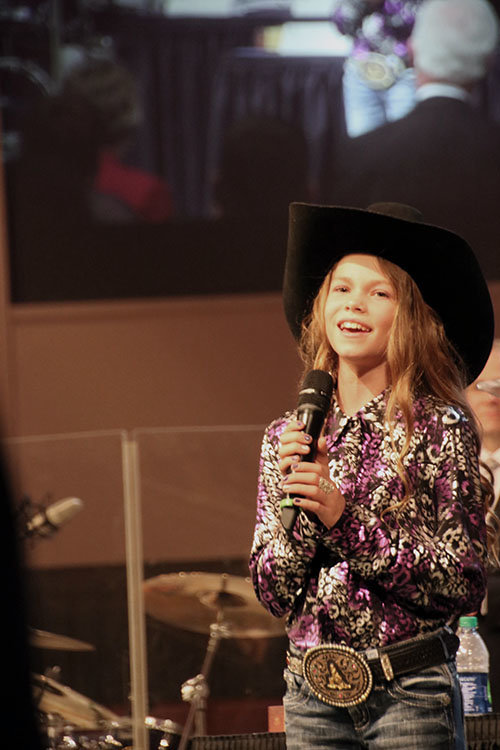 Twelve-year-old Elizabeth Bailey brought the crowd to their feet with her rendition of "How Can it Be." Bailey is a student at at the Double H Ranch, which is part of the Cowboy Church in Jerusalem in northwest Georgia. SCOTT BARKLEY/Index
Morris testified as to how the students were learning manners, learning to show respect, and improving in their studies, some excelling to the point of advancing two to three years ahead in a year’s time. One seventh grader, Elizabeth Bailey, was called to the front of the church and presented as a young lady who was part of the school and had considerable talent as a singer. Hammond asked Elizabeth to sing. She sang “How Can It Be” by popular Christian singer Lauren Daigle (see below). God spoke through Elizabeth in a remarkable way to those present.

You plead my cause You right my wrongs You break my chains You overcome You gave Your life To give me mine You say that I am free How can it be, Yeah How can it be

Hammond indicated that Elizabeth had stepped out in faith to sing for the large audience and those should follow her example and exercise faith as they venture out in service.

For his final point, Hammond said, “Don’t go it alone” and pointed out that Peter and John went to the temple together. He then introduced Jeff Struecker, former U.S. Army Ranger and current lead pastor at Calvary Baptist Church in Columbus. 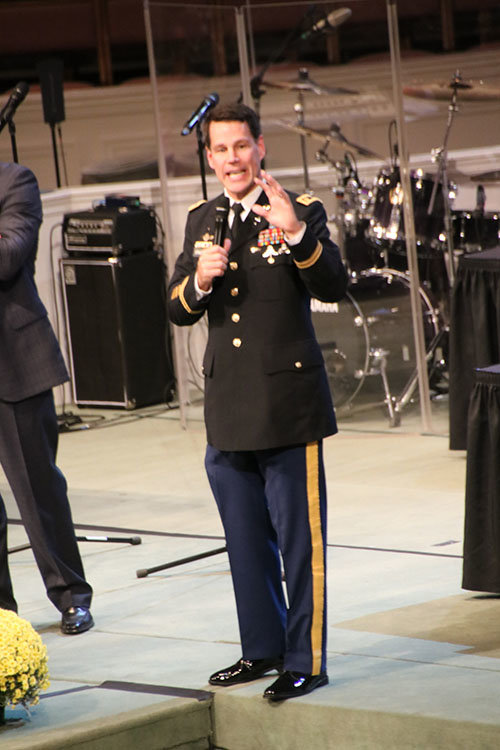 Jeff Struecker, pastor of Calvary Baptist Church in Columbus and Army Ranger who was part of the "Black Hawk Down" operation in Somalia, speaks with GBC president Thomas Hammond on the importance of teamwork within a unit. SCOTT BARKLEY/Index
Struecker came out in full U.S. Army dress uniform to a standing ovation. In the 1993 Battle of Mogadishu, Somalia, Struecker was a 24-year-old Sergeant and squad leader assigned to Task Force Ranger as a part of the 75th Ranger Regiment. He led the three-vehicle convoy that returned, through intense fire, wounded Ranger Pvt. Todd Blackburn to base. His exploits in this effort are noted in the book and movie Black Hawk Down. Hammond interviewed Struecker, who stated, “The U.S. military is the biggest organization in the world, employs more people than any corporation in the world, and the Pentagon is the largest office building in the world. Furthermore, the budget of the U.S. military is bigger than most world economics." The U.S. Army hero continued, “There has to be a common vision, a common objective, and a common enemy to fight. The smallest maneuver unit in the military is a squad. It consists of two fire teams and a squad leader. That is as small as it gets – never does one soldier, sailor, airman, or marine fight on the battlefield by himself or herself. It is considered suicide to go on to war without your teammates. In fact, the last guy who did it was Bowe Bergdhal and we know what happened to him.”

Pastors in need of pastors

Hammond took advantage of Struecker’s comments to illustrate the importance of pastors developing a prayer partnership. He said, “Half of the pastors feel unable to meet the demands of the job. Seventy percent of the pastors constantly fight depression. Another 70 percent say they have a lower self-image now than when they first started, and 70 percent also say they do not have someone they consider a close friend.” The GBC president then urged the pastors to sign a commitment card indicating a willingness to be paired with another pastor in a prayer network. Hammond’s sermon was pointed, purposeful, passionate, and powerful. Hopefully, the impact of the sermon and the challenge issued will produce fruit for the Kingdom for years to come. Elizabeth Bailey - How Can It Be from Georgia Baptist Mission Board on Vimeo.