NEW YORK CITY — Two airliners, American Airlines Flight 11 and United Airlines Flight 175, crashed into the North and South towers of the World Trade Center complex in NYC on Sept. 11, 2001. Most Americans remember where they were and what they were doing on that fateful day when 2,996 people were killed and more than 6,000 others were injured.

New City Church in Long Island City, Queens, New York was not in existence on that infamous day 15 years ago this Sunday. However, there are people in New City Church who will never forget that day, because it has been indelibly seared in their memory forever.

Patrick Thompson, who has deep roots in Georgia, planted New City Church in 2013 with the assistance of several Georgia Baptist churches. He recently stated, “On Sunday, September 11, our church will have a time of remembrance and prayer for our city and those impacted by the tragedy of 9/11.

“One of our church members, Chase Muratore, who is a native New Yorker, will lead this time for us. He and his father have an office downtown and during 2001 the office was located very close to Ground Zero. His father witnessed the attacks and collapse of the buildings.

“Chase will share about the impact that one day had on this city, his life and how Christ has helped him take steps to overcome the fear and insecurity that he has experienced since those sudden and horrific attacks.” 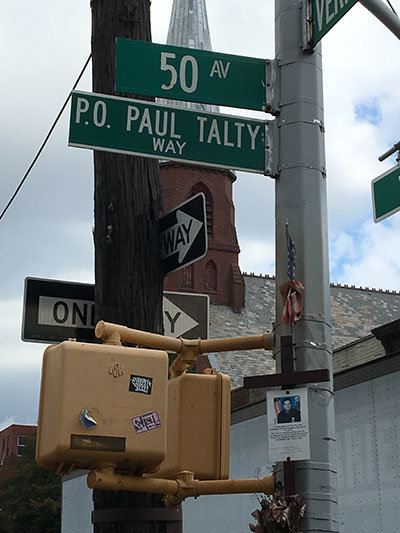 The police precinct for New City Church renamed a local street for Officer Paul Talty, who died in the Sept. 11 attacks. Such remembrances have become a part of the city's fabric, explains Pastor Patrick Thompson. NCC/Special

Thompson added, “Our neighborhood also takes time to focus on remembering the impact of that day. Last year on 9/11 we had a community concert in our park and I was invited to lead those in attendance in a time of prayer and remembrance. It was an amazing opportunity to point people to Christ and the hope that we can find in Him no matter what circumstances we may face.”

Having lived with the people in New York City and adapting to the culture of the “Big Apple,” Patrick and his wife Katie have gotten to know the hearts of many of the people. He has observed, “Even 15 years after the 9/11 attacks there are lingering impacts that affect the lives of New Yorkers on a daily basis. Every day as I exit the subway in my neighborhood I do so at the corner renamed for Officer Paul Talty, a rescue officer that perished inside the World Trade Center.

“Our local police precinct keeps an active memorial to Officer Talty outside of their building; it has been there for almost 15 years. This type of memorial is not uncommon around the city. Almost anywhere you go, if you know what to look for, you can see small memorials and reminders of the people that were killed by the terrorists’ attacks.” 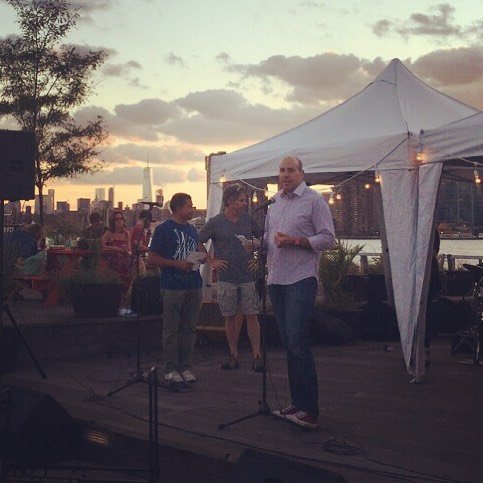 Patrick Thompson speaks at a previous ceremony marking the anniversary of the 9/11 attacks. Members of New City Church personally felt the horror of that day in 2001 and are reminded of the heroism displayed through memorials set up throughout the city. NCC/Special

On this coming Lord’s Day many churches will be commemorating the attacks on the World Trade Center in New York City and the Pentagon in Washington, D.C. with special worship services and seasons of prayer.

The New City pastor explained, “Each year on 9/11, survivors of the World Trade Center attack, family members of victims, elected officials, and city leaders gather at Ground Zero to observe a period of silence and listen as the names of every victim lost that day are read publicly. The memorial service will begin at 8:45 a.m., the time the first plane crashed into the North Tower of the WTC. It is a very somber and sobering experience.

“All over the city conversations grow quiet as the names are played over the television sets and radios in diners, coffee shops, and offices all around the city. As sad as these moments are, you can almost see the resolve of every New Yorker to overcome the impact of these attacks renewed as each name is read.

“While New Yorkers may mourn the loss of their brothers and sisters on that day, it also serves as a reminder of the incredible spirit of unity, courage, and selflessness that was demonstrated by so many during and after the attacks. No longer is 9/11 in NYC as much of a sad day as it is a day of remembrance, renewal and resolve.” 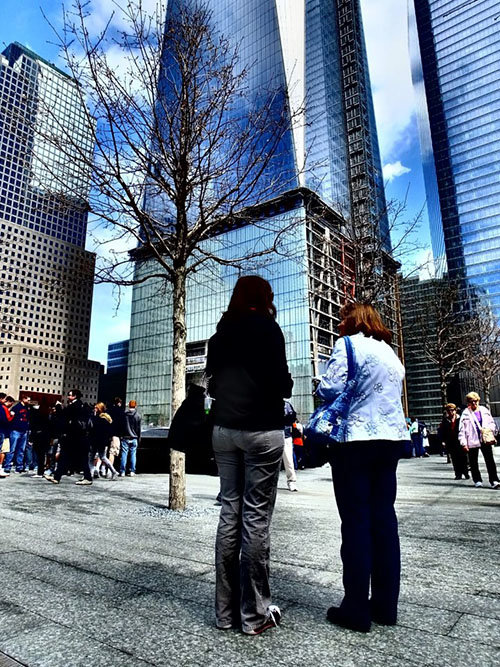 New City Church is a growing congregation and impacting many lives for Christ. Among the reasons for the success of the church is that Patrick and Katie Thompson understand the culture of the city and empathize with the people and the challenges they face daily.

“Today, people in NYC would tell you we are stronger than ever,” Thompson declared. “While the attacks of 9/11 had a devastating impact on the way this city lives and breathes, the recovery has actually made us stronger. The pride of seeing the 9/11 Memorial and Museum completed, the excitement of seeing the new One World Trade Center building completed, the growth of the new business and residential buildings in and around Ground Zero are evidences that while the attack hurt us, it did not defeat us.”

Thompson revealed something that may not only be true of New Yorkers, but of every American when he said, “There is always one looming thought that usually comes up anytime 9/11 is discussed. The thought or question is: ‘When will the next attack come? New Yorkers know they don’t just live on a target; they live at the center of the bull’s eye on that target.

“Yet, almost unbelievably, this reality doesn’t cause New Yorkers to live in fear, but instead to embrace the idea of being a shining example of justice, courage, perseverance, liberty, and freedom for all of our fellow Americans.” 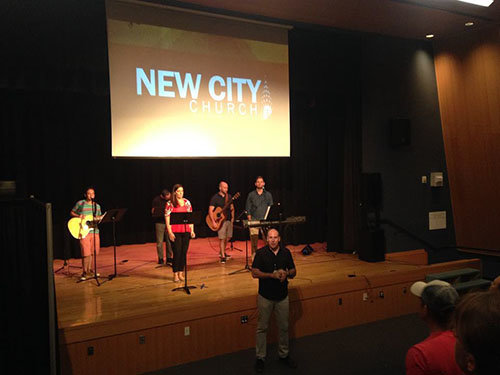 While the New City Church pastor is aware of the moral courage and indomitable spirit of New Yorkers he is fervently praying and working to add that spiritual dimension that is so desperately needed.

Thompson explained, “Through the work of these teams we were able to have over 3,000 conversations with people about God, the Gospel, and the church. The mission teams had deep, meaningful encounters with people from multiplied faith, ethnic, and spiritual backgrounds. The teams prayed with hundreds of people about specific needs; and ten people surrendered their lives to Christ through these witnessing endeavors.

God is at work through New City Church. Pray for the Thompsons and this strategic ministry in New York City. For more information go to www.new-citychurch.com

What are your plans for worship on this Sunday? Remember what happened on Sept. 11, 2001 and pray for revival and renewal in America.