A well-kept secret that needs to be exposed 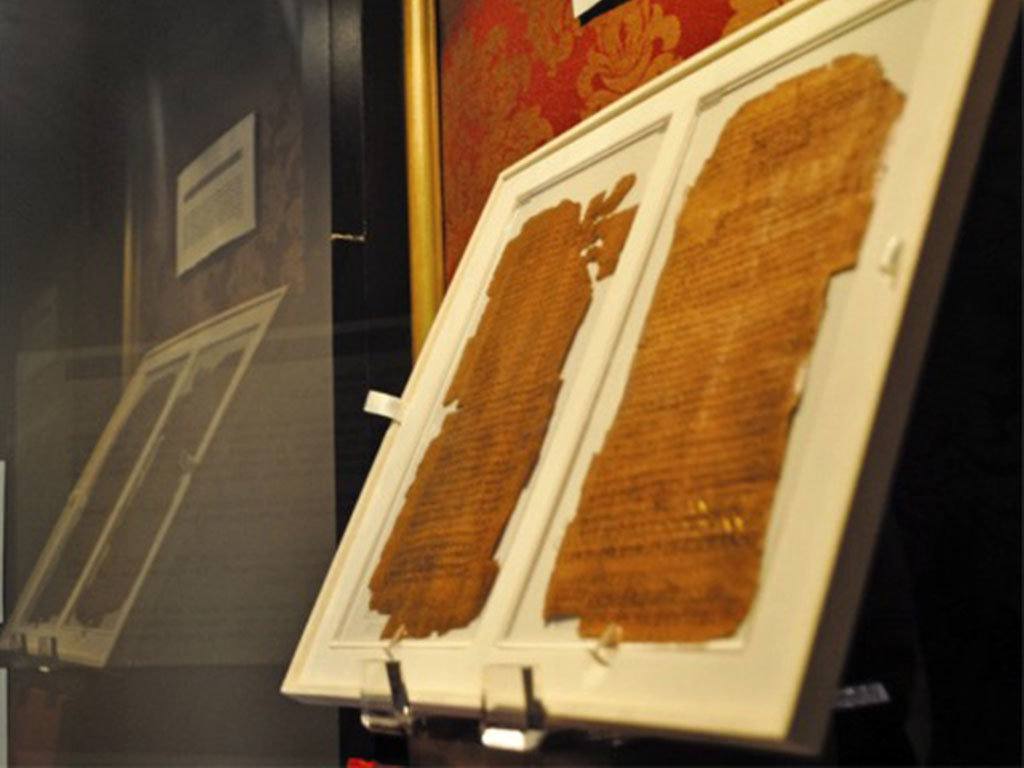 Posted Thursday, February 5, 2015 9:00 am
Gerald Harris
ATLANTA — Georgia Baptists with an appreciation for ancient biblical artifacts no longer need to travel to distant cities – or nations – to view such documents. Two scripture fragments known as the Bodmer Papyrus are on display at the Millennium Gate Museum at Atlantic Station. These copies of God’s Word date back to approximately 175 A.D. and are the oldest extant copy of parts of the Gospels of John and Luke. The early manuscripts contain the prologue of the Gospel of John (“In the beginning was the Word, and the Word was with God, and the Word was God.”) and the Lord’s Prayer as recorded in Luke 11:1-4. These portions of the Bible, written in Koine Greek, were discovered in Egypt’s Valley of the Kings in the Nile River Valley in the early 1950s. When scholars saw such remarkable agreement between the texts, they had to acknowledge that the fourth-century Codex Vaticanus, the oldest complete version of the Gospel, was indeed authentic. Atlanta businessman Frank J. Hanna III purchased the Bodmer Papyrus XIV and XV for an undisclosed sum of money. Through what Hanna called a convoluted, but remarkable series of events, he was able to privately purchase the papyrus before it was auctioned. He presented it to Pope Benedict XVI in January 2007 as a gift to the Vatican. In a video next to the display, Hanna focuses on the significance of the papyrus. He said that “there is one God, who came to earth one time. God gave us one prayer – and these pages contain the earliest copy of that prayer.” Hanna continued, saying, “This papyrus helps us authenticate our Christian Bible. This early text of the Word of God authenticates what we have always known to be true.” We live in a day of skepticism and doubt; and there are many who contend that the Bible is not true. However, there are ample examples of archaeological evidence, eyewitness accounts, literary consistency, prophetic consistency, expert scrutiny, and changed lives to quell the doubts of any sincere seeker of truth. Evidence giving legitimacy The manuscript evidence provides sufficient credence to the validity of God’s Word. There are way more copies of the biblical manuscripts, with remarkable consistency between them, than there are for any of the classics like Plato, Aristotle, and Socrates. F.F. Bruce, New Testament scholar, states, “There is no body of ancient literature in the world which enjoys such a wealth of good textual attestation as the New Testament.” The display of the second century biblical items at the Millennium Gate Museum serves to underscore the legitimacy and soundness of Holy Scripture. The texts are on indefinite loan from the Hanna family and are housed in the museum located beneath the massive structure. The 82-foot, classically inspired triumphal arch called Millennium Gate is the largest classical monument erected in the nation since 1943 when the Jefferson Memorial opened on the National Mall in Washington, D. C. Most triumphal arches in Europe were built to commemorate military victories, but the Millennium Arch represents something entirely different. The arch inscription reads, in Latin: “This American monument was built to commemorate all peaceful accomplishment since the birth of Jesus Christ in the year of our Lord, MM”. Millennium Gate is the creation of Rodney Cook, a fifth generation Atlantan, who studied architecture at Washington & Lee University. Cook’s keen interest in neoclassic architecture and life-long appreciation for Rome’s Arch of Titus influenced his design of the impressive structure at Atlantic Station. While Millennium Gate has a striking presence in the median of 17th Street, its 12,000 square foot museum below street level is remarkable. Cook, who is also the president of the National Monument Foundation, has just hosted in the museum the largest U.S. exhibition of Winston Churchill’s paintings since the 1965 World’s Fair in New York City. Moving into the space vacated by the Churchill exhibit is a display of Georgia and Atlanta history highlighted by narration through sophisticated interactive technology not found anywhere else in the world, as well as film, period rooms, and exhibitions.
How to visit the museum ► The massive arch is located at 395 17th Street NW in Atlanta, 30363. ► The museum is open Monday through Saturday from 10 a.m. until 5 p.m. and on Sunday from 12 p.m. until 5 p.m. ► General admission is $12 for adults and $10 for seniors and members of the military. ► Two hour complimentary parking is available at Atlantic Station. Park near the Publix Stairwells 8 and 10. ► For more information call (404) 881-0900 or visit thegateatlanta.com.