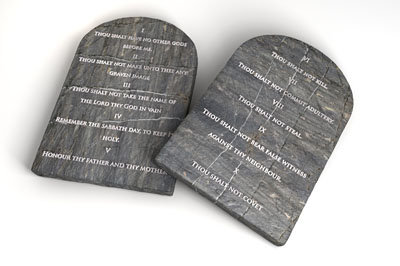 GLYNN COUNTY — News outlets in the Brunswick area report a letter from the Glynn County Schools superintendent is instructing local principals to remove displays of the Ten Commandments outside of its "Freedom Wall."

The Freedom Wall came about when the former school board attorney made a deal 20 years ago with the ACLU. That limited displays of the Ten Commandments to an area devoted to documents of historical note. Now, the ACLU complains the arrangement is no longer being followed to its liking.

According to GoldenIsles.news, the ACLU's letter last week to the school system demanded all copies of the Ten Commandments removed from schools. An email memo from the central office to local principals instructed them to do so with the exception of the Freedom Wall.

The memo to principals yesterday by Glynn County Schools Assistant Superintendent James Pulos asks for expediency in taking down displays.

"These items must be removed from view and collected for the time being until additional guidance is provided. Please send me an email response by the end of business today regarding whether or not you had to remove any items from display. This must be resolved today," it read.

The story gained momentum on social media with an online petition circulating to keep up displays of the Ten Commandments. This afternoon the school system released the following statement through Anna Hall, Glynn County Schools public relations specialist:

“The Glynn County School System has, and intends to continue to, comply with its responsibilities under the United States Constitution, including the Establishment Clause of the First Amendment. Superintendent Howard Mann has indicated that he will take appropriate steps through administrative and legal channels to respond to any issues that may be raised in the same way the School System responds to any other issue. At present, all Glynn County schools are outfitted with Freedom Walls which display historical documents that include the 10 Commandments.”

Rumors spread that the phrase "In God We Trust" was also under fire, but reconsidered due to its placement on currency. Kathleen Burch, ACLU of Georgia's interim in-house counsel, sent a letter last week to Mann. In it she said the group had received a complaint about Ten Commandments displays. Also, Golden Isles Elementary School drew the organization's ire for allowing Gideons to distribute Bibles during a school-sponsored event on school grounds.

The ACLU has since filed an open records request for “any and all policies, regulations, or guidelines relating to or developed in connection with religious activities for all schools under the control of the Glynn County School District.”