FORT WORTH – In January Baptist Press reported that Adrian Roger’s widow, Joyce, and the Rogers family had given his library to Southwestern Seminary. Rogers has been commonly acknowledged as one of Southern Baptists’ most admired preachers. He was a three-time president of the SBC and pastor of the Memphis-area Bellevue Baptist Church from 1972-2005.

The Rogers’ Library, located on the second floor of the seminary library, was dedicated on Oct. 20 in the presence of Joyce Rogers, members of the Rogers family, seminary President Paige Patterson, seminary staff and faculty, seminary trustees, and guests. 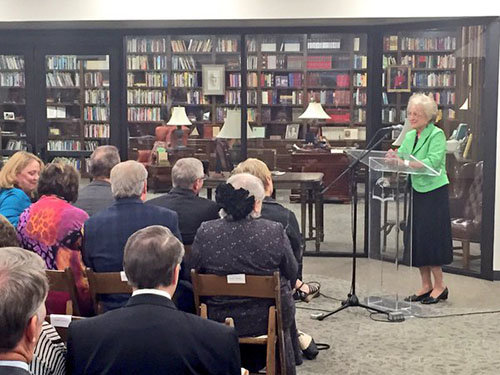 Joyce Rogers, Adrian Rogers' widow, speaks to those gathered at the official unveiling of the section at Southwestern Seminary containing the donated books of one of Southern Baptists' greatest statesmen. @SWBTS/Twitter

The famed preacher’s library was completed just in time for the dedication and contains 3,500 books, sermon notes, photographs, letters, and desks of Rogers.

There are photos of another one of Bellevue’s notable pulpit orators, R.G. Lee, as well as Charles Haddon Spurgeon, Billy Sunday and photos of Joyce Rogers.

In the following paragraphs Baptist Press reported: “The seminary, in a statement, noted, ‘With the addition of this flagship collection to Southwestern’s library resources, future generations of scholars and pastors around the globe will be able to study the notes and sermons of a pastor who studied and wrestled with the Word of God prior to proclaiming it effectively from the pulpit.’” 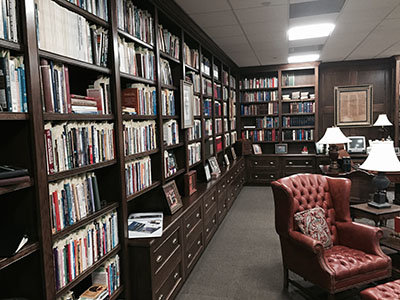 Adrian Rogers was a three-time president of the Southern Baptist Convention, and pastor of Bellevue Baptist Church in Cordova, TN from 1972-2005. GERALD HARRIS/Index

“Adrian Rogers is the greatest pastor and denominational leader whom I ever knew,” Patterson said. “Together with Joyce, he modeled the relationship between husband and wife that I want every one of my preachers to have. I want to share this story of a great preacher with every successive generation.

“This library and study becomes the lynchpin for our Baptist heritage center and the center for expository preaching,” Patterson added. “I stand amazed at the foresight and kindness of the Rogers family.”

Craig Kubic, Southwestern’s dean of libraries, said, “Students and researchers will be able personally to examine the books and many files that informed the life, teaching and preaching of a giant in our denomination. Scholars will have the opportunity to understand the methodology Dr. Rogers used to formulate his sermons, which made such an impact on the Southern Baptist Convention and the world.”

Kubic added that Joyce Rogers “graciously gifted to Southwestern Seminary her personal scrapbooks in which she carefully documented each year of their life together with special attention to the accomplishments of Dr. Rogers. This uniquely personal insight will help scholars appreciate the monumental work and activities of Dr. Adrian Rogers.”

The Adrian Rogers Library joins other notable collections at Southwestern, including those of three of the seminary’s former presidents: B.H. Carroll, L.R. Scarborough, and Robert Naylor as well as other key figures in Baptist life over the years including George Truett, Jimmy Draper, Gipsy Smith, T.A. Patterson, J.M. Price, and J.M. Carroll. 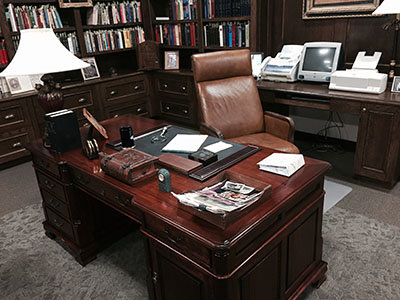 Adrian Rogers donated three desks to Southwestern. Each one was specified for sermon preparation Sunday morning and evening as well as Wednesday evening. GERALD HARRIS/Index

David Allen, dean of Southwestern’s School of Theology, said Rogers’ preaching legacy “extends well beyond the Baptist world. There have been few pulpit masters like him with such a commitment to expository preaching. This collection of his books, sermon manuscripts, and notes will be invaluable as a resource in our Center for Expository Preaching for our students as well as pastors. All will draw not only information, but inspiration from this marvelous collection.”

Joyce Rogers, in presenting the library to the seminary, said, “It is with great joy that I give to Southwestern Seminary the books, filing system, and other memorabilia that belonged to my husband. He was a diligent student of the Word of God. He especially delighted in expository preaching.”

Joyce Rogers, who authored a biography of her husband titled Love Worth Finding, said she had “known and loved Adrian since we were children. We were married for 54 years, and he was a pastor and preacher of the Word for 54 years. I heard him preach his first sermon. I saw him develop from a topical preacher to a prince of expository preaching. I never heard him preach a boring sermon. He became known as a ‘Jesus man’ who passionately called millions to ‘Come to Jesus.’ He challenged me to love Jesus more than any other person.” 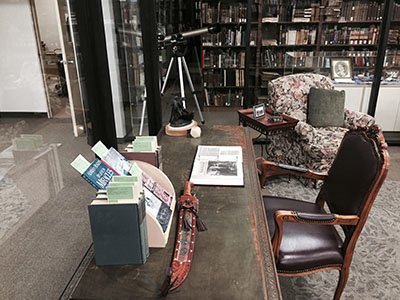 She said Adrian Rogers “was not a collector of his own memorabilia – his legacy was not his focus. It was my joy to collect in scrapbooks and photograph albums items related to our wonderful five churches, his years as president of the Southern Baptist Convention, and a number of mission trips around the world.

“He would not want you to put him on a pedestal,” Joyce Rogers said. “He was a man – but a man of God who wanted to win souls and stand for the veracity of the Word of God. He was willing to risk all in his ‘battle for the Bible.’ Toward the end of his life he remarked, ‘It’s a win-win situation. Heads I win, Tails I win.’ He won!”

Rogers’ preaching continues to be heard through the syndicated Love Worth Finding radio and TV broadcasts.