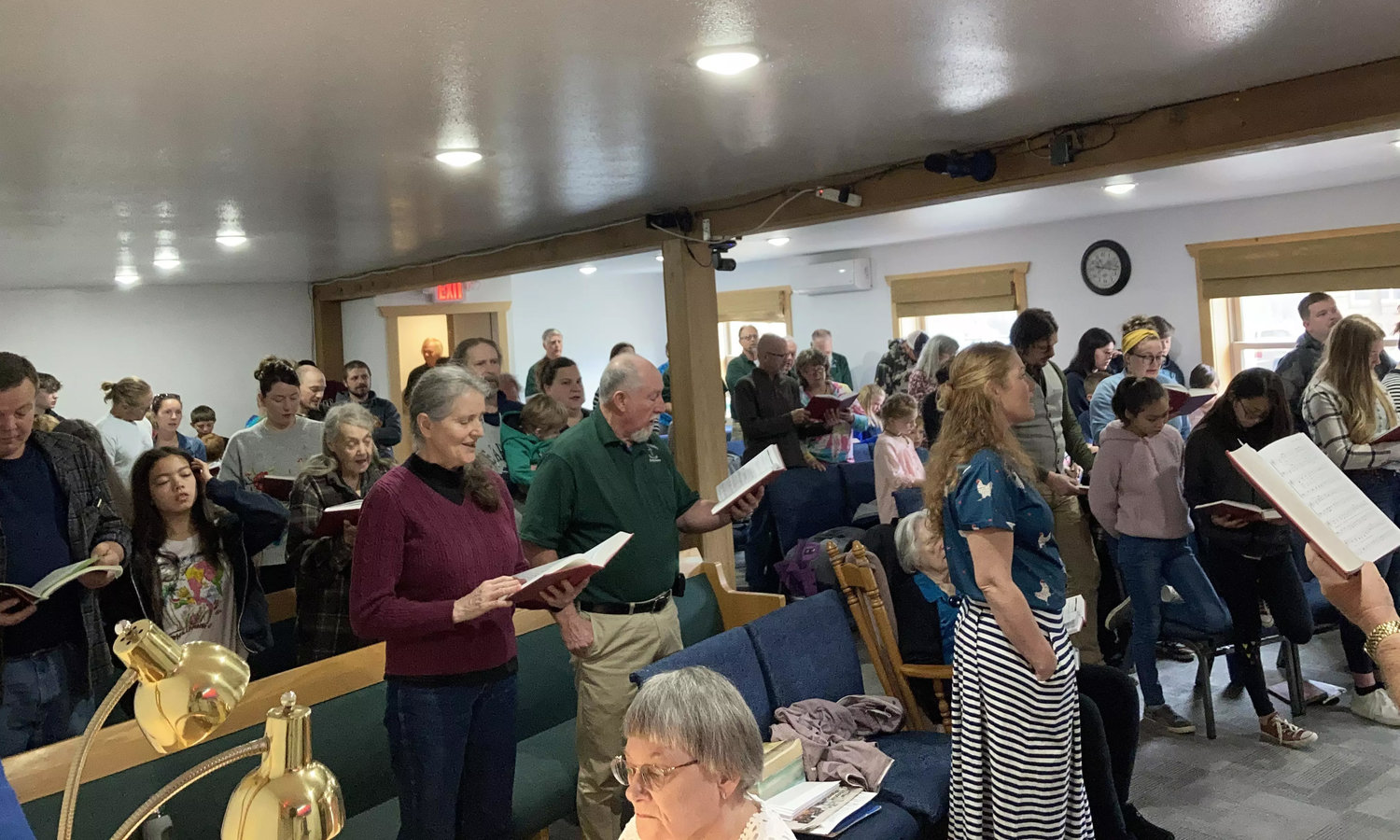 Liberty Church has outgrown the worship area configured in the basement of its unfinished building. (Photo courtesy Jamie Baldwin) 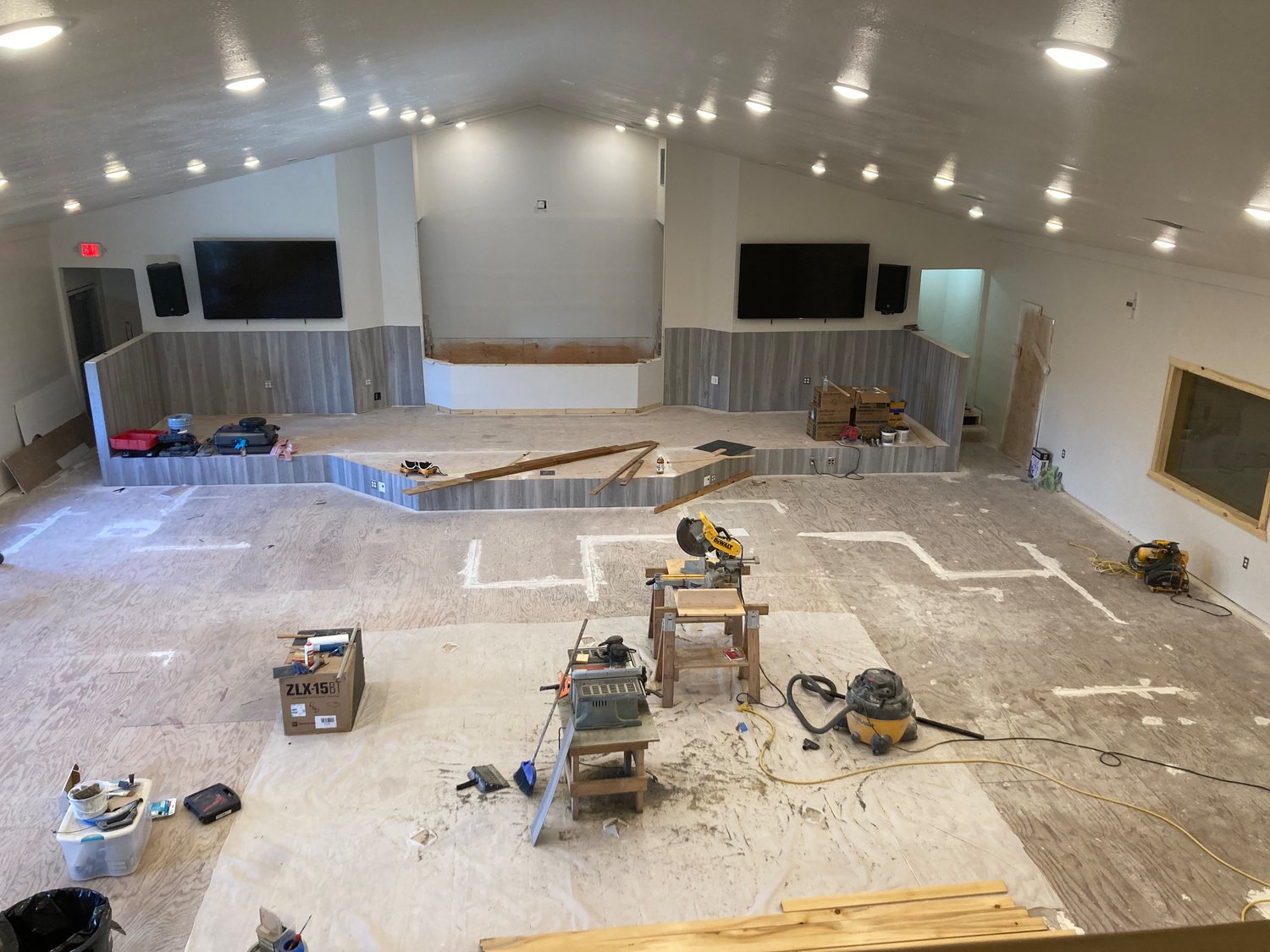 A team from First Baptist Church in Reeltown, Ala., is the latest group working at Liberty Church through a partnership between Alabama and Alaska Baptists. (Photo courtesy Jamie Baldwin)
Previous Next
Posted Wednesday, June 29, 2022 4:43 pm
By SCOTT BARKLEY, Baptist Press

CRAIG, Alaska (BP) – Liberty Church has made great strides in the past year. At one point down to 10 members, it currently averages 50-60 in attendance each Sunday. Community goodwill toward the church has grown through outreach. A partnership with Alabama Baptists has the congregation poised to move into new worship and education space.

On July 3 Liberty will host a Fourth of July extravaganza open to the public, celebrating what God has done in addition to dedicating its new building and recognizing the ordination of Pastor Cody Schwegel. With such momentum, Schwegel’s response after being asked about further plans may surprise you.

That doesn’t mean the church’s work will fizzle out like a July 5 sparkler. Schwegel grew up in Craig, a town that despite a population of just over 1,000 is nevertheless the largest on Prince of Wales Island, which is conversely the fourth-largest island in the United States. He’s familiar with the effects of the long, wet winters that contribute to depression and drug and alcohol addiction. He’s seen firsthand the lack of jobs and loneliness from isolation.

It’s an environment where Liberty Church can become a beacon for freedom through Christ.

“It’s a perfect place for the Church to get its act together and minister to people through love and grace,” he said. “There are so many opportunities to change the direction of the generation coming up, to be the generation that seeks God’s face.

“We want to show them that God’s love is better than what the world can give them.”

Schwegel had been a ministry leader and apprentice at Anchor Church before being named pastor. Anchor struggled and in October 2020 decided to shut the doors for a season, with plans to replant.

“I’m not a quitter,” Schwegel said. “The church was strong; we just didn’t have the numbers.”

About 2,800 miles away, Jamie Baldwin was preparing to enjoy retirement in Tallassee, Ala. Baldwin had spent 23 years in Sunday school and discipleship ministries with Alabama Baptists, but had barely leaned back in his rocking chair before he got a phone call.

Scotty Goldman, Alabama’s director of the Office of Global Missions, was on the other line. Alaska Baptists had called asking for help with a church revitalization. Could Baldwin help?

That led to a five-year partnership agreement between Alaska and Alabama, with Baldwin living in Craig for six months last year and currently coming to the end of two months there.

“I will be 68 years old [on June 25] and have 50 years in the ministry,” Baldwin said. “I have never worked so hard in my life nor been part of a greater blessing than the last two years working with Cody and Liberty Church.”

Nine teams comprising more than 70 people visited last summer to help finish the construction of Liberty’s building, begun when it was still Anchor Church. Baldwin told Baptist Press that he estimates more than 100 Alabama Baptist churches gave by sending either volunteers or money.

A group from First Baptist Church in Reeltown, Ala., is currently working to complete the upstairs sanctuary and education space in time for the July 3 celebration.

“Folks in the town are seeing the difference in the church and how they’re reaching out to the community. They’re seeing what’s happening here,” said Tim Smith, First Reeltown’s pastor.

“It’s been pretty cool to watch. Our folks who are here are seeing it too and it keeps them energized.”

Schwegel knows about energy, as he works full-time for Alaska Power & Telephone. Liberty’s outreach team had made its presence felt last year through efforts such as providing a backpack for every child on the island who wanted one. Schwegel felt God calling for another big effort at Christmas but knew the church didn’t have the funds. He filed for grants and asked around, but nothing materialized. Schwegel told church leaders he didn’t think the outreach would happen.

Then he went to work and found a $5,000 check waiting on his desk. His company was so impressed with Liberty’s community impact that it fast-tracked a grant that would normally not appear until January.

That grant turned into presents for children on the island, with custom wrapping paper that said “Liberty Church” and a gift note. The final gifts were deposited on front porches on Christmas Eve.

“Facebook was lit up the next morning of people posting pictures,” Schwegel said.

Liberty will celebrate its one-year anniversary as Craig recognizes the 100th anniversary of its being incorporated as a city. In that relationship, Schwegel’s current sermon series is focused on developing the church as an agent for the Gospel and change in the culture.

The culture and ministry setting of Prince of Wales Island epitomizes the importance of Southern Baptist work in those areas, as was recognized in the recent resolution SBC messengers adopted at their annual meeting in Anaheim on the mission field in rural America. It also shows the importance of Baptist partnerships.

“We are so excited about the new vision and passion for reaching the community of Craig with the Gospel,” said Randy Covington, Alaska Baptists’ executive director. “Liberty Church, along with pastor Cody, couldn’t have done this without the efforts of Alabama Baptists and the Alaska Baptist Resource Network in a coordinated revitalization effort. This church will also be instrumental in reaching other communities across the Prince of Wales Island.”

More volunteers will soon be needed. Liberty recently signed a contract for acreage on a lake and has 40,000 board feet of lumber donated for construction. An earth-moving company has committed to get the work underway after the deal is closed.

The idea is to help children in southeast Alaska have a place to go that won’t break the bank just to get there. The island is accessible only by plane or a three-hour ferry ride. A roundtrip air ticket to Juneau costs $1,100, Schwegel said. The nearest Southern Baptist church from Craig is in Anchorage, about the same distance as from Montgomery to Des Moines.

“There is another camp in Alaska that wants to help us staff it,” he said. “We just need to get the ministry leaders there and raise the funds. We have a year to do it, but we’ve seen God work in miraculous ways.”

Schwegel has no further plans for ministry because he doesn’t consider them his plans. They should come from God, with Liberty Church being obedient to follow them.

“One of the mistakes we made in the past was having expectations,” he said. “If you do things with expectations and things fail, you get discouraged. It prevents you from attempting to do what God is calling you to do.

Alaska church revitalization is the result of letting God work, Schwegel says, “We go into ministry events not expecting anything except to just be obedient and let God work. Let His message work the way that He intended it.”