Alcohol moderation isn't the cure, but the cause 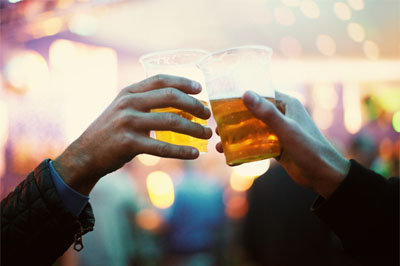 In Part 1 of this series we stated clearly that the best option for a believer in Christ is total abstinence from all that can intoxicate. We made the point that the wine Jesus’ drank is not the same as the wine available today. We stated that it is logical that our Lord’s character would cause Him to refrain from advocating “the use of a beverage that would cause one to be diminished in their moral actions and mental activities.”

But what about the Holy Spirit? One main purpose of His work is to glorify Jesus. Therefore, a significant question as we consider social or moderate drinking is: will it glorify Jesus? “Therefore, whether you eat or drink, or whatever you do, do all to the glory of God,” (1 Corinthians 10:31).

The contrast to being filled with the Spirit

Why do people drink alcohol? The reasons are too numerous to report but certainly include: acceptance, happiness, to ease pain, to take revenge, to build courage, to excuse other sins (because it weakens inhibitions), to appear socially correct, or to feel good. But the problem with alcohol is that it controls the one who consumes it! Paul says we are to be controlled by the Spirit and therefore should never allow anything else to control us. Self-control is a fruit of Spirit (Gal. 5:22-23). Drunkenness is not the only marker for impairment.

We must all agree drunkenness is sinful

Getting drunk or high by alcohol or drugs, legal or illegal, is immoral, sinful, and wrong! “Wine is a mocker, Strong drink is a brawler, And whoever is led astray by it is not wise” (Prov. 20:1).

Drunkenness is never acceptable, but the only way to insure you never get drunk would be that you never drink alcohol. So, while we can all agree on the Scripture’s condemnation of drunkenness, we should also know what else the Bible says on the subject.

A lot of church people are drinking

John MacArthur quotes a survey that says 81 percent of Catholics and 64 percent of Protestants drink. Whether you drink or not is not a sign of your spirituality. Your spirituality is what you are in relation to Christ; what you do is a manifestation of who you are. So the question is, does social drinking manifest the qualities and attributes of Christ, does it glorify Him?

I might add that drinking will not, in and of itself, send you to hell. It may well hasten your death but it won’t determine your eternity. It will surely make you smell and act like you have either been in hell, or that you are considering a visit!

What the Bible says

Peter says alcohol is a mark of those who will not enter heaven (1 Pet. 4:3-5). Drunkenness disqualifies one from spiritual leadership (1 Tim. 3:1-13; Titus 1:7). The Priests in Old Testament times were forbidden to use wine (Lev. 10:9). Jesus called John the Baptist the greatest man who ever lived (Matt. 11:11). While certainly not the only reason, Scripture notes that John abstained from wine (Luke 1:15-16). This barely scratches the surface of the Bible’s condemnation of alcohol.

Do these verses merely refer to drunkenness, or do they also include so-called “moderate drinking?” The problem is the issue of what constitutes drunkenness. Should we affirm anything that impairs our judgment?

There are three reasons a pastor, and for that matter any professing Christian, should be a teetotaler: because of the ...

Regarding the social impact of alcohol

We could speak all day long on the statistics that reveal the terrible toll alcohol takes on individuals, families and businesses. Those statistics reveal the very negative impacts of alcohol, which are many and easily researched. Some of those statistics are revealed in Richard Land’s article from 2006 here.

Approaching this from a pastoral ministry standpoint, I would never advocate the use of alcohol. Why?

I have spent the night with an alcoholic whose family had left him and he was contemplating suicide. Getting him through the night and sobered up, I fortunately convinced him to come and see me later so we could talk about how to get the victory.

Showing him from the Word of God that God hates alcohol, he repented of his sin, was gloriously saved, and took the pledge of abstinence from all that could intoxicate. He became a faithful church member, his family was restored, and God began to use him greatly.

One who advocates the moderate, social use of alcohol cannot be effective in this situation. Any encouragement to this man that he could have Jesus and booze too would have sent him into drunken frenzy.

The social impact of alcohol is too great for us to make the mistake of encouraging its use among God’s precious people. In a future article we will address the scriptural injunctions against alcohol and the spiritual influence we have as believers regarding alcohol.