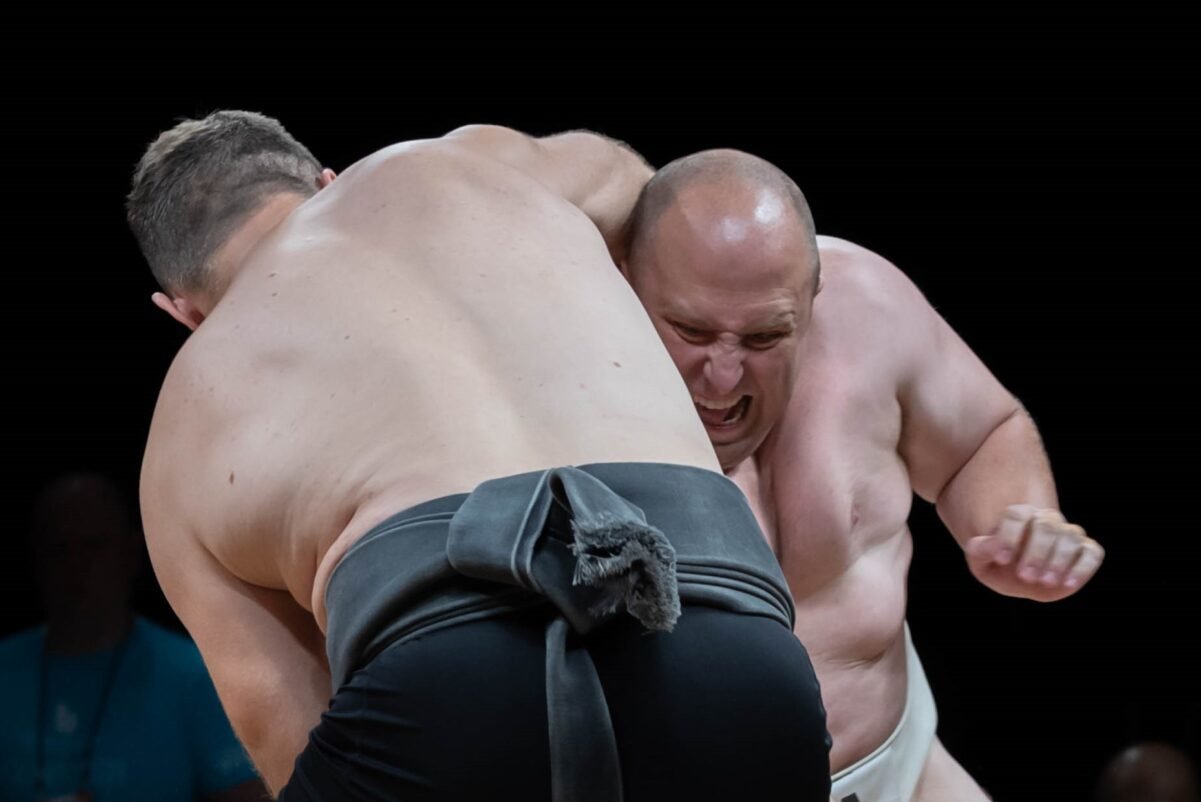 Andrew Roden gives his all at his World Games match. (The Alabama Baptist/Tracy Riggs) 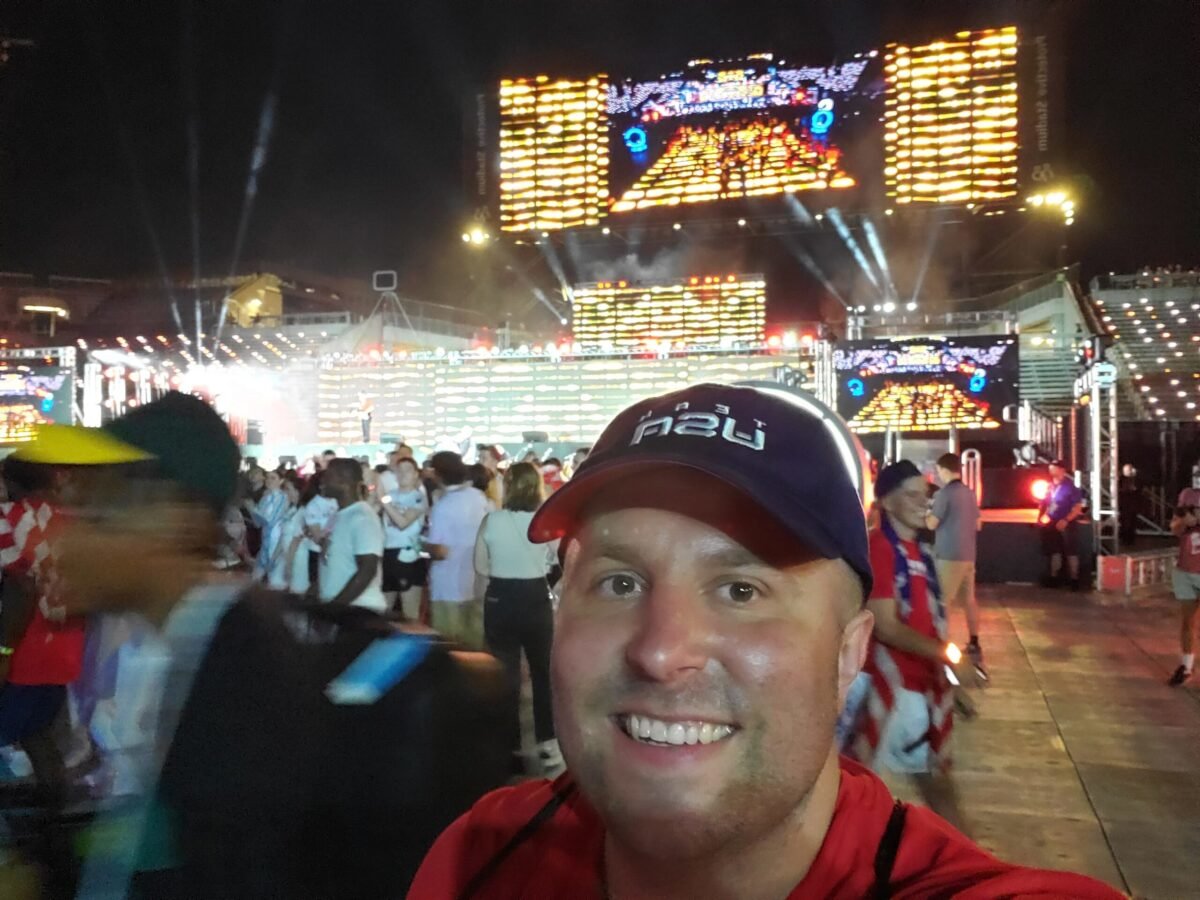 Sumo wrestling might be considered an unusual sport for an American, but for Andrew “Stonewall” Roden, whose Alabama roots go back to the Revolutionary War, it was literally taking a different traveling route that led him to the sport.

After a day in Birmingham, Roden and a friend decided to go another way home.

“For whatever reason, on our way back to the interstate, we ended up taking more surface roads,” Roden recalled. “We didn’t go back the way we came. We just happened to pass the city limit sign that said, ‘Home of the World Games.’”

He was intrigued. So, while riding back to Huntsville, Roden did an internet search to find out more, thinking about attending. While scrolling through the sports, sumo wrestling stood out to him.

After some research simply to learn about the sport, he eventually realized it was possible he might be a good fit for it.

“When I wrestled in high school and college, I was very physical, very explosive, and very powerful, which are three of the main tenets of sumo,” Roden explained. “When I looked at sumo and started learning about it and realized I might be good, I thought, ‘Wow.' It’s almost like everything I’d been through as long as my athletic career was concerned. It was almost like God was grooming me to be a sumo wrestler.”

He began training in May 2020, with the specific goal of making the World Games U.S. sumo team.

He went on to win the 2021 National Championship as well as the 2021 North American Championship, which was the qualifier for the World Games.

As he didn’t grow up in the world of sumo wrestling, Roden also didn’t grow up going to church. His family was Baptist and, though his grandmother went to church “every time the doors opened,” he lived with his father, who only attended on major holidays.

Wrestling exposed Roden to a relatable faith journey, with two coaches who had strong faith and shared it with him without being pushy.

In 2016, Roden went through a “rough patch,” thinking being a good person was enough. Even though he tried to “do right,” bad things kept happening. He said he often thought, “Why?”

Then he had a personal experience with God.

“I heard God call to me,” Roden remembered. “I said, ‘You know what — this is the problem: I can be a good person and try to do good things, but my spiritual life is a wreck.’ I started realizing that’s sort of why all this stuff — part of the reason at least — was happening.”

“Through building a relationship with God, building that faith, that understanding that He is moving me to where He wants me to be, it’s helped me be a lot more at peace with things. It’s helped me get a lot more open-minded to try to see His guidance — for example, all the stuff that led me into sumo.”

Though the sport’s history can be traced back to the Shinto religion, only professional sumo wrestlers in Japan include religious rituals now — the spirituality has been taken out at the amateur level.

However, there is one nonreligious tradition practiced by all wrestlers — early competitors would wear long flowing robes and upon entering the “dohyo” — the area of play — would squat and move their extended arms around in a circle, showing there wasn’t a hidden weapon. The tradition now shows that an athlete will “fight fair.”

Fighting fair also is behind the “mawashi,” the uniform sumo wrestlers wear. Because it’s so revealing, it’s not possible to hide a weapon.

Roden said he will continue competing until he feels God telling him to move on. In the meantime, he has begun working on a Ph.D. in psychology.

Though not happy with his World Games performance, where he slipped and lost his first round, Roden wouldn’t change anything about his journey.

“Maybe that’s part of it — the way God wants things to play out,” Roden said philosophically. “It wasn’t in the cards for me to medal. That’s where, ‘Well, God isn’t ready for this to be over.’ If I had won gold this year, I might have just hung it up.

“Your faith gets challenged every day in some capacity,” he acknowledged. “When you compete at a sport at my level, it’s going to get challenged a lot more. I’m keeping a positive mentality because I know I’m chasing something greater than myself.

“God led me here — this is what God wants,” he said confidently.

Vote in Ukraine's Russia-held areas stokes tension with West
KYIV, Ukraine (AP) — Referendums that are expected to serve as a pretext for Moscow to annex Russian-held regions of Ukraine reached their final day of voting Tuesday as the preordained outcome of the Kremlin-orchestrated votes heightened tension between Russia and the West.
© Copyright 2022 The Christian Index | Copyright/Terms of Use
Powered by Creative Circle Media Solutions