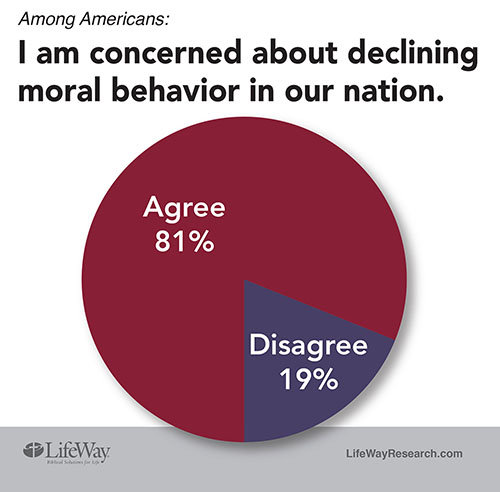 NASHVILLE (BP) — Most older Americans say right and wrong never change. Younger Americans – not so much, according to a new study released May 9.

The study by LifeWay Research found a significant generation gap in how Americans view morality. More than 6 in 10 of those older than 45 say right and wrong do not change. For those 35 and younger, fewer than 4 in 10 make that claim, according to the study that was conducted Sept. 2–Oct. 1, 2016.

That's a huge shift between generations, said Scott McConnell, executive director of LifeWay Research. Older Americans grew up at time when ideas about morality were more stable, he said. That's no longer true for younger Americans.

LifeWay Research's representative survey of 1,000 Americans found most worry moral behavior is on the decline.

Researchers found 81 percent of Americans agree with the statement, "I am concerned about declining moral behavior in our nation." Nineteen percent disagree.

Yet Americans disagree over whether morality can be legislated. 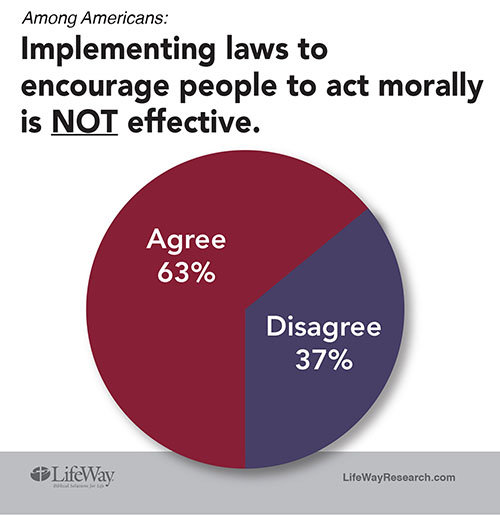 As part of the study, LifeWay Research also asked Americans how they decide between right and wrong on a personal level.

Half (52 percent) say right and wrong never change. A third (32 percent) say whether or not someone gets hurt plays a role in determining if something is right or wrong. Americans also consider whether something is legal (24 percent) or whether the benefits outweigh the costs (20 percent) when thinking about morality. Fewer worry about what the majority of people think (8 percent) or whether an institution gets hurt (10 percent).

Overall, according to the study, Americans seem guided more by their internal moral compass than by laws. Almost no one (4 percent) worries about getting caught when deciding between right and wrong.

Faith, geography, education, and gender divide Americans when it comes to morals, the study shows.

That's especially true about the link between morality and preventing harm. Women (36 percent) are more likely than men (28 percent) to consider whether someone gets hurt when thinking about right and wrong. Midwesterners (37 percent) worry more about hurting others than Southerners (27 percent). So do those with a bachelor's degree (44 percent) or a graduate degree (38 percent), nones (44 percent) and those without evangelical beliefs (35 percent).

Those with a high school degree or less (26 percent), Christians (26 percent) and those with evangelical beliefs (16 percent) are less likely to consider whether someone gets hurt when looking at right and wrong. 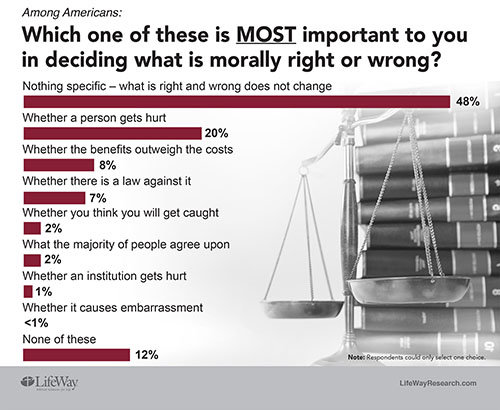 Researchers asked the question two ways. First, they gave Americans a list of potential factors and asked them to select as many as applied. Among those influences: parents (64 percent), religious beliefs (50 percent), personal feelings (42 percent), friends (35 percent), teachers (26 percent), and media like books, movies and music (14 percent).

When asked which of those factors are most influential in shaping their moral views, Americans name their parents (39 percent), followed by their religious beliefs (26 percent) and their feelings (18 percent). Friends (4 percent), teachers (2 percent), and media (3 percent) are less influential.

Those with evangelical beliefs are most likely to point to their faith (64 percent), rather than their parents (22 percent). Those who attend religious services once or more a month also say faith (51 percent) has the biggest influence on their morals – as opposed to only 13 percent of those who attend less than once a month.

McConnell said he's not surprised that evangelicals point to their faith first when it comes to morality.

"For those with evangelical beliefs, the Bible is the ultimate authority," he said. "It trumps everything. So it's going to be the source for how they determine right from wrong.

"However, for Americans there is no most influential source of morality embraced by a majority."