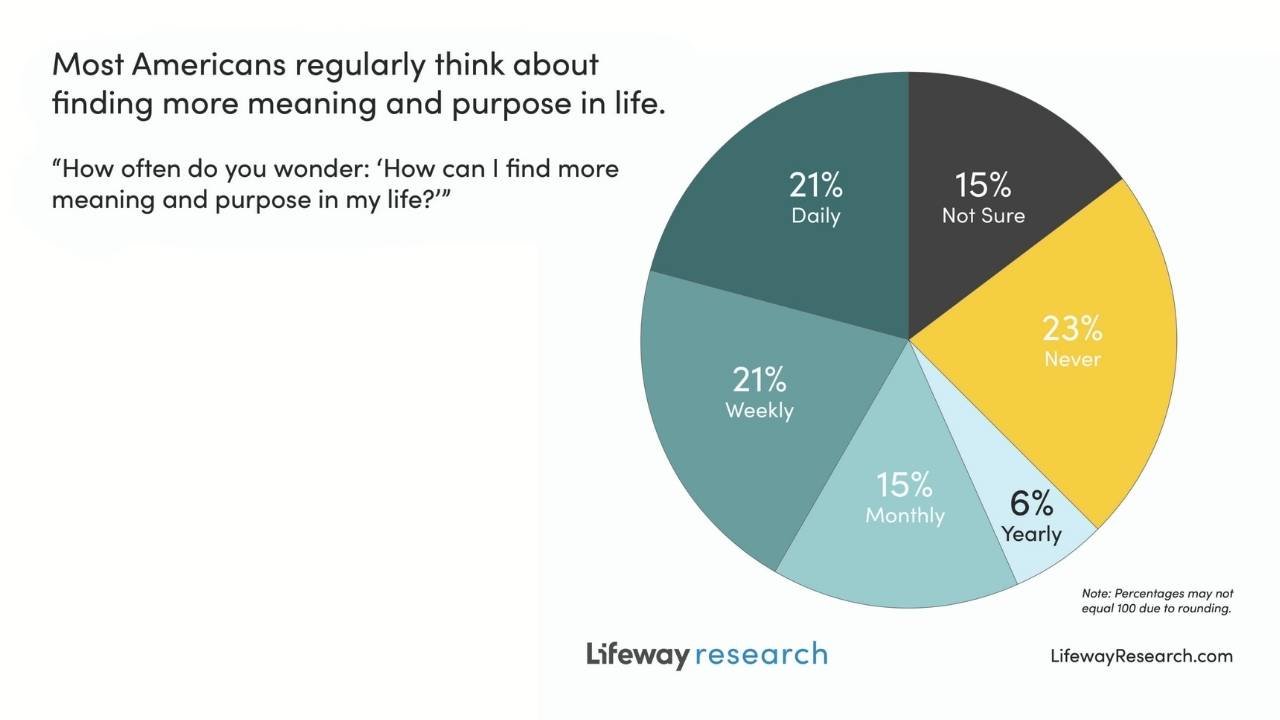 NASHVILLE – As Americans attempt to move past the life-altering effects of 2020, their perspective is shifting on some of the most significant questions facing humanity.

Americans are also more likely to contemplate whether they will go to heaven when they die but less likely to strongly believe there is more to life than this physical world.

“In the midst of such a discouraging season, fewer Americans are convinced there is something more to this life than their daily activities,” said Scott McConnell, executive director of Lifeway Research. “A large majority still lean toward there being an ultimate purpose for a person’s life, but instead of escaping the pandemic with thoughts of something greater, far fewer strongly hold such a view. A growing number of Americans have become open to the idea that this might be as good as it gets.”

“During COVID-19 many experiences, pleasures, and metrics of success became irrelevant overnight,” McConnell said. “It is not surprising that more people thought about their purpose and what matters in life.” 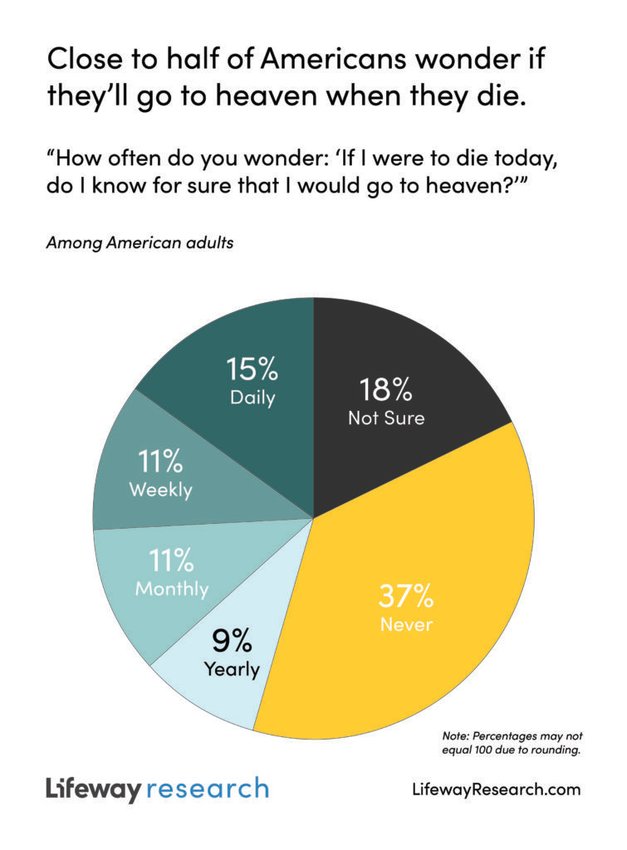 Most Americans say everyone’s life has a purpose, and it’s important to them that they pursue their deeper purpose, but U.S. adults aren’t as sure about that as they were a decade ago.

Each of those percentages is similar to 2011. There has been a significant shift, however, from strong agreement to more hesitant agreement. Those who strongly agree with each statement dropped, while those who somewhat agree rose.

“Few Americans are ready to deny there is an ultimate purpose and plan for every person’s life,” said McConnell. “But more are stepping back from this driving their own pursuits. Life has become a more pessimistic pursuit with fewer going all out for something better.”

As Americans consider higher meanings, most believe they have found it. Close to 3 in 5 (59 percent) say they have found a higher purpose and meaning for their life, with 28 percent disagreeing. 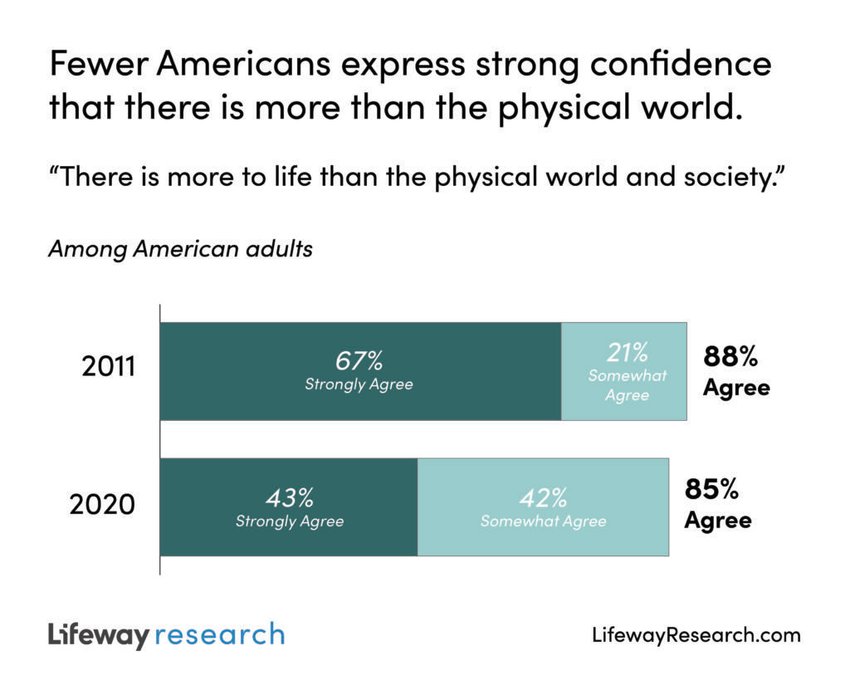 Close to half of Americans (45 percent) say they wonder, “If I were to die today, do I know for sure that I would go to heaven?” More than a third (37 percent) say they never think about that question, and 18 percent aren’t sure.

Compared to 2011, more Americans today say they wonder if they’ll go to heaven daily (15 percent to 8 percent), and fewer say they never think about it (37 percent to 46 percent). More now also say they aren’t sure how often they consider the question than a decade ago (18 percent to 12 percent).

Christians who attend worship services four times a month or more (46 percent) are as likely to say they never wonder about their eternal destination as the religiously unaffiliated (47 percent), but perhaps for different reasons. Those religious nones, however, are more likely to say they never ponder if they will go to heaven when they die than Protestants (37 percent) and Catholics (26 percent).

“The question of going to heaven doesn’t cross the minds of people who don’t believe in heaven and those who are completely certain they will go to heaven,” McConnell said. “While the Bible teaches one can be certain a place is prepared for you in heaven, nearly half of Americans pause each year wondering if heaven is waiting for them.”

Even if most Americans aren’t regularly contemplating their admittance to heaven, the vast majority believe there is more to life than just what they can see.

More than 4 in 5 U.S. adults (85 percent) believe there is more to life than the physical world and society. Few disagree (9 percent) or are not sure (6 percent).

In the latest study, Americans ages 18 to 34 and those 35 to 49 (87 percent) are more likely to say there is more to life than the physical world than those 65 and older (79 percent). The religiously unaffiliated are the most likely to disagree (20 percent).

The online survey of 1,200 Americans was conducted Sept. 9-23, 2020, using a national pre-recruited panel. Quotas and slight weights were used to balance gender, age, region, ethnicity, education and religion to more accurately reflect the population. The sample includes an over-sample of Americans with evangelical beliefs providing additional reliability for breakouts of this group. Totals for all Americans reduce these responses to their correct proportion through weighting.

The completed sample is 1,200 surveys. The sample provides 95 percent confidence that the sampling error from the panel does not exceed plus or minus 3.2 percent. This margin of error accounts for the effect of weighting. Margins of error are higher in sub-groups. Comparisons are made to a Lifeway Research survey conducted Sept. 23-26, 2011 among 2,144 Americans using an online panel.

For more information, view the complete report or visit LifewayResearch.com.