An event worthy of a coat and tie

The campus was in pristine condition for the extravaganza. The students, sparkling with pride, were a vital part of the welcoming party. The staff and faculty were as charming as anyone could imagine and the epitome of southern hospitality. President Emir Caner looked sartorially elegant with a suit and “TIE”, which he wears only for funerals and fund-raisers. Hana, the president’s wife and first lady of TMU, was as attractive and amiable as ever. 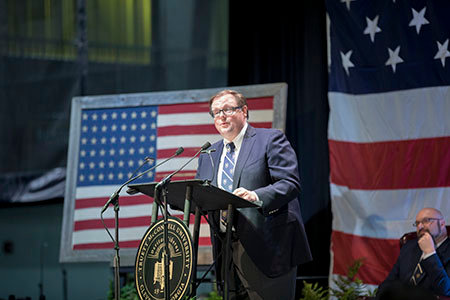 Todd Starnes of FOX News was the master of ceremonies for the Faith and Freedom Rally. The smaller flag behind him is the 48-star flag used from 1912 to 1959 and was loaned to Truett McConnell for the event by John Knoll, a member of Concord Baptist Church in Clermont. JENNY GREGORY/TMU

Todd Starnes of FOX News and Lieutenant Colonel Oliver North, New York Times best-selling author and retired United States Marine Corps war hero, were the featured program personalities, and Jake Cowley, one of America’s “Top Ten New Gospel Artists” repeatedly thrilled his audience with his renditions of the National Anthem, the Battle Hymn of the Republic, I Believe in a Hill Called Mount Calvary and Only Jesus Can Heal This Hurting World.

Upon entering the Wellness Center guests, including business entrepreneurs, public servants, pastors, alumni, educators, and friends of the University, were privileged to sample the appetizing display of hors d’oeuvres and take advantage of photo ops with Dr. and Mrs. Caner and the featured program personalities.

On display near the entrance of the Wellness Center was an amazing replica of the Tomb of the Unknown Soldier presented for display by the Exchange Club from Rome, GA. The tomb is a half-scale replica of the original at Arlington National Cemetery in Virginia. The replica is displayed at many events to “make sure that the sacrifices of our men and women in uniform are never forgotten.” 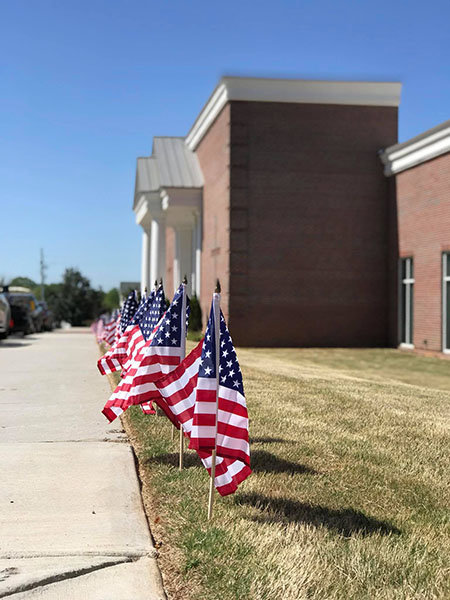 U.S. flags lined the sidewalks around the George Blaurock Wellness Center at TMU for the Faith and Freedom Rally. JENNY GREGORY/TMU

A delicious meal was served on the gym floor of the new Blaurock Wellness Center where hundreds of people enjoyed dining on the main course of filet mignon and shrimp. An additional 800 people joined the diners for the program, which started at 7:30 p.m.

A patriotic theme was maintained throughout the evening including the presentation of colors, the pledge of allegiance to the flag, and beautiful music by Cowley and the TMU Chorale and Wind Ensemble.

President Caner introduced Todd Starnes by alluding to his allegiance to the University of Tennessee Volunteers and stating, “I understand the Volunteers are changing their mascot to a possum? Do you know why? Because they play dead at home and get killed on the road.”

Starnes presided over the meeting with his typical homespun humor and avowed love for Chick-fil-A iced tea. He identified himself as a “gun-toting, Bible-clinging, deplorable American.”

Starnes introduced featured speaker Oliver North, who began his speech by reading the Great Commission from Matthew 28:18-20. He then defined a hero. 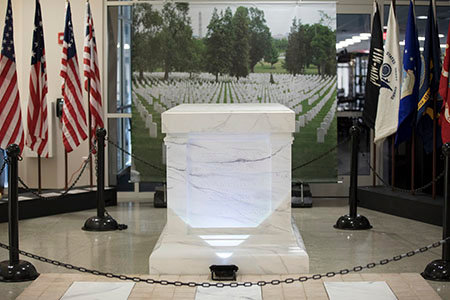 The half-size replica of the Tomb of the Unknown Soldier stands on display at the Blaurock Wellness Center for the Faith and Freedom Rally. JENNY GREGORY/TMU

North stated that he is privileged to keep company with real heroes – the men and women who risk their lives to defend our freedom and uphold our ideals. He compared the mission work of God-called men and women to those who serve in the U.S. Army, Marines, Air Force, and Navy.

The Lieutenant Colonel showed a photo and told a story about evacuating wounded people from a gunfight in Baghdad. He explained, “On April 6, 2003 I am embedded with the First Battalion of the Fifth Marines. The unit I am with is engaged with a Republican Guard Regiment. A U.S. Navy Corpsman (a medic) rushes out into the gunfight between the two sides – he is in the crossfire – between the Marines and the Iraqis.

The American Navy Corpsman has risked his life to save an enemy soldier. The wounded Iraqi is about to go to a U.S. military hospital to have his live saved all because this corpsman put his own life at risk to save him. 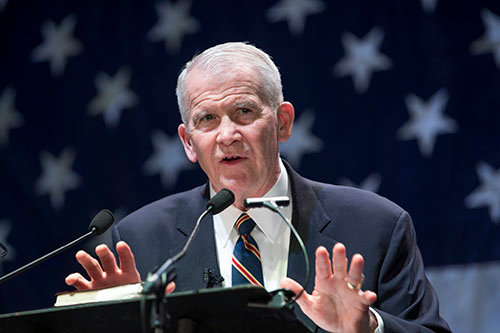 With a huge American flag in the background, Lt. Colonel Oliver North exhorts the audience at Truett McConnell University to engage in something bigger than themselves. JENNY GREGORY/TMU

“The Reuters New crew calls out to the Navy corpsman, ‘Hey, what did you do that for? Didn’t you notice he was an Iraqi?’”

North added, “The Navy corpsman gave the news crew a gesture and replied, ‘Didn’t you notice, he was wounded. That’s what we do. We are Americans.’”

The American war hero challenged those in attendance to support Truett McConnell, because the University is training young people to invest their lives in something far greater then themselves.

It was a spectacular evening as the school was attempting to raise money for students – called the Empower the Call Campaign. The money given will go for student mission trips, retention of scholarships, and missionary student debt. University leaders were hoping the fund raising event would provide as much as $125,000, but by Saturday the figure was approaching $170,000 with money still coming into the University.

I suspect that the fund raiser brought in more money than anticipated, but even if it didn’t there were as many as 1,200 people who left the Faith and Freedom Celebration as promoters, advocates, and proponents of Truett McConnell and fully motivated and prepared to herald the good news of what God is doing on the beautiful mountain campus of one splendid, conservative, Christ-honoring University of which Georgia Baptists should be exceedingly proud.