Andrews to be nominated for Pastors’ Conference president 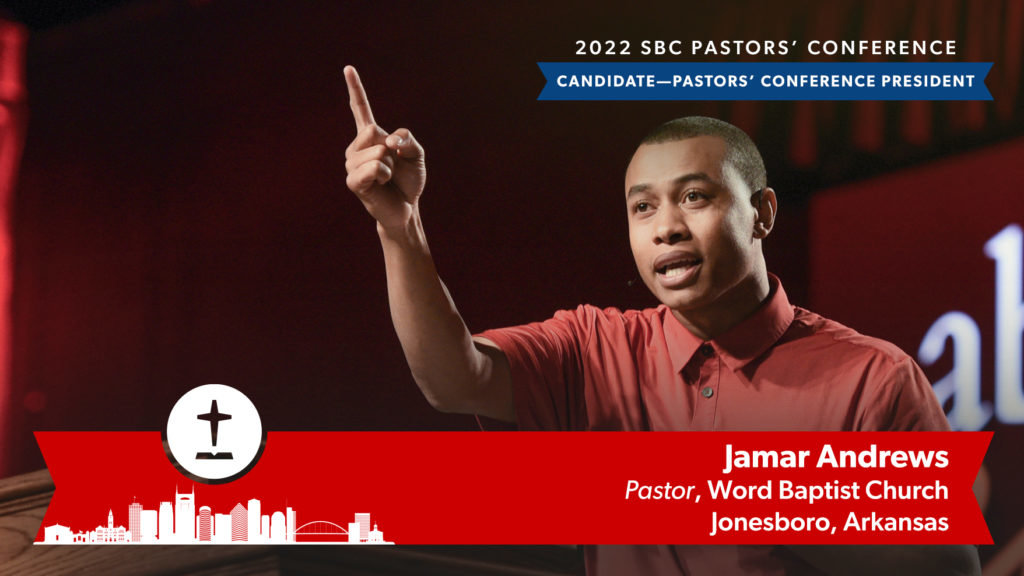 Voting for the 2022 Pastors’ Conference will take place Monday afternoon, June 14, during the Pastors Track of the Send Conference hosted by the North American Mission Board and International Mission Board. Held at the Music City Center in Nashville, it precedes the Southern Baptist Convention Annual Meeting, which will begin the next day. The 2022 SBC Pastors’ Conference will be held in Anaheim, Calif., preceding the 2022 SBC Annual Meeting.

Walker said he and Andrews first connected over a decade ago, stating: “Jamar and I have been through life together as seminary students, co-workers, friends and now pastors. Nominating Jamar as president for our 2022 SBC Pastors’ Conference is the opportunity to uphold the arms of the man of God being called for this role at this hour. Convictional, courageous, and compassionate leadership is needed like never before. Forged by these characteristics, Jamar is equipped to serve Southern Baptists and the Kingdom of God in a special way.”

Word Baptist Church was established in 2017 and has seen steady growth, including adding around 10 percent of its membership through baptism each year. The church has mission partnerships with churches in New Mexico and the Dominican Republic and will soon send a team to Japan.

According to Annual Church Profile reports, the church recorded 157 members in 2020, with a worship attendance of 246. It gave $16,500 – 2.92 percent of undesignated receipts – through the Cooperative Program.

Andrews’ local and national denominational involvement include preaching at the 2017 SBC Pastors’ Conference as well as delivering the convention sermon at the 2019 Arkansas Baptist State Convention Annual Meeting. He currently serves as the second vice president for the ABSC, a trustee for Williams Baptist University in Walnut Ridge, Ark., and has previously served on the SBC Committee on Committees.

Andrews said the Pastors’ Conference holds a special place in his heart for the impact it’s had on him.

“When I was getting ready to go into ministry, I had never pastored before being at the convention in New Orleans,” he said. “And that time was such an encouraging time for me. And so, I would love to see that same process happen in California.”

He said he desires for the 2022 conference to be a source of encouragement and resources for pastors and pastors’ wives, adding: “I would love for this to be a place where brothers can come, hear expositional preaching, be encouraged, be equipped and have resources that are at their disposal. A place that they can come in and be renewed and be encouraged to go back out to their local churches and places where they are pouring their lives out and be renewed and encouraged to fight the good fight after coming off of a very difficult year.”

Andrews is a graduate of Southwestern Baptist Theological Seminary and holds a Master of Arts in Islamic Studies. He and his wife Stephanie are the parents of one daughter and one son.