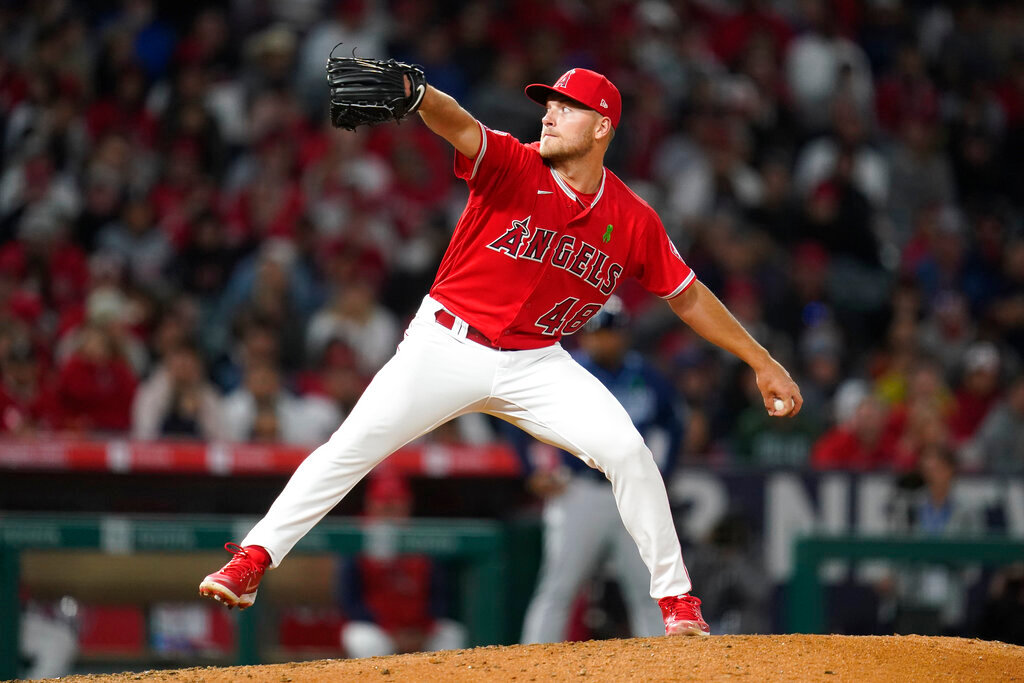 Los Angeles Angels starting pitcher Reid Detmers (48) throws during the seventh inning of a baseball game against the Tampa Bay Rays in Anaheim, Calif., Tuesday, May 10, 2022. The rookie pitched the majors’ second no-hitter this season, cruising after he benefited from a borderline error call in the seventh inning as the Angels beat the Tampa Bay Rays 12-0. (AP Photo/Ashley Landis) 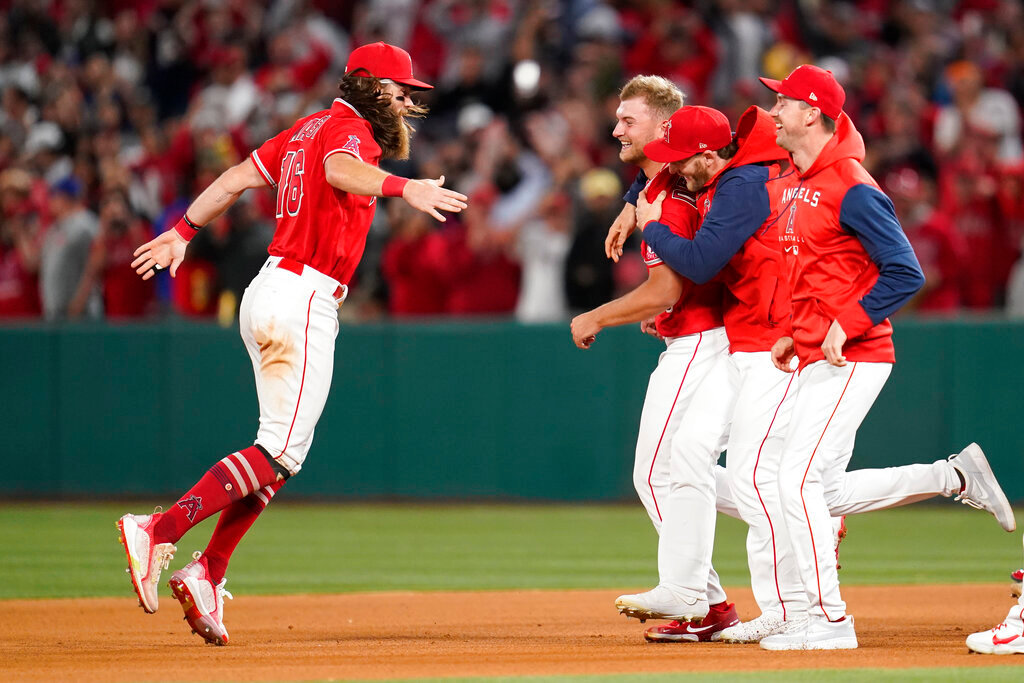 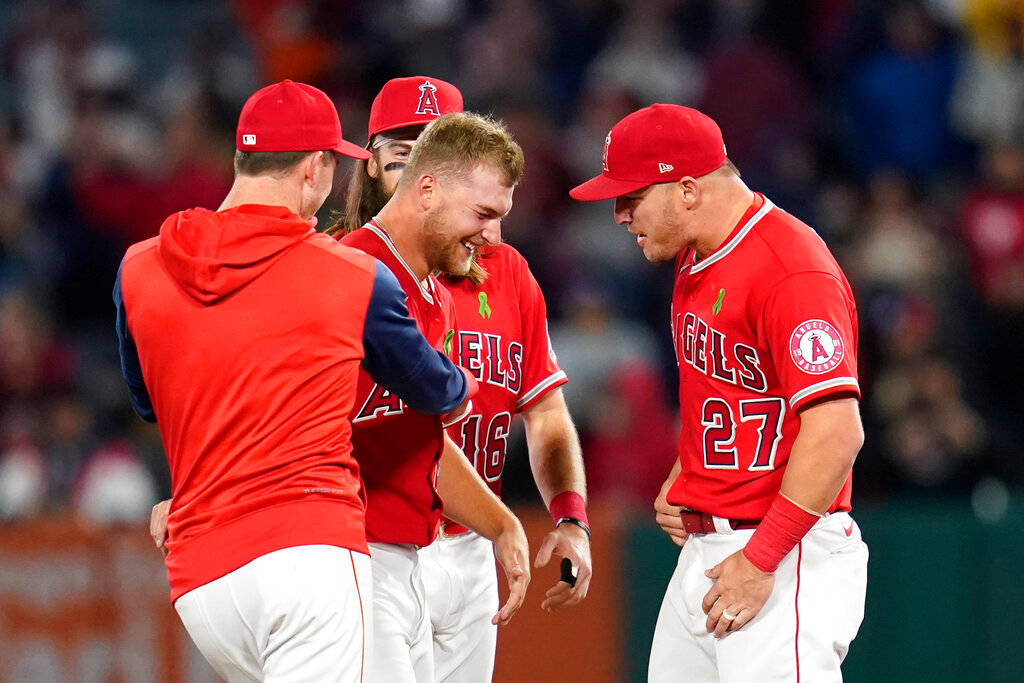 Detmers pitched the majors’ second no-hitter this season, cruising after he benefited from a borderline error call in the seventh inning as the Angels beat the Tampa Bay Rays 12-0.

The 22-year-old left hander threw a career-high 108 pitches in his 11th big-league start, striking out two and walking one. He completed the 12th no-hitter in franchise history when Yandy Diaz grounded out to shortstop Andrew Velazquez to end the game.

“Getting the last out was the coolest part,” Detmers said. “It’s just something I’ve dreamed ever since I was a little kid. I didn’t think it would ever happen.”

He got a crucial assist from official scorer Mel Franks in the seventh.

Brett Phillips reached with one out when first baseman Jared Walsh ranged to his right and bobbled Phillips’ grounder. Walsh clapped when the video board showed the play was ruled an error, and the decision brought one of the biggest cheers of the night from the 39,313 fans at Angel Stadium — a large weekday crowd because it was Shohei Ohtani bobblehead night after he received his AL MVP award before the game.

“I thought that was pretty clearly an error,” Walsh said. “I expect myself to make that play most of the time, so I would have definitely complained if they called that a hit.”

When asked if that might have been ruled a hit if the Angels were on the road, Walsh said: “I think most people that are in the major leagues would admit that was an error.”

Otherwise, Detmers (2-1) hardly had any close calls. He retired his first 15 hitters before Taylor Walls drew a lead-off walk in the sixth. Third baseman Anthony Rendon then made a nice leap to snag Vidal Bruján’s line drive, and Kevin Kiermaier ground into a double play to end the inning.

The son of a former minor league pitcher with the St. Louis Cardinals, Detmers was the 10th overall pick in the 2020 draft out of the University of Louisville and made his big-league debut last year.

He came into the game with a 2-4 career mark and a 6.33 ERA — the third highest ERA entering a no-hitter since earned runs became an official stat in 1913, according to the Elias Sports Bureau. He was 1-1 with a 5.32 ERA in his first five starts this season.

“He had a much better mound presence tonight. He just looked and felt the part,” manager Joe Maddon said. “Hopefully we are going to get a lot of residue of that in the future, because he's capable of that. Maybe not of no-hitters, I’m just saying that’s how he should pitch. That’s what he should look like more often.”

The Rays simply couldn’t barrel up Detmers, who mixed a fastball averaging 92 mph with a looping curveball, a changeup and a slider.

Detmers came into the game using his changeup only 5.1% of the time this season, but threw a career-high 24 against the Rays.

“I think his offspeed was keeping us off balance. He was throwing pretty much hard and soft away, but he was doing a good job of getting those heaters in,” Walls said.

It was the first time Detmers had gotten an out in the seventh inning or later since June 7, 2019, for Louisville against East Carolina at an NCAA Super Regional. His previous career high in the majors was six innings last season against Houston. He’d never thrown more than 97 pitches in a big league game, either.

Mike Trout had his second multi-homer game of the season and drove in three for the Angels, who have won six of their last seven.

Trout had a two-run shot off Corey Kluber (1-2) in the second to extend Los Angeles’ lead to 5-0 and then added another two-run homer in the eighth for the 22nd multi-homer game. Trout has nine homers this season, which is tied for second in the American League.

Chad Wallach and Anthony Rendon also went deep. Rendon homered in his first major league at-bat as a left-handed hitter in the eighth when Phillips, usually an outfielder, took the mound in the blowout.

Wallach, a journeyman catcher in his 80th career game and only second for the Angels, was behind the plate for Detmers with regular catchers Max Stassi and Kurt Suzuki on the COVID-19 injured list. He and his dad, Tim Wallach, are the first father-son combo to each homer for the Angels.

Velazquez added three hits as the Angels had a season-high 18.

Kluber had a rough outing for the Rays. The right-hander went three innings and allowed eight runs on 11 hits with two strikeouts.