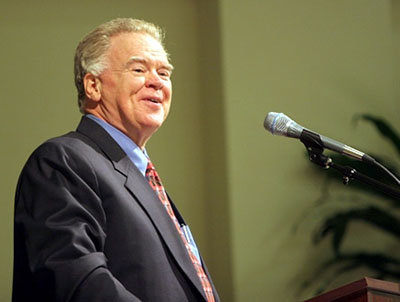 "We are happy about the faithfulness and the example that Lee Scarborough left to us that we can now follow,” SWBTS President Paige Patterson said.
Posted Monday, May 14, 2018 10:16 am
Gerald Harris

If Southern Baptists were as zealous to share the message of salvation, as they are to hurl words of condemnation and denunciation at one another, life would be more peaceful, our ministries would be more fruitful, and the world would be more receptive to what we have to say.

Paige Patterson, president of Southwestern Baptist Theological Seminary in Fort Worth, has been the center of controversy for the past two weeks because of comments he made in a 2014 sermon and an audio clip from 2000.

Baptist Press explained that in the 2014 sermon Patterson “illustrated the Hebrew word used to describe Eve’s being ‘built.’” Patterson added that the girl’s appearance was "nice." Patterson’s critics considered those words inappropriate and offensive.

In the 2000 video clip Patterson expressed views regarding domestic violence that were deemed “dangerous, unwise, and unbiblical” by one detractor. Open letters from both men and women opposing Patterson have attracted significant numbers of signatories. One letter expressed objections to his “continued leadership” at the seminary “without repentance and reprimand.”

More recently an open letter supporting the Southwestern President has been signed by a growing number of allies. Interestingly, those who have been able to observe Patterson from close range seem to be among his most ardent advocates.

Dr. Patterson has apologized for a “failure to be as thoughtful ... as I should have been” in describing domestic violence and the physical attractiveness of women in sermon illustrations.

He reiterated his stand of objecting to any form of abuse of women verbally, physically, or otherwise and asked for forgiveness.

Dr. Candi Finch, assistant professor of theology in Women’s Studies at Southwestern, wrote the school’s Board of Visitors and stated, “I am grieved by the voices who are speaking against him who only know of Dr. Patterson and do not actually know him.”

Finch claims that those who have signed petitions opposing Patterson “do not reflect the majority of Southern Baptists.”

Finch indicated that Dr. Patterson has weathered attack after attack for the 16 years she has known him, but persists in praying for those who slander him and that somehow God would be glorified.

Finch indicated that the attacks on Dr. Patterson “have started from men who have been systematically trying to slander and harm Dr. Patterson for years. I am praying that what these men have meant for evil can somehow be used for good.”

I have known Paige Patterson for a long time. He is not known for being lukewarm or lacking an opinion. That is fine with me. Leaders cannot be indecisive. If he said anything to depreciate women, is it not possible that he simply misspoke? I find it difficult to believe that he deliberately said anything to diminish women in any way. If he did, that was wrong, but he has apologized. Now those who have been offended must forgive or risk not being forgiven themselves (Matthew 6:15).

If Dr. Finch is correct and there are those who wish to harm and slander Dr. Patterson, we must ask, “Why?” Are we now living in a society where people are considered guilty until proven innocent? Are we being inundated with the vitriol of a few bitter enemies who are trying to oust a president to satisfy their vigilante justice? Are we facing the possibility of a hostile takeover of a seminary that is one of Southern Baptists’ last bastions of evangelistic zeal and fervor? Is there a rising tide of dissatisfaction with the old guard and a desire to replace those who have been our heroes with a new breed of aspiring leaders?

In fact, I am wondering if the almost universal disrespect for leadership we see engulfing our nation has now slithered its way into the Southern Baptist Convention. Maybe it has always been here, but it now seems to be pervasive.

We have a serious deficiency with respect to noble values, those in authority, and the elderly. The Apostle Paul prophesied that disrespect would be a characteristic of people in the end times. He declared that it would be a time when people would “be lovers of themselves ... blasphemers, disobedient to parents, unthankful, unholy, unloving, unforgiving, slanderers ... brutal ... haughty” (II Timothy 3:1-4).

Isaiah wrote, “The people will be oppressed, every one by another and every one by his neighbor; the child will be insolent toward the elder, and the base toward the honorable” (Isaiah 3:5).

It has been said that “words can be medicines; they can also be poisons. Words can heal; they can also kill. It all depends on how, when, and where they are used and against whom!”

Although Southern Baptists have gone on record multiple times stating that the Bible teaches that God created all human life in His own image and declares human life to be sacred from conception until natural death, are we now guilty of practicing euthanasia?

Patterson has called for a meeting of the seminary’s trustees for May 22 and one can only speculate as to what the agenda will be and what decisions will be made. Pray for God’s wisdom and grace to abound in that strategic meeting.