As DACA debate comes to a head, Moultrie church shines with near perfect compliance rate

This is the first of a two-part series on how Georgia Baptists, through their Literacy Missions ministry, are working to help children caught up in the national debate on DACA. Today’s installment touches on how the ministry of Memorial Baptist Church diligently works within the legal system to maintain a nearly 100 percent compliance rate to prevent the deportation of children. Tomorrow’s installment will continue with a question-and-answer conversation with Mike and Brenda Arnold as they explain how they use the ministry to share Christ with immigrant and migrant families in South Georgia.

MOULTRIE — If there is one thing Mike and Brenda Arnold stand for, it is the truth of God’s Word.

With that firm foundation they work to hold immigrant and migrant families together who have become entangled in the current Deferred Action for Childhood Arrivals (DACA) and immigration reform debate. And regardless of how some claim the system is rampant with blatant lying among those seeking to abuse the DACA process, that is strictly not tolerated through Memorial Baptist Church’s evangelistic outreach through Literacy Missions. 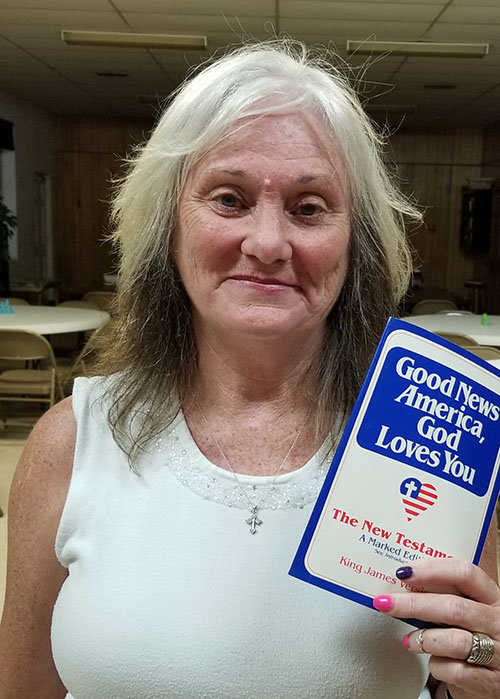 Brenda Arnold uses the Good News, America edition of the Bible to make the connection that the Good News of Jesus Christ is the best news students can receive ... even more important that becoming literate, gaining citizenship, or being approved as a DACA recipient. MIKE ARNOLD/Special

And Federal government records prove it.

The couple freely admit that corruption is present in any government program, the most prominent from income tax preparation. Yet they work to teach biblical values to those to whom they are ministering.

Their rate of DACA paperwork acceptance is exceptional –  slightly above 99 percent but in that very slim range short of 100 percent. Only .0018 percent, or 3 out of 1,693 initial and renewal applications, have been rejected. And, those were because additional documentation was needed; not because of the lying of those making application.

Since they began working with the process when it was launched in June 2012, the couple had only one rejection based on inadequate information. That individual was brought to the U.S. at age 15, but could not prove it because he immediately went to work in the fields and was paid cash. He received no pay stubs, no W2s, no records of employment.

A dozen letters from the labor contractor, friends, and families were not sufficient evidence according to government review of his application. The individual gave up and did not follow through with a Request for Evidence that he could not fulfill.

And, in addition to that isolated case, there were only two denials among those 1,693 – again, for lack of evidence available.

The DACA discussion is complicated and the public frequently confuse it with adult immigrants who intentionally enter the nation illegally. DACA children are not drug dealers, they are not criminals, and those who are granted temporary status against deportation and are of legal working age pay taxes and subsidize the Social Security and Medicare/Medicaid programs of American citizens. They accept the law that prevents them from ever drawing those benefits because they are not citizens.

In a nutshell, the U.S. government has basically decided, on a temporary basis which President Trump is forcing Congress to address, that children who were brought into the country with parents who were illegal are not guilty of a crime because the children were not aware of the law. The government has recognized that the children did not participate in the decision to cross the border without proper documentation, and therefore should not be taken from their families and returned to a nation to which they have no connection. 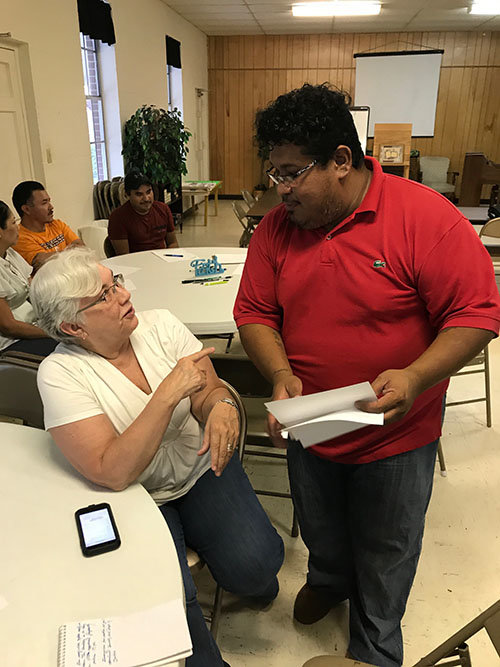 Atlanta and Moultrie immigration lawyer Kembra Smith, left, consults with translator Oscar Torres as they advise children on how to complete their paperwork to avoid immediate deportation. Torres, a naturalized citizen, and Smith met as volunteers through the church's outreach.  JOE WESTBURY/Index

It is not unlike a child being sentenced to 20 years in prison for participating in a bank robbery simply because they were in a child seat in the car used in the crime.

DACA has given a temporary stay of deportation to children who were brought into the country by their parents … and who can prove residency as of June 2012. While some today are in their mid-to-late 30s, the youngest are five years of age.

That is quite an age span, those who work in the ministry agree.

Of the nation’s estimated 800,000 individuals, 24,000 reside in Georgia. Most of them live in the rural counties from Middle Georgia south to the state line, where agriculture dominates the economy and they are employed harvesting crops. For a legal understanding of what DACA is and what it is not, click here. And because of their large presence in the state, that is where the ministry of the Georgia Baptist Mission Board, through Literacy Missions outreach, comes into play.

Mike and Brenda and their volunteers are as outstanding members of the Georgia Baptist Convention as any you can find. In tomorrow’s installment they explain the struggle they encounter to keep the children from being separated from their families – a virtue that any Georgia Baptist should be able to embrace.