As refugee crisis continues to build, Georgia churches need to be ready to respond 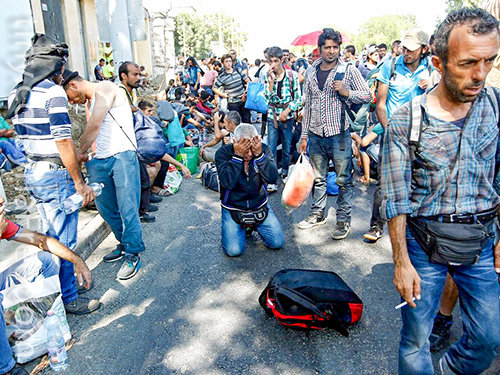 Refugees walk their way out of Budapest on Sept. 9. Georgia is very likely to be among those states bringing in some of the 10,000 Syrian refugees following President Obama's announcement Sept. 10. Photo courtesy Freedom House/Flickr

In the face of a mounting international tragedy, the Church is expected to respond for those who have no country, much less a home, and involvement from Georgia Baptist churches won't be the first time.

An email from World Relief, the humanitarian arm of the National Association of Evangelicals, called for American Christians to assist in helping the nearly 12 million displaced people – half estimated to be children – to "play a significant role in bringing hope to the vulnerable and oppressed." Southern Baptist agencies Baptist Global Response and Global Hunger Relief also provide outlets for helping. A list of questions explaining the Syrian conflict and how we got here is available at Baptist Press.

In dealing with the current crisis, Germany is expected to take in 800,000 refugees and along with France, Hungary, Italy, and Sweden, accept responsibility for 70% of the asylum applications from Syria, Afghanistan, and other countries.

Georgia Baptist Convention work among refugees began in the 1960s with the arrival of those seeking asylum from Cuba, says Jerry Baker of GBC Intercultural Ministries. "A lot of our ethnic congregations came from these refugee resettlements. That often began through churches reaching out to those refugees and providing basic needs – building relationships – with them but also many refugees were already Christians and would join the GBC to start their own churches. Some of the earlier churches were of Cuban, Russian, Romanian, and Laotian backgrounds.

"Many of the Cubans and Romanians were Christians, and so those churches were almost ready-made." 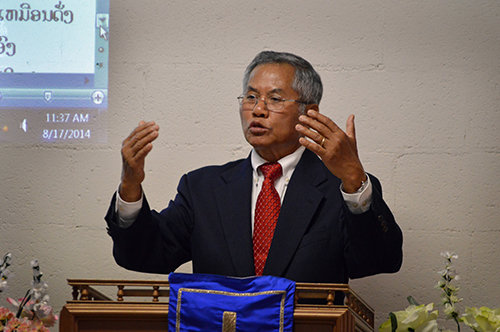 Oudone Thirakoune, pastor of Forest Park Lao Community Church, fled Laos in 1976 with his new wife Sompeng to Thailand before settling in Illinois. A friendship with a Home Mission Board missionary resulted in him becoming a Christian and eventual pastor and church planter. JIM BURTON/Special

One example of a church in operation today that grew from refugees is Forest Park Lao Community Church and Pastor Oudone Thirakoune, featured in a September 2014 article in The Index.

Thirakoune and his wife, Sompeng, fled Laos to Thailand in 1976 after communists took over his country following America's involvement in the Vietnam War. They would resettle in Chicago before a friend suggested he learn American culture by attending churches. Thirakoune would pray to accept Christ through a relationship with a Home Mission Board missionary and go on to earn bachelor, master, and doctoral degrees from Southern Seminary through an Atlanta extension directed by Georgia Baptist state missionary An Van Pham.

Pham himself is an amazing story. In war-torn Vietnam his father was killed in front of him. After accepting Christ, Pham was imprisoned but was reaching so many people with the Gospel he objected to being released. He and his family had to survive a harrowing overseas journey just to escape communist Vietnam. In Georgia, he planted Vietnamese churches but first was asked to establish Hispanic churches despite an English and Spanish language barrier, a problem remedied by 10-hour days of language classes.In 2007 he was honored as NAMB's Asian Church Planting Missionary of the Year.

What to (try) to expect

It's hard to tell just how many Syrian refugees will settle in Georgia, but according to the U.S. Office of Refugee Resettlement, the Peach State is among the upper half of states more likely to take in refugees and, along with North Carolina, leads states situated in the Bible Belt.

Why some states take in more refugees than others tends to fall along the size of the state, resources (especially housing) available, and if there is family or others from their country nearby. For decades, Georgia and particularly the metro Atlanta area welcomed thousands of refugees. The DeKalb County city of Clarkston along with Clarkston International Bible Church, a Southern Baptist congregation, not only welcomed refugees but incorporated them into the community through numerous programs such as job training and learning language skills.

In recent years, though, Georgia's welcoming spirit has been tested through officials' claims that resources of local and state agencies are being stressed through the increasing numbers of displaced persons.

America's history of taking in refugees began following World War II, as more than 250,000 Europeans came to the country. That led to the Displaced Persons Act of 1948, legislation that brought an additional 400,000 refugees.

Other legislation, along with help from private ethnic and religious organizations, helped those from eastern Europe, southeast Asia, and Cuba reach American shores in later decades. Since 1975, the U.S. has resettled more than three million refugees.