A tractor prepares to turn onto a dirt road and enter the cow pasture behind O'Quinn Baptist Church in Screven County. GOOGLE MAPS/Special
Posted Friday, May 19, 2017 4:20 pm
Scott Barkley

A tractor prepares to turn onto a dirt road and enter the cow pasture behind O'Quinn Baptist Church in Wayne County. GOOGLE MAPS/Special[/caption]

SCREVEN — O'Quinn Baptist Church typifies many congregations you'd find in Georgia. Situated in a rural area, a two-lane paved road runs in front of the church. Another road – this one dirt – splits the cow pasture out back. Facing the building from O'Quinn Church Road, a graveyard lies to the right. At left, a covered structure for outside gatherings partners with a basketball court, two sets of bleachers on either side. 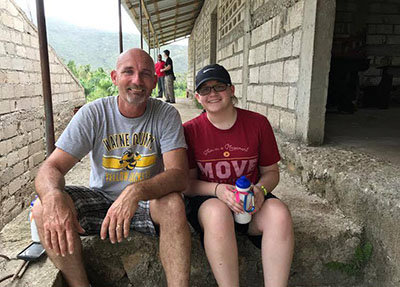 O'Quinn pastor Gerald Greenlee was accompanied on a Haiti mission trip this year by his daughter, Kyrslie. GREENLEE FAMILY/Special

And alongside an unmistakable rural setting, says Pastor Gerald Greenlee, is the congregation's community atmosphere and desire to share the Gospel.

"The majority of our congregation is spread among many families," says Greenlee in describing the church's makeup. "All sorts of opinions get heard." In other words, decisions aren't dictated based on a person's last name.

For instance, last year a member brought the possibility of a puppet ministry to Greenlee. The pastor liked the idea and before long it swept into motion. And while the ministry found its footing at O'Quinn, soon there were requests for Puppets of Praise (POP) to appear elsewhere.

"In the summer they'll help other churches during VBS. At our church, the group does evening services every 5th Sunday. It gets huge support from everyone in the church. And even though it's geared toward children, our senior adults love it," Greenlee points out. 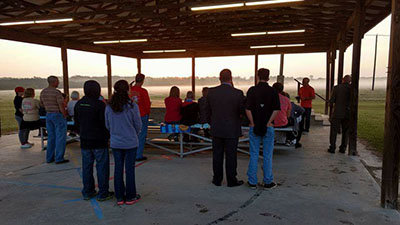 Last year, it was brought up that perhaps the POP ministry needed its own space. Setup and teardown for practice was done in the fellowship hall and ate up nearly half of the time allotted.

"From a ministry standpoint it was practical," recollects Greenlee. "From a financial standpoint, we needed to take it to the church and decide."

In the end, the decision brought about the current construction of a 20-X-25-ft building behind the church for the ministry. All of it will come about from donations. 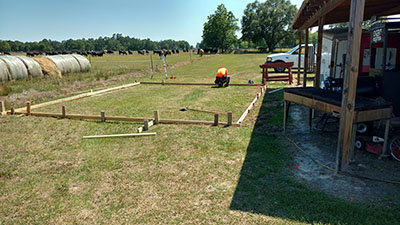 Recently, construction began on a separate building behind the church to serve as a storage and practice area for the church's Puppets of Praise ministry. OBC/Special

The outdoor structure has hosted fish fries, oyster roasts, and VBS commencements in the past. Some years, though, the heat and gnats (It is south Georgia, after all.) lead participants toward the conditioned air of the fellowship hall.

Still, folks love gathering outside. The church's annual spring fling fellowship happens there. So do Awana games on the basketball court. This summer, as they always have, youth will hang out on Wednesday nights. Easter's sunrise service beheld a magnificent pre-dawn scene. 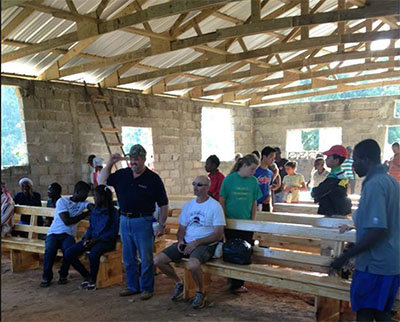 For the past several years O'Quinn Baptist Church members have participated in a mission trip to Haiti, where they partner with other stateside and local churches as well as missionaries to build and replace roofs. OBC/Special

Life at O'Quinn has necessitated changes. Presently, renovations are taking place in the church office area in addition to adding the puppet ministry workspace. Missions involvement is encouraged, as for the last four years members have accompanied Greenlee to Les Cayes, Haiti to work alongside missionaries in putting roofs on buildings. The church has welcomed a new minister of music, Reggie Burgess, to serve alongside Greenlee, Minister of Youth Paul McDuffy, and Cheryl Westberry, who heads up the puppet ministry.

But in talking with visitors, Greenlee notices a constant theme.

A group of cows seek shelter from the south Georgia sun under a tree across the road from O'Quinn Baptist and near the church's outdoor area that has hosted everything from fish fries to Awana games. GOOGLE MAPS/Special