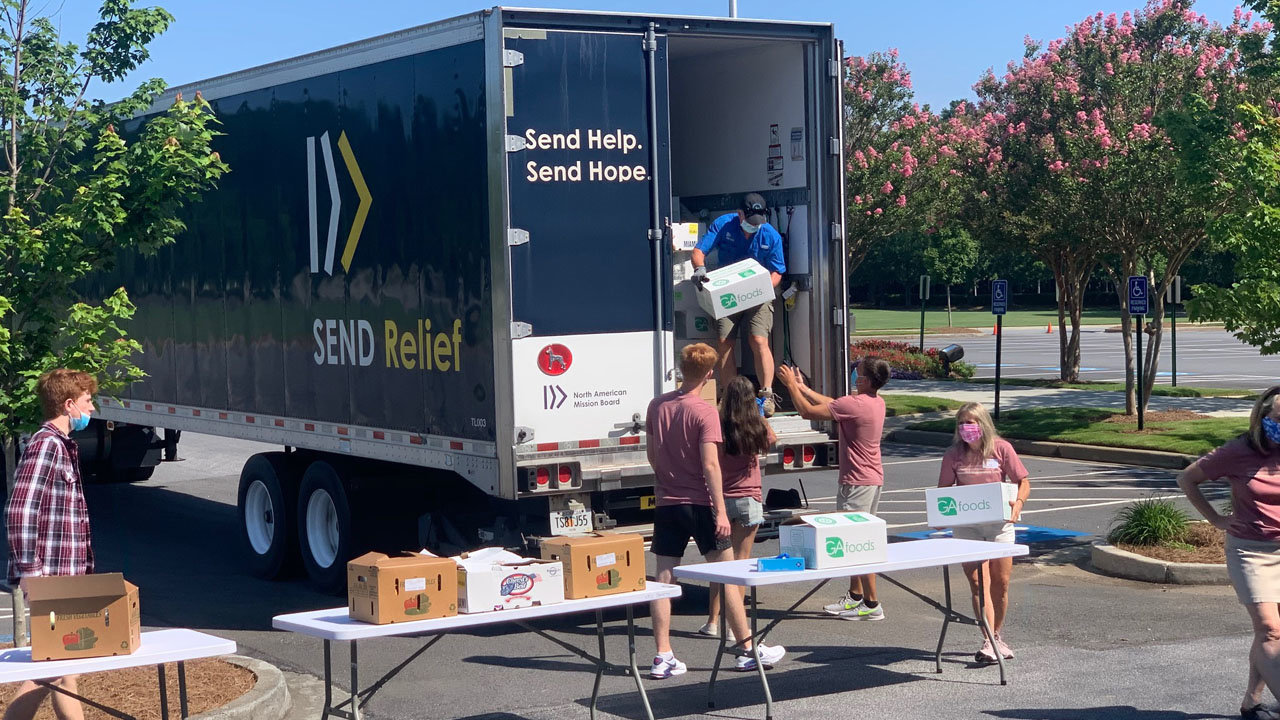 Send Relief assisted Georgia’s Fulton County School system in their distribution of food to families who receive free and reduced priced lunches during the school year. Send Relief helped store and deliver the food to churches that served as distribution points for the meals. Send Relief photo
Posted Monday, August 17, 2020 9:50 am
Baptist Press

Send Relief assisted Georgia’s Fulton County School system in their distribution of food to families who receive free and reduced priced lunches during the school year. Send Relief helped store and deliver the food to churches that served as distribution points for the meals. Send Relief photo

ALPHARETTA (BP) — School districts across the nation are striving to continue delivering food to children at risk when school buildings close due to the COVID-19 pandemic. When officials with Fulton County Schools, the fourth largest school system in Georgia that includes the city of Atlanta, needed assistance for their food distribution program, they reached out to the faith community, including the North American Mission Board (NAMB).

“The school system has maintained a relationship with the faith community since I’ve been here, under three different superintendents,” said Samantha Maxey, the director of community relations with Fulton County Schools. “They all felt it was important for the district to partner with our faith community, so much so that they included developing these relationships in the district’s strategic plan.”

Fulton County’s school district includes nearly 100 schools. Typically, those schools serve as the primary distribution point for breakfast and lunch when classes are in session. When the campuses close, whether for spring break or during a two-week period as the fall semester ramps up, the agency works with area churches that become distribution centers.

This year when August arrived, the district needed help storing perishable dairy items as they staged food ahead of distribution to various churches. Maxey thought of the Send Relief trucks she often saw in the parking lot as she drove by NAMB’s facility on North Point Parkway. Two of those semi-trailers have climate control, allowing them to store the refrigerated items provided by the Atlanta Community Food Bank.

“Everyone has been so gracious,” Maxey said of working with Send Relief. “It sounds simple when you make the request, but the little things make it really complex, and everyone that I’ve worked with has been amazing, saying, ‘Don’t worry about it. We’re going to get this done.’”

“What Elizabeth and our pastor, Craig Oliver, want people to know is that Elizabeth is there. We are in the community, and we are a resource for the people around us,” said Regina Rogers, coordinator of evangelism and missions at Elizabeth Baptist.

For Elizabeth Baptist, being a distribution point is one aspect of the church’s continued service to the communities around its five campuses, especially during the months of the COVID-19 pandemic. The church has built relationships, shared Christ, and prayed with with neighbors in nearby apartment complexes through an outreach called Operation Uplift.

“Our teams are blessed by serving people. It’s a great thing to know that you’re making an impact and serving the community,” Rogers said. “That is satisfying for us, and we feel that God is glorified through the ministry.”

First Baptist Alpharetta has also made a point of serving its community during the trying months of the pandemic, and the church was anxious to help FCS provide food for families in need. During the first week, roughly 100 families came to the church to pick up food, according to Jim Mason, mobilization pastor for the church.

“In a time where it would be very easy to pull back or for people to shy away from some of the needs,” Mason said. “It’s been really great to see some of the connections that we can build in the community in times like this and doors that are opening that maybe we didn’t have before.”

Mason said people have engaged with the church after being served. Some who are not even a part of the church have served alongside the church on a project, only to join later by viewing online or coming in person.

The spirit and eagerness of churches that want to serve their communities is one of the keys that leads Fulton County Schools to work with the faith community.

“I do this for a living,” Maxey said, “but I find so much personal gratification just watching these churches come together, different denominations, but all coming together to help their neighbors.”