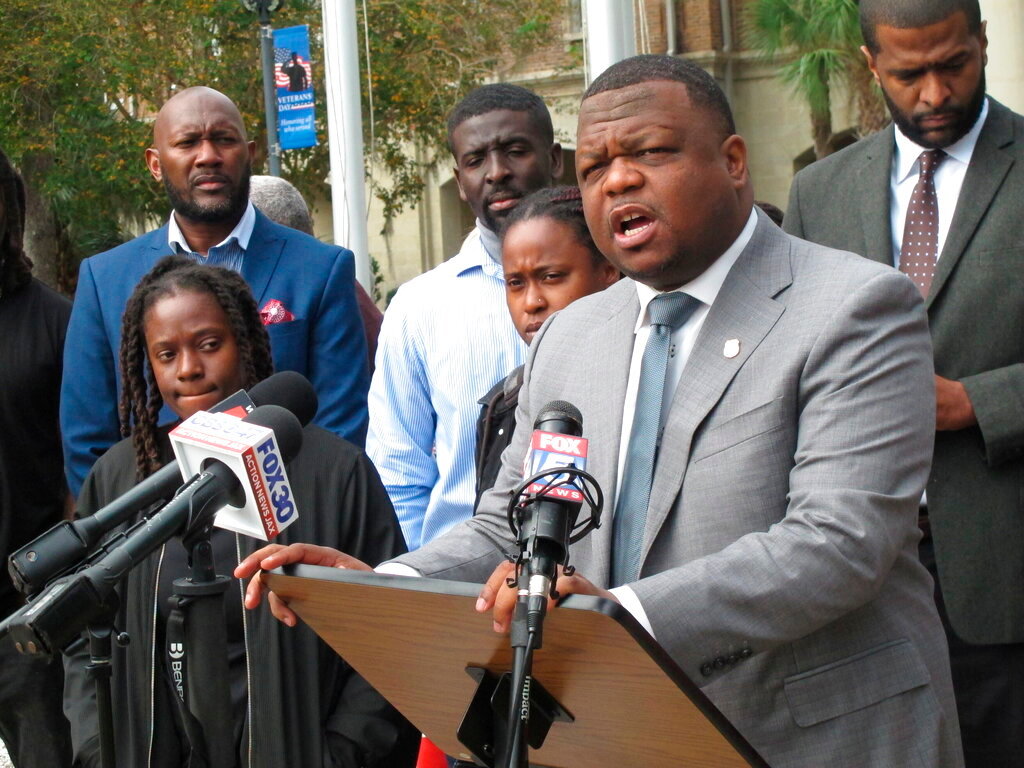 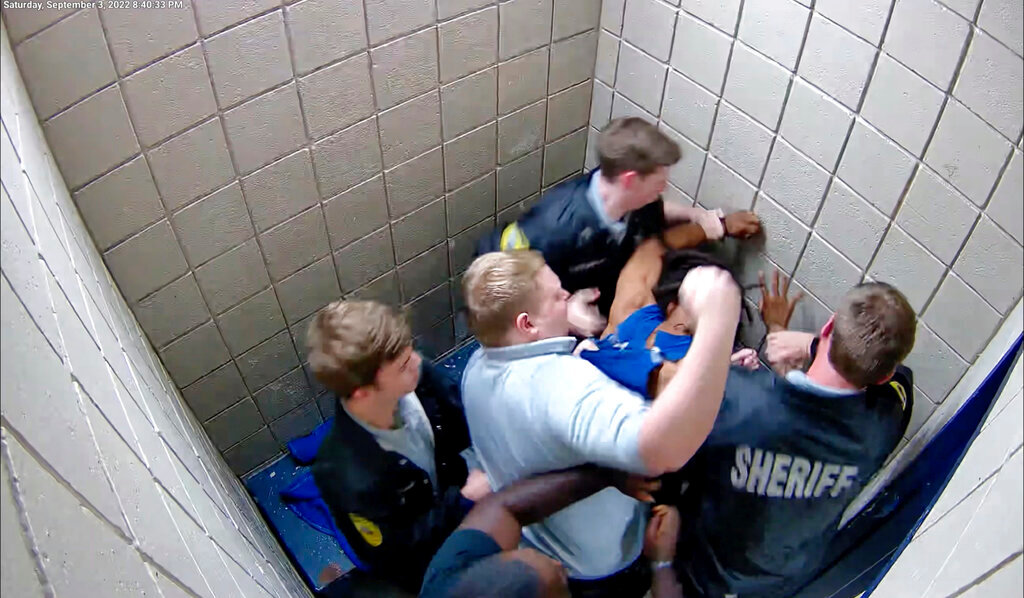 WOODBINE, Ga. (AP) — Attorneys for a Georgia jail detainee recorded by security cameras being punched by guards repeatedly in the head and neck called Wednesday for the deputies to be fired and arrested, insisting the videos show the violence was unjustified.

“There is no way in hell that anybody should be beaten the way this man was beaten," Harry Daniels, an attorney for the detainee, told reporters. "I don’t care what he did. I don’t care if he knocked the damned door down. You don’t beat a person like that.”

Jarrett Hobbs, a 41-year-old Black man from North Carolina, was booked into the Camden County jail in coastal Georgia on Sept. 3 on traffic violation and drug possession charges. Security video from the same night shows Hobbs standing alone in his cell before five guards rush in and surround him. At least three deputies can be seen landing punches before Hobbs gets dragged from the cell and hurled against a wall.

Two of Hobbs' sisters joined his lawyers Wednesday for a news conference on a courthouse square within view of the jail where the violent confrontation took place. His siblings said they want justice for their brother, whose story even they initially found hard to believe.

“He literally told me that he didn't do anything wrong, they just came in and beat" him, said Taylor Wood, one of Hobbs' sisters. “I'm like: Are you sure? It's kind of hard to believe. And then you see the video and he really didn't do nothing.”

Camden County Sheriff Jim Proctor, who oversees the jail, and the Georgia Bureau of Investigation have announced they're conducting separate investigations.

Hobbs' attorneys are questioning why the sheriff didn't investigate sooner, considering the incident involving Hobbs happened more than two months ago. Hobbs was charged immediately with fighting the guards.

Capt. Larry Bruce, the sheriff's spokesman, declined to answer questions Wednesday about the timing of the internal investigation and whether the deputies in the video remained on duty. The sheriff's office has not released the names or races of the deputies involved.

“The two independent investigations limit comment for now from the Sheriff’s Office,” Bruce said in an email.

The jail videos came to light because Hobbs of Greensboro, North Carolina, was on probation for a 2014 federal conviction. His Georgia arrest prompted an investigation into whether he had violated the terms of his supervised release. The jail footage became part of the evidence in that case.

According to federal court records, guards went into Hobbs' cell on Sept. 3 because he was kicking the door and refused orders to stop. The video shows a guard rush into the cell and grab Hobbs around the neck, trying to push him into a corner. Four others come in behind him.

As jailers try to hold Hobbs by his wrists, one of them starts punching Hobbs in the back of the head and neck. The video shows at least two other guards throwing punches. A second video from a camera outside the cell shows jailers dragging Hobbs through the open door and hurling him against a wall. The struggle continues until Hobbs, who is out of the camera frame, appears to be pinned on the ground. The entire confrontation lasts about a minute.

For most of the video, Hobbs is either obscured by the guards surrounding him or out of the camera frame. It's unclear to what extent he fought the jailers. Daniels said Hobbs would have been justified to fight back against an unlawful attack by the guards.

An Oct. 20 judge's order in the probation case said a probation officer testified that Hobbs had “punched one deputy in the face while punching another deputy in the side of the head. One deputy sustained a bruised eye and a broken hand as a result of the incident.” It also noted that Hobbs was punched in the head and that the probation officer was “unaware of the exact sequence of events.”

Hobbs' probation was revoked on Nov. 7. However, the court dismissed alleged probation violations based on the struggle with jailers in Georgia. The court record doesn’t say why.

Hobbs was released from the Camden County jail on Sept. 30, but he remains in custody in North Carolina.